Geronimo’s actual Apache name means “One who yawns.”  After his wife, children and mother were killed by Mexican soldiers in 1858, it seems he did little yawning and much fighting, leading raids against both Mexican and American settlers and soldiers.  Although Geronimo’s hatred was mainly directed at the Mexicans, his raids of theft and murder of Americans had the U.S. Army chasing him and his band of warriors across the southwest, while the Mexican Army did the same South of the border, also with negative results; however, the borders meant little to Geronimo, as the Native Americans thought they owned the land in the first place.

Geronimo’s tribal heritage was Bendonkohe, a subgroup of the Native American tribes generically called Apache by whites.  Although himself not a tribal chief, he was the leader of his band of Native American resistance forces that fought pacification.  When he surrendered, he was taken from fort to fort across Texas and the South before settling at Fort Sill, Oklahoma.  He never returned to his native lands.

Geronimo was allowed to make appearances at wild west shows as a celebrity, and he rode in Teddy Roosevelt’s presidential inaugural parade in 1905.

Panorama of the inauguration ceremony

He died at Fort Sill of pneumonia in 1909 after falling from his horse and laying in the cold all night.

The Winchester rifle he had with him at the time of his surrender is on display at the U.S. Military Academy at West Point, while his pistol and knife are at the museum at Fort Sill. 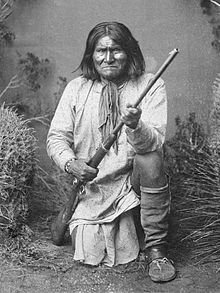 A controversy over whether or not his skull and possibly other bones had been stolen during World War I has never conclusively been resolved, although it is likely to be a hoax.  Another controversy continues over whether his surrender was unconditional, as the U.S. Army claims and which Geronimo later vehemently denied, or if Geronimo had been tricked, as he claimed.  Geronimo has been called “the worst Indian who ever lived” and “Geronimo the Terrible,” but in a History and Headlines twist his name is yelled by American airborne paratroops as they jump out of airplanes.  And he ended up having a total of 9 wives!  He sure had a full life for a guy who yawned a lot.

Question for students (and subscribers): Should Geronimo have continued to fight?  Please let us know in the comments section below this article.

For another interesting event that happened on September 4, please see the History and Headlines article: “10 Infamous, Notorious and Reviled Products.”