In World War II, just as in World War I, the German Navy had a particularly effective submarine force, and the Royal Navy was well aware of the danger these U-boats posed.  Thus, HMS Courageous (pictured) was escorted by 4 destroyers while patrolling the Western Approaches to the British Isles upon outbreak of war in September 1939.  U-29 carefully stalked the converted (1928) light cruiser and when the Courageous turned into the wind to launch planes, the sub found its target perpendicular to its bow torpedo tubes.  The 786 feet long 27,000 tonne (loaded) carrier went down in 20 minutes, making History the hard way.  Facing tenacious U-boat attacks, 5 of the 8 British carriers lost in combat during World War II were lost to torpedo attacks by submarines.  They include fleet carrier HMS Ark Royal sunk by U-81 in 1941, escort carrier HMS Audacity sunk by U-751 in 1941, escort carrier HMS Avenger sunk by U-151 in 1942, and fleet carrier HMS Eagle sunk by U-73 in 1942.  The only Royal Navy aircraft carrier sunk by the Japanese Imperial Navy was the fleet carrier HMS Hermes, sunk by aerial attack.  Note that the U-boats had no success against carriers after 1942, implying that the Royal Navy had learned their lesson and took great pains to protect their aircraft carriers from the U-boat menace.

The US Navy lost a total of 13 small and large aircraft carriers during World War II of which only 4 were sunk by submarine attack.  The only US aircraft carrier lost to the Germans was the escort carrier USS Block Island (pictured) sunk by U-549 off the Canary Islands in 1944.  Escort carrier USS Liscome Bay was sunk by Imperial Japanese Navy (INJ) sub I-175 in 1943, and fleet carrier USS Wasp was sunk by I-19 in 1942.  Fleet carrier USS Yorktown was sunk during the Battle of Midway while being towed to Pearl Harbor for repairs due to heavy damage from aerial attack.  The tough ship was finished by torpedoes from I-168.  Since 1942, no US fleet (full size) carrier has been sunk in combat. 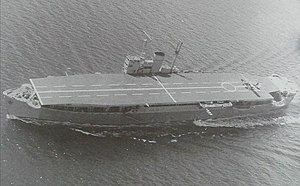 Question for students (and subscribers): How have aircraft carriers and their role in warfare changed over the course of military history?  Please let us know in the comments section below this article.

The featured image in this article, a photograph of the Courageous Class fleet aircraft carrier HMS COURAGEOUS taken by a Royal Navy official photographer circa 1935, is photograph Q 65692 from the collections of the Imperial War Museums (collection no. 4510-02).  This work created by the United Kingdom Government is in the public domain, because it is one of the following: