Monday, August 10
Trending
You are at:Home»Society»Military»November 30, 1864: Confederates Lose 14 Generals and 1/3 of Troops at the Battle of Franklin

On November 30, 1864, Confederate Lieutenant General John Bell Hood set what has to be a record for an American general for getting his subordinate generals killed and wounded after ordering an epic fail charge against Union forces led by Major General John M. Schofield at the Battle of Franklin in Tennessee during the American Civil War.

The opposing forces started out virtually dead even, with 27,000 troops on each side.  Hood planned to attack the Union forces with a frontal assault even though his cavalry commander, Major General Nathan Bedford Forrest, counseled instead for an envelopment of the dug-in Union troops and a cut-off their escape route.

The attack was brave, but ill considered.  The slaughter totaled tremendous losses among the Confederate officers not seen in any other battle in U.S. history.  Besides the 6 generals killed, another 7 generals were wounded, and 1 was captured.  Going down the line of command, 55 regimental commanders were killed or wounded!  Although the Union Army suffered over 2,300 casualties, less than 200 of those were deaths.  An additional 1,100 Union troops were captured or missing, bringing the number of casualties up to 9% of their total force.

In contrast, 1,750 Confederate soldiers were killed and another 3,800 wounded.  Adding in 702 for those captured or missing brings the number up to 6,252, a third of the total number of troops used in the attack (as several thousand Confederate troops were not yet in position to participate in the attack).  The action became known as “The Pickett’s Charge of the West,” a comparison to the futile assault on Union lines at Gettysburg a year earlier.

Hood has been accused of acting out of frustration and anger that the Union forces were outmaneuvering his men, and his rash response caused the disaster.  Some recent scholars, however, have claimed that Hood was over his anger by the time of the attack and had ordered it with a clear head.  In either case, the attack was so determined that a partial breakthrough took place, and the attack almost succeeded.  Forrest did try to outflank the Union lines, but was repulsed by a smaller force, some of whom were armed with Spencer repeating rifles, which gave them a decisive advantage against the larger Confederate cavalry force.

Schofield declined the opportunity to counterattack the next day to make his victory complete and instead withdrew his forces, leaving Franklin to the Confederates.  Hood’s forces were so depleted and bloodied that when they marched off to fight at the Battle of Nashville, they were so readily and utterly defeated that the Army of Tennessee was no longer a factor in the war. 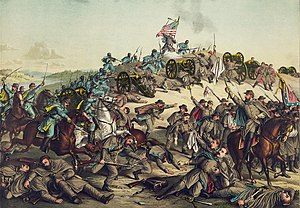 After the war, Hood moved from Texas to Louisiana where he died of yellow fever in 1879 at the age of 48.  As his wife and his eldest child had already died of the disease, his other 10 children were left orphaned.  Fort Hood, Texas, is named after him.

Question for students (and subscribers): Should anything still be named after Confederate generals?  Why or why not?  Also, if so, what?  Please let us know in the comments section below this article.

Knight, James.  The Battle of Franklin: When the Devil had Full Possession of the Earth.  The History Press, 2009.

The featured image in this article, Battle of Franklin (1891) by Kurz and Allison (restoration by Adam Cuerden), is available from the United States Library of Congress‘s Prints and Photographs division under the digital ID pga.01852.  This work is in the public domain in the United States because it was published (or registered with the U.S. Copyright Office) before January 1, 1923.