Tuesday, August 4
Trending
You are at:Home»Society»Military»The Near Suicidal Charge of the Light Brigade during the Crimean War

On October 25, 1854, the United Kingdom, the Ottoman Empire, and the French Empire fought against Russia in the Battle of Balaclava, which included the famous (and disastrous) “Charge of the Light Brigade”.

The Crimean War (October 1853 – February 1856) was an absolutely massive war, easily one of the most significant wars fought between Napoleon’s defeat at Waterloo in 1815 and the onset of World War I in 1914.  An Alliance of France, the Ottoman Empire, Britain, and the Kingdom of Sardinia challenged the Russian Empire and Bulgaria.  The Franco-British-Ottoman alliance enjoyed a strength of a million men versus some 720,000 Russo-Bulgarians.  The combined dead would tally around 700,000 to 825,000.

In such a costly struggle, without any doubt the single most famous aspect of the fighting concerns the  Siege of Sevastopol (October 17, 1854 – September 9, 1855) in the present-day Ukraine.  The Battle of Balaclava was part of that Allied effort to take Sevastopol. 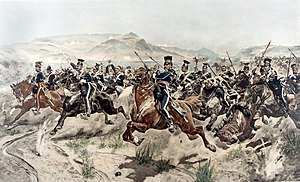 Charge of the Light Brigade by Richard Caton Woodville, Jr.

During the battle, Britain’s Lord Raglan planned on sending the Light Brigade, which consisted of light cavalry, to chase after and harass a retreating Russian artillery battery.  Unfortunately, the orders were not accurately received and so instead the Light Brigade, armed with sabres launched a frontal assault against a different, better-prepared artillery battery.  As a result, the Light Brigade was mauled, suffering incredibly high casualties, suffering perhaps 270 or more losses out of a force of 670 or so, i.e. losses of at or above fifty percent!

We have two outstanding and memorable descriptions of the engagement which capture the essence of the brave, but futile attack.  First, is Alfred, Lord Tennyson’s famous poem, “The Charge of the Light Brigade”, now in the public domain and so reproduced below:

‘Forward, the Light Brigade!’
Was there a man dismay’d?
Not tho’ the soldiers knew
Some one had blunder’d:
Theirs not to make reply,
Theirs not to reason why,
Theirs but to do and die:
Into the valley of Death
Rode the six hundred.

Flash’d all their sabres bare,
Flash’d as they turned in air
Sabring the gunners there,
Charging an army while
All the world wonder’d:
Plunged in the battery-smoke
Right thro’ the line they broke;
Cossack and Russian
Reel’d from the sabre-stroke
Shatter’d and sunder’d.
Then they rode back, but not
Not the six hundred.

More succinct was French Marshal Pierre Bosquet’s summation of the charge of the Light Brigade:  “C’est magnifique, mais ce n’est pas la guerre.  C’est de la folie” (“It is magnificent, but it is not war.  It is madness.”).

Pierre Bosquet during the Crimean War

Despite the debacle, Britain and its allies would eventually go on to win the war.  Thus, despite such monumental disasters as the Charge of the Light Brigade, an alliance of Britain and Napoleon III’s France achieved what Napoleon I’s France did not pull off in 1812: a successful invasion of the Russian Empire!

Question for students (and subscribers): Do you have a favorite poem about war?  Please let us know in the comments section below this article.

.  For a nice illustrated online history of the event, head over to the BBC’s website.

Share. Twitter Facebook Google+ Pinterest LinkedIn Tumblr Email
Previous ArticleTalk about a Birthday Bash! The First Person to go Over Niagara Falls in a Barrel
Next Article The Austrian General who Destroyed the city of Skopje to Prevent the Spread of Cholera