On May 27, 1907, in the aftermath of the 1906 San Francisco earthquake, the city by the bay came down with an epidemic of Bubonic Plague, the same plague responsible for the infamous “Black Death” in earlier centuries.

San Francisco had its first bout with Bubonic Plague from 1900 to 1904, initially covered up by the Governor of California who did not want to scare off investors and people from moving to the area.  (Note: Governments lie, and lie and lie!)  When the crisis was made public, Chinese immigrants were initially blamed, another step in a long history of discrimination against Chinese immigrants in the United States.  An attempt to inoculate people, especially Chinese immigrants, against the Plague went wrong when the vaccine was found to be toxic (and it did not work).  This round of Plague killed 113 of the 121 people reported to have contracted the disease.  Efforts to clean up the city and conducting a war on the population of rats finally “eradicated” the Plague in Frisco, or so they thought!

After the great Earthquake and Fire of 1906, large parts of the city were in ruins, and once again the rat population boomed, and sure enough, with the rats came the fleas that carried Bubonic Plague and another epidemic was upon San Francisco.  This time, the epidemic was even more widespread, with a reported 159 cases within a year and a total of 281 people became ill with the Plague and 190 died.  The 1907 epidemic spread wider across the city and across social strata, as opposed to the 1900 outbreak that was largely confined to poor areas and Chinese neighborhoods.  This time around authorities were quicker to deal with the actual problem, and the response quickly mitigated the problem.  The war on rats this time was an enormous effort, with over 350,000 rats caught and killed, and another estimated 1.65 million rats killed by poison and not recovered.  Other flea carrying mammals also were killed, including over 15,000 mice, 194 gophers and 2 dozen squirrels.  Dr. Rupert Blue had commanded the anti-rat effort, and what a campaign he ran!  Blue employed lab scientists to test rats captured and promulgated information to the public about sanitation (keeping garbage cans closed tightly, not leaving food scraps about, keeping basements and homes tightly closed against rats) and to let authorities remove rats in traps or found dead (do not touch the filthy things!).

The cost of this war on rats was over $50,000 a month, but considering many countries had imposed quarantines against San Francisco, the price was worth it, and the Federal Government chipped in as well.  Over 5600 pounds of bacon and cheese were used to bait traps, with an additional 6500 loaves of bread.  Hundreds of rat catchers and “sanitary engineers” were employed.  Dr. Blue’s efforts led to victory against the rats and the Plague by 1910, and in 1912 Dr. Blue became Surgeon General of the United States. 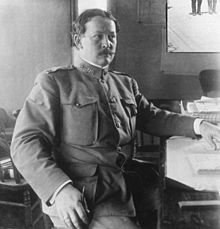 Bubonic Plague still affects other countries (1000 to 2000 victims annually worldwide), and even the United States gets a few cases per year, with a variety of rodents (rats, squirrels, prairie dogs, etc) carrying the fleas that carry the disease.  A recent series of reports that ISIS has issued a “fatwa” (holy order) to kill cats and kittens in areas occupied by the Islamic terrorist group and to prohibit the owning or breeding of cats could well result in an extreme population boom of rats in the affected areas, if the story is true.  (Snopes says the reports are not verified.)

Have you been inoculated against Plague?  I have!  In fact, US military service members going overseas are routinely immunized against Plague, but only for duty that puts members in particular danger of contracting Plague.  Normal tourism does not require Plague vaccination.

Question for students (and subscribers): Do you or anyone you know have any experience with Bubonic Plague (or other types of Plague)?  If so, please share your stories with our readers in the comments section below this article. 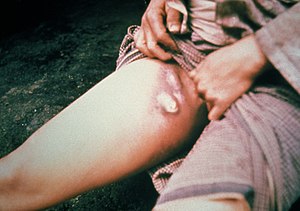 A bubo on the upper thigh of a person infected with bubonic plague.