On May 17, 1974, the Los Angeles Police Department engaged the radical Symbionese Liberation Army in one of the most famous gun fights in the history of the LAPD, a fight in which an incredible 9000 rounds of ammunition were expended!

The SLA was the radical group that had kidnapped heiress Patty Hearst and turned her into one of their minions. Led by an escaped African-American criminal, Donald DeFreeze, known to his members as “General Field Marshal Cinque” (and apparently the duped group members did not find this hilarious?), DeFreeze was in fact the only Black member of the “army.” The SLA was to be a representative organization of all left wing radical groups, protesting racism, capitalism, and sexism. To further these goals, the SLA engaged in bank robberies and murder, along with plotting other acts of violence.

A notable 1973 SLA murder was of a school superintendent that had planned to issue students ID cards, a “racist” program in the eyes of the SLA. Sadly, the victim, Marcus Foster, was himself African-American and a respected educator by the Black and Left communities.

The high profile kidnapping of Patty Hearst in February of 1974 and her subsequent involvement in bank robberies that followed brought national attention to the SLA and the heat from law enforcement turned up considerably. A botched shoplifting event at a sporting goods store led to Hearst shooting her gun to help cover the escape of SLA members, generating sensational news.

The shoplifting incident led to tips about the whereabouts of the SLA ‘safe house’ and on May 17, 1974, over 400 police officers descended upon the scene at East 54th Street and ordered the allegedly heavily armed occupants out by bullhorn. An older man and child exited, with the child spilling the beans about armed people inside. Those suspected occupants failed to respond to orders to vacate the house, so tear gas was fired into the house, eliciting automatic gunfire back at the cops. The 6 SLA members inside were indeed heavily armed, and had fully automatic (machine gun) M-1 carbines among their large cache of firearms. SLA members also threw home-made grenades at the police, without wounding any cops.

After 5000 rounds fired by the police and 4000 rounds fired by the SLA, dozens of tear gas canisters launched into the house by the police, creating fires, the 6 SLA members were finally all killed from gunshots or smoke inhalation, including Donald DeFreeze who had shot and killed himself during the shootout. Incredibly, not one single police officer had been hit by any bullets, nor were any bystanders hit with errant shots. (This incident has to be the all-time record of shots at police without hitting any cops.) 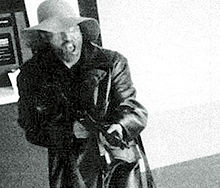 Not only did live news coverage broadcast the shootout to the public, Patty Hearst and other SLA members not at the shootout actually watched the event on television! Hearst was captured in 1975 and convicted of her participation in SLA crimes, but later pardoned by President Clinton.

Question for students (and subscribers): If you can think of a more bizarre police shootout, please share it with us in the comments section below this article.

Findley, Tim and Les Payne.  The Life and Death of the SLA (Symbionese Liberation Army) : A True Story of Revolutionary Terror.  Ballantine Books, 1976.