Tuesday, August 4
Trending
You are at:Home»Lifestyle»Food»May 14, 2018: What Exactly are Chickens? (National Dance Like a Chicken Day)

On May 14, 2018, we celebrate another one of those goofy pseudo-holidays, this time National Dance Like a Chicken Day, a day in which we acknowledge the superiority of that wedding reception standby (along with the Hokey Pokey), the Chicken Dance. Of course, we must also delve into what chickens are and how they are important to us.

Long before there was a Chicken Dance, people kept Chickens not for food, but for entertainment. About 5000 years ago in Asia people started keeping the Red Junglefowl (perhaps crossbred with the Grey Junglefowl), the bird that evolved into the domestic Chicken. The Red Junglefowl looks quite similar to our domestic Chicken, perhaps a bit more colorful. Originating in what is now India, human domestication of Chickens spread throughout the world, reaching Europe (Greece and Ukraine) about 3000 BC and Egypt about 1500 BC. Scientists have not universally decided if any of the South American varieties of Chicken actually pre-date Columbian exploration or if they arrived thousands of years earlier. It is widely believed that Chickens were first kept and bred for the purposes of cockfighting, a means of entertainment instead of for food. Obviously, although the “sport” of cockfighting still exists (in many places illegally), the main reason people keep Chickens if for food, both eggs and meat. 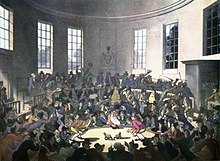 Chickens are the most common bird in the world due to human animal husbandry and provide the vast majority of avian eggs consumed by humans as well as meat. Today about 20 billion Chickens are kept by humans! In the United States, the average person now consumes about 92 pounds of Chicken per year, more than triple the 1960 American Chicken consumption. Chicken has not only surpassed Beef as the primary source of animal protein in the US, the amount of Chicken consumed by Americans almost equals that of Pork and Beef combined. (Fish and shellfish account for about 16 pounds per American per year.)

While Americans ate over 400 eggs per person per year in the 1940’s, concerns about cholesterol reduced American egg consumption to an all time low of 229 apiece in 1991, but the number of eggs eaten each year by Americans has begun to rise again, with new studies indicating that eggs are NOT responsible for increased cholesterol in the human body. Today about 250 eggs per American are consumed annually.

In the 1950’s, Werner Davos from Switzerland recorded a lively and catchy tune for the accordion that is commonly referred to as “The Chicken Dance,” or “The Bird Song.” Oddly enough, the song was originally titled “Der Ententanz” which means “The Duck Dance” in German! Somehow the name of the tune evolved into “The Bird Dance” and then “The Chicken Dance.” Obviously, a goofy elbow flapping dance goes along with the song, and it is this that we celebrate today. So let yourself forget about dignity and decorum and flap those elbows with glee, AND DANCE LIKE A CHICKEN! Like you mean it!!! 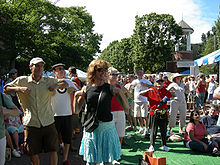 All you have to do to celebrate Dance Like a Chicken Day is to perform at least one Chicken Dance. Thank you. Now enjoy one of the bajillion ways Chicken is prepared for the eating table, and we hope you had a nice omelet for breakfast.

On a related subject, there was also a dance during the 1960’s for rock and roll enthusiasts called The Frug that had in turn evolved from another dance craze from the 1950’s called The Chicken. An adaptation of the The Twist, by throwing in lateral movements as a change of pace, The Chicken was further refined when Rufus Thomas recorded “Do the Funky Chicken” in 1970, another iteration of The Chicken. If you are 60 to 80 years old, you may remember the days when dances were named after associated songs and vice versa.

Aside from the incredible amount of ways to eat Chickens and their eggs, this type of fowl are also kept for showing and for pets. Eggs can become Easter decorations or the means by which minor vandalism is achieved. (Bombs away!) Chicken feathers and other by-products provide a myriad of products that make our lives better each day.

The featured image in this article, a photograph by Infrogmation of New Orleans of children learning the “Chicken Dance,” is licensed under the Creative Commons Attribution-Share Alike 3.0 Unported license.