Thursday, July 9
Trending
You are at:Home»Lifestyle»Health/Medicine»Masculinity, Toxic or a Virtue?

On July 23, 1973, American pilot and national hero, Eddie Rickenbacker, died at the age of 82, later buried in his native Columbus, Ohio, the city of his birth.  Rickenbacker was the leading American flying “Ace” in World War I, having shot down 26 enemy aircraft and being awarded the most medals of any American war hero of World War I, including the coveted Medal of Honor.  Prior to his wartime exploits, Rickenbacker had been a premier race car driver and automotive designer.  After various other pursuits, Rickenbacker became the head of Eastern Airlines in 1935, a position he held for decades, including buying the airline in 1938.  Eddie Rickenbacker was certainly an example of a “manly man,” a truly masculine example of American manhood, but today many people question whether or not the societal norm of “masculinity” is really a “toxic” creation” and not something worth celebrating or continuing in today’s world.

Historically, male human beings were tasked with the heavy labor and dangerous jobs of hunting and gathering as well as fighting in defense of the family or tribe.  Women were usually relegated to activities around the home or campsite, tied to their children by the necessity of breast feeding in the millennia before baby bottles and formula were invented.  Men being, on the average, bigger, stronger, and faster than women made men more efficient at hunting, fighting and building.  As social animals, people developed a division of labor by which people specialized in what they were good at for the greater good.  A crippled hunter might become the guy that builds bows and arrows, while another particularly good at chipping stones might have become the local maker of stone tools.  Using each person in the capacity best suited to the needs of the group, rather than the desires of the individual is what made humans successful.  (Some women are bigger, stronger, and faster than some men.  Should they be allowed to serve in any capacity they can physically accomplish, such as military infantry?) 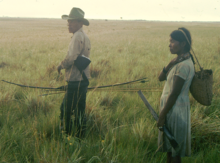 Savanna Pumé couple on a hunting and gathering trip in the llanos of Venezuela. The man carries a bow, three steel-tipped arrows, and a hat that resembles the head of a jabiru stork as camouflage to approach near enough to deer for a shot. The woman carries a steel-tipped digging stick and a carrying basket for collecting wild tubers.  Photograph by Russell D. Greaves.

Ah, but then modern times come along and with them, innumerable innovations and inventions that have changed our ways of life drastically, changing the model for success as a species.  Using machines, a woman is as strong as the strongest man, and presumably can operate a power shovel, bulldozer or crane as well as any man.  With baby bottles and formula, a man can stay home and feed the baby, largely removing the argument for women to be kept at home.

Today, instead of seeing masculinity, with its stereotypical strength, machismo and aggression as an asset, some folks are calling such traits a detriment to society, a liability.  The subject of “toxic masculinity” seems to have become a cause celebre, with articles easily found on the subject from the New York Times to Psychology Today, to The Atlantic.  It seems men are under attack, accused of being brutish louts itching for a fight and bullying anyone smaller or weaker than themselves.  Men are being accused of “microaggressions” for simply holding a door for a woman or girl!  Baffled men see these alleged acts of “microaggression” as normal, well intended acts and words, not as attacks on people of another race or gender.  “Victims” see these microaggressions as subtle, but substantial, ways to create a social strata that puts the man above the female human in power and value.

A “one-knee” proposal on the High Line in New York City.  Photograph by Victorgrigas.

Men are being accused of striving for a model of strength, stoicism, virility, and dominance that is actually bad for society.  Today, we are undergoing an epic change in our opinions and definitions of gender and sex, let alone gender roles.  Do we even want to have gender specific identities anymore?  With sexual reassignment surgery becoming more common, what really is a man or a woman?  Should we even be concerned about such labels or are we all best served by allowing people to identify any way they want, anytime they want?  Or do social norms and mores make for a more predictable and orderly society, a more efficient model for people to succeed by?  The great sociological pioneer, Emile Durkheim, came up with the concept of “anomie,” defined by Encyclopedia Britannica as “Anomie: Anomie, in societies or individuals, a condition of instability resulting from a breakdown of standards and values or from a lack of purpose or ideals.”  Do we risk throwing our culture into a sort of normlessness and confusion by removing social archetypes, such as masculinity?

Rather than throw up our hands and just give up on the subject, we offer here a few thoughts on what it is to be a “man” in today’s world:

While we could go on and on, as could most people, we will stop here and allow our intelligent readers the opportunity to submit their opinions on these subjects.  The issues are complex, rooted in biology but tempered by technology and skewed by cultural bias, traditions and opinions.  Our list is certainly not complete and all encompassing, but is a brief, general suggested guideline for boys to aspire to.  (Of course, we are well aware that people are really not created equal, nor are they likely to stay the same throughout their lives.  Physical and mental limitations greatly affect one’s ability to adhere to suggested standards, as does aging.  We know!)  Before women and girls get all mad about a “masculinity” list, please feel free to submit your ideas about “femininity” and suggested traits for females to aspire to.  Or for that matter, should all humans aspire to all these suggestions?  (Many of our suggestions are equally appropriate for women and girls.) 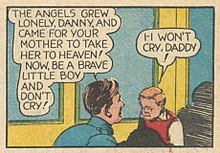 According to social learning theory, teaching boys to suppress vulnerable emotions, as in the saying “big boys don’t cry”, is a significant part of gender socialization in Western society.  Comic book panel from page 3 of Blue Beetle #1 (1939) by Lou Fine for Fox Feature Syndicate.

Question for students (and subscribers): Is there really such a thing as “toxic masculinity?”  Are men dangerous to society unless things change?  What attributes do you believe are important for a “masculine man?”  Are there any differences in what a man or a woman should be?  Please let us know in the comments section below this article.

Sexton, Jared. The Man They Wanted Me to Be: Toxic Masculinity and a Crisis of Our Own Making. Counterpoint, 2019.

The featured image in this article, a photograph of First Lieutenant E. V. [Eddie] Rickenbacker, 94th Aero Squadron, American ace, standing up in his Spad plane. Near Rembercourt, France, 18 October 1918, is a work of a U.S. Army soldier or employee, taken or made as part of that person’s official duties. As a work of the U.S. federal government, the image is in the public domain.  This media is available in the holdings of the National Archives and Records Administration, cataloged under the National Archives Identifier (NAID) 530773.