On March 5, 1770, British soldiers opened fire on a group of unarmed American protesters, killing 5 (either 3 or 4 immediately, one dying later), an event referred to as The Boston Massacre, sometimes called the first shots fired in the American Revolutionary War. The first American gunned down was Crispus Attucks, a freeman of African and Native American descent.

Described in contemporary documents as a “mulattoe,” Attucks was of mixed race, definitely of African and Wampanoag descent, possibly with White mixed in. It is not known if he was a runaway slave, or if he had been freed. 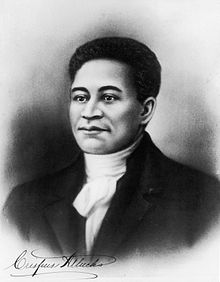 Speculative posthumous portrait of what Attucks may have looked like

By 1770 tensions in America between colonials and the British overlords had become strained, and when a group of Americans started heckling and harassing a British soldier several other British soldiers came to the sentry’s assistance. The mob of irate Americans continued their tirade against the “lobsterbacks,” so called because of their bright red uniforms, even to the point of poking them in the chest. After repeated orders to disperse and threats to open fire, the British suddenly fired on the crowd, killing the 5 martyrs. 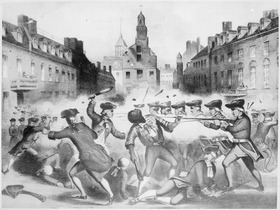 This 19th-century lithograph is a variation of the famous engraving of the Boston Massacre by Paul Revere. Produced soon before the American Civil War and long after the event depicted, this image emphasizes Crispus Attucks, who had become a symbol for abolitionists. (John Bufford after William L. Champey, ca. 1856)

Irate Americans demanded the soldiers involved be tried for murder, and 8 of the Redcoats that had fired were tried, with future President John Adams acting as their attorney. Adams argued that the mob, which he called “a motley rabble of saucy boys, negroes, and molattoes, Irish teagues and outlandish jack tarrs [i.e. sailors]” presented a threat to the soldiers and that the shooting was in self-defense. The trial resulted in 6 acquittals and 2 convictions on the lesser charge of manslaughter, the 2 convicted soldiers branded on the hand as punishment. The argument for avoiding the death penalty was the English claim of “benefit of clergy” which originally pertained to the clergy to avoid extreme punishment, and in this case referred to the soldiers acting in context with their position of duty as mitigation for their actions.

Attucks had been born in Massachusetts around 1723 (thus 47 at the time of his death), a slave of a local Deacon. A 1750 advertisement by Deacon Brown for a runaway slave called “Crispas” may refer to Attucks. It is believed Attucks had become a sailor or a whaling man after running away, although his status as either a “runaway” or a “freeman” is debated by historians. He may have used an alias, Michael Johnson, to avoid arrest. Contemporary accounts do not refer to him as a Negro, but as either mixed race or as an Indian. The term, “mulattoe,” as used in 1770 may have referred to a full blooded Native American or a person of any mixture of races, not necessarily an African American mixed race person. It could even refer to a lighter skinned African.

In any case, it is probable that Attucks was in some form of African descent, and both African Americans and Native Americans proudly point to his sacrifice as an early martyr to the American Revolution and Independence. History has likewise honored the sacrifice of Crispus Attucks and the other 4 martyrs of the Boston Massacre, and his name was invoked by abolitionists. Even Stevie Wonder referred to Attucks in his song, “Black Man,” referring to Attucks as “First man to die for the flag we now hold high was a black man.”

The Boston Massacre was commemorated by Paul Revere in a famous engraving copied from an engraving by Harry Pelham and the event is considered to be the tipping point in revolutionary fervor leading to American Independence. The 5 men killed that day are often referred to as the first casualties of the American Revolution.  The name Crispus Attucks deserves a place on the honor roll of African American heroes. Question for students (and subscribers): What other African American heroes do you look up to?  Please let us know in the comments section below this article.