On March 29, 1927, the British once again invaded the United States, this time to make war on the land speed record!  In the first instance of a foreign power making such an attempt at Daytona Beach, Florida, a Sunbeam 1000 Horsepower car became the first automobile to exceed 200 mph with a run of 203.79 mph.  The name of the car, “1000 Horsepower,” was not the only odd thing about the speedster, as it was also nicknamed “The Slug!”

Powered by 2 aircraft engines, one positioned in front of the driver and the other positioned behind him, the final drive was conducted from the transmission to the rear axle by 2 chains, an iffy proposition even for that time.  The chains were encased in an armored steel box to prevent injury to the driver should they fail.  The Sunbeam Matabele 22.4 liter (or litre if you want to be British about it) engines were designed for airplanes and had previously been used on speedboats.  Each engine produced about 450 horsepower, so the “1000 Horsepower” name was not really accurate, but then again, neither was calling this fast car “The Slug.”  Befitting a world record beating vehicle, the Sunbeam had yet another nickname, this one being “Mystery,” though nobody knows why… 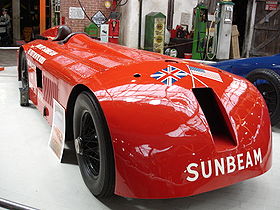 Sunbeam Motor Car Company Limited was headquartered in Wolverhampton, England, and the car was the only unit of the design, specifically made for the world record run.  Although relatively sleek and aerodynamic looking for the time, the car was quite large, stretching 25 feet long and 8 feet wide, while weighing a whopping 4 tons!  Designed by Captain Jack Irving and Louis Coatalen for Coatalen’s Automobiles Talbot-Darracq team, limited money kept new development to a minimum, hence the use of used engines.  The tires (again, for you Anglophiles, “tyres”) were custom made to withstand a speed of at least 200 mph for 3 and a half minutes.

The driver for the record run was Sir Henry O’Neal de Hane Segrave (1896-1930), a veteran of high speed land and water record attempts. In his career Segrave set the land speed record 3 times and the water speed record once.  His death in 1930 came in an accident at the end of a world record water speed run.  The Segrave Trophy was commissioned by his widow in his honor to be presented to a British person annually that demonstrates “Outstanding Skill, Courage and Initiative on Land, Water and in the Air.”  In acknowledgment of those people that make great feats of speed possible by drivers and pilots, the Segrave Medal is awarded to those worthy individuals that most helped the winner of the Segrave Trophy achieve their accomplishments.  Not to ignore non-British nationals in the field of setting speed records, the Segrave Certificate of Achievement is also awarded to “foreigners.”

Getting back to the car, the engines were not just cranked up with the usual hand crank or the electric self-starter.  The rear engine was started using compressed air to turn it over, and once it started, the rear engine was used to start the front engine via a friction clutch.  Once they were both running, the engines were synchronized and then locked together with a “dog clutch.”  The Sunbeam Motor Company made automobiles from 1901 until it went out of business in 1967, although the brand name lived on until 1976.  Chrysler and its European affiliate also used the Sunbeam name for a while (1977-1982), but as a model name rather than a brand.  The company also manufactured aircraft and watercraft engines, commercial vehicles, motorcycles and both sports cars and sedans, as well as race cars.

Question for students (and subscribers): Do you know what the current Land Speed Record is?  Have you ever been to Daytona Beach, Florida?  What is the fastest car you have ever owned or driven?  Please let us know in the comments section below this article. 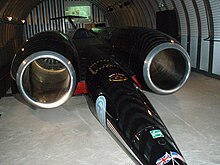 The featured image in this article, a photograph of Marcel Divo in the Sunbeam 1 000HP ‘Mystery Z’ d’Henry Segrave (RM) at an exhibition in Montlhéry (1927), is in the public domain because its copyright has expired and its author is anonymous.  This applies to the European Union and those countries with a copyright term of 70 years after the work was made available to the public and the author never disclosed their identity.  This work is in the public domain in France for one of the following reasons: