On March 27, 1794, the United States Congress authorized the building and purchase of a fleet of 6 frigates, ships that would become the core of what became a standing US Navy, a naval fighting force that would eventually rule the oceans for many decades, ruling the waves from World War II to the present.

After fighting and winning the American Revolutionary War against the greatest military power in the world, Great Britain, the US fought valiantly at sea with a tiny Navy against the greatest naval power in the world, albeit with the help of the French Navy. After the Revolution, the US sold off its last warship as national finances were strained to say the least. For a decade the US tried to exist without the benefit of an operational Navy, but events in the Mediterranean and elsewhere proved that American shipping was at the mercy (or lack of mercy) of pirates and the navies of other countries if not defended by American warships. Thus, Congress authorized the 6 frigates.

The frigates ordered for the Navy would be strong fighting ships, capable of defeating the frigates of other countries, and fast enough to out run the heavier ships of the line of the great naval powers. (Ships of the line were the “battleships” of their day, while our new frigates would be akin to battlecruisers of the World War II era.) The 3 larger frigates (USS Constitution, USS President, and USS United States) a length of 204 feet and a beam of 43 feet 6 inches, these new ships displaced 2200 tons and carried a complement of 450 officers and men, of which 55 would be Marines and 30 would be ship’s boys. These 3 ships would carry 44 guns. The other 3 ships (USS Congress, USS Constellation, USS Chesapeake) were somewhat smaller, carrying a crew of about 340 and mounting 38 guns apiece. 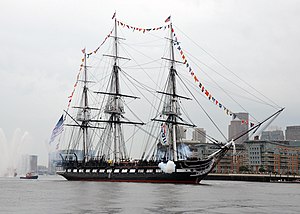 The US Navy went on to successfully protect American shipping overseas and fought an uphill though valiant battle during the War of 1812. During the US Civil War the US Navy and Confederate States Navy fought the first battle of ironclad warships in history. The US Navy grew enormously during the Civil War to conduct a largely successful blockade of the Confederacy. The next big test of the US Navy came in the Spanish American War (1898) in which US naval gunnery overwhelmed Spanish warships. By the time Theodore Roosevelt was President he sent The Great White Fleet on a trip around the world to show off US naval power, putting the world on notice that the US Navy would be a major player on the world’s oceans.

Connecticut leads the way for the Great White Fleet in 1907.

World War I found the US Navy fighting a new kind of war against the German submarine threat making their new, modern battleships almost irrelevant. Between the wars, the US Navy wisely embraced the idea of Naval aviation and developed our first aircraft carriers. By the time World War II started the US Navy had a formidable fleet of 17 battleships, 43 cruisers, 171 destroyers, 114 submarines and especially a handful (7) of extremely valuable aircraft carriers equipped with rugged, modern aircraft. During World War II the US Navy expanded in an unprecedented growth spurt that saw its numbers of warships grow to nearly 6800 ships!

Since World War II the importance of battleships diminished and the aircraft carrier became the capital ship of the US Navy, of which it currently boasts 11 of the most powerful such ships ever built, far more capable than the few carriers fielded by other navies. Each of those carriers has a strong fleet of cruisers, destroyers, support ships and protective submarines in its battle group. Another major component of the strategic power of the US Navy is the ballistic missile and guided missile submarine force, 18 nuclear powered super stealthy ships that can launch nuclear or non-nuclear missiles at targets virtually anywhere in the world. The current submarine force is 100% nuclear powered and numbers 70 “boats.” Today the US Navy has only 272 ships, and even that number includes some ships not in service but in carefully preserved condition ready for service at a moment’s notice. In spite of the seemingly small numbers, the US Fleet easily outclasses any other navy in the world, by a large margin.

Today with the threat of piracy still a factor, especially in the Indian Ocean and around the island areas of the Pacific, the US Navy protects American and other civilian shipping from predation. With a rapidly building Chinese navy and naval basing on artificially created islands, a strong US Navy is mandatory to avoid having our national will denied in the Pacific. Russian aggression in the Ukraine, Syria, and with their airplanes and ships at sea also require a strong US naval presence to counter the constant testing of US and Western resolve. The mere presence of a US aircraft carrier battle group near a potential enemy’s shore is mighty intimidating. The US Navy is also vital for the transportation and protection of troopships in the event ground forces are needed on foreign shores. The latest US Navy ships are exploring the far reaches of technology and stealth capability to more effectively complete their mission, but such technology is not cheap.

What do you think about military spending, especially insofar as building and maintaining cutting edge technology ships and crews? Do you have any interesting tales of US Navy adventures? Please share your opinions and experiences.