On March 22, 1960, Scientists Arthur Schawlow and Charles Townes of Bell Labs in New Jersey patented their invention of the LASER, a device that concentrates and focuses visible light that today we find useful in a myriad of applications. Without the laser, we would not have CD’s and DVD’s, BluRay’s and the like.

The theoretical possibility of creating a laser or laser like device was proposed by Albert Einstein in 1917 and other theoretical scientific work contributing to the development of the laser (and its predecessor, the maser) continued throughout the 20th Century. In fact, while Schawlow and Townes were completing their work, a graduate student named Gordon Gould was doing similar work and had communicated with the Bell Labs scientists in the late 1950’s. Gould is credited with coming up with the acronym, LASER, meaning “light amplification by stimulated emission of radiation” used in his 1959 published scholarly paper. Gould had pioneered the idea of using an open resonator in constructing a laser, an important piece of the puzzle that all lasers rely on today. Previous work had concentrated on the maser, a concentration of radiation of microwaves, while the laser research was a divergence into making light waves coherent. Gould’s work with “excited” thallium also helped lay the foundation of inventing the laser, and Gould attempted to patent his laser in 1959, at more or less the same time as Schawlow and Townes, but the Patent Office sided with Schawlow and Townes, leaving Gould to file an unsuccessful lawsuit over patent rights.

Schawlow and Townes had progressed from working with the maser idea of x-ray and microwave stimulation and amplification to attempting to develop an infrared “optical maser” before they settled on developing the optical laser as we know it. An indication of the parallel work being done on developing lasers by scientists around the world at the time was the first use of an operating laser by Theodore Maiman of Hughes Research Laboratories in California on May 16, 1960, before even Schawlow and Townes had actually achieved a working model. The first lasers required a ruby to focus the light, giving the laser its characteristic red visible light, but work pioneering the use of gas lasers was being accomplished within months of the first operational ruby laser. At first lasers were capable of only pulsed operation, but continuous laser light production followed closely.

At first lasers were a scientific demonstration of the possible and uses for the focused coherent light came soon afterward. In the feature film, Goldfinger (1964) super spy James Bond is threatened with a large laser ominously cutting through the solid gold table he is tied down on, precariously approaching the area between Bond’s (Sean Connery) legs, the first time much of the public at large had seen a depiction of a working laser. Laser beams capable of cutting through metal seemed like the realization of the “Death Ray” of science fiction, but the enormous size and energy requirements of such a powerful laser device made such ideas impractical. Later, as engineering smaller and more powerful lasers became possible, lasers were considered as weapons, either to blind enemy soldiers and pilots or to actually shoot down missiles and planes. US Air Force cargo jets were outfitted with laser weapons in the nose to test their usefulness as a combat device. Later military applications using lasers as range finders and weapons guidance devices became widespread. Lasers are commonly attached to firearms (pistols and rifles) to aid in quickly aiming the guns. (The US and other militaries are fielding all sorts of laser related weapons but using lasers to blind people is prohibited.) 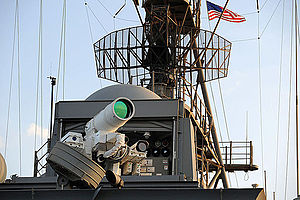 Civilian applications for lasers covers an incredibly wide range of useful tasks, including but not limited to:

-Scientific applications including geography, seismology, atmospheric and weather study, astronomy, spectroscopy, holographic devices, studying various optical phenomena, heat treatment, photochemistry, and in space travel.
-Entertainment applications such as CD, DVD and BluRay discs., lighting displays, putting subtitles on moving pictures, laser tag games, the laser harp (musical instrument) and projecting movies.
-Laser pointers are useful for lecturers and teachers, or just for teasing your cat. Laser pointers can also be used to harass unwanted Canada Geese if you want to chase them away. Just DO NOT point them at any person’s or animal’s eyes, especially a person flying an airplane or driving a car. Even airports use lasers to chase away birds from the flight path of airplanes.
-Medical applications allow for precision laser surgery giving results never before achievable, with minimal scarring, bleeding and collateral damage. Excising tattoos and bodily imperfections is possible with lasers. Lasers can even be used for treatment of dental cavities, whitening teeth, and oral surgery, and they are useful for precision removal of cancerous tumors.
-Industrial uses are incredibly numerous themselves, including all sorts of cutting and etching/engraving, measuring, guidance, heat treating, welding, drilling, data storage and retrieval in computers. The modern computer mouse works with a laser. Surveyors and construction workers routinely use lasers to give precise measurements and perfectly straight lines.
-Police use LIDAR (the words being a combination of laser and radar but the devices just laser) to check the speed of vehicles with a high degree of precision. Such devices have military and industrial applications as well.

As technology progresses, we will certainly find even more uses for laser devices. Question for students (and subscribers): What are your favorite uses of lasers?  Please let us know in the comments section below this article.