On March 1, 1986, the Prime Minister of Sweden was declared dead, having been shot by an assassin minutes earlier on February 28, 1986.  He had been walking with his wife down a main street in the Swedish capital of Stockholm when a gunman approached them and fired one shot at each of them.  The Prime Minister, Olof Palme, was struck and killed by the assassin’s bullet, while his wife was also hit by a single shot, but not killed.  Palme’s wife, Lisbet Palme, later identified Christer Pettersson, a Swede previously convicted of manslaughter, as the assassin.

So, case solved, right?  Wrong!  Petterson was convicted of the murder in and the attempted murder at trial in 1988, but upon appeal the conviction was overturned, Petterson was declared by the appeals court “acquitted.”  He died in 2004, officially not the assassin.  Despite Petterson’s acquittal, no other suspects were ever named or tried for the crime and the case remains unsolved.  Seldom is a major government figure assassinated and no suspect is convicted of the crime, yet this time was the exception. 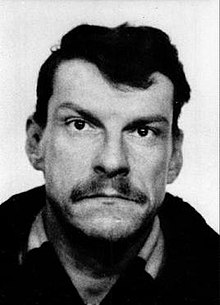 When the Palmes were shot on Sveavägen Street in Stockholm after leaving the cinema at almost midnight, they had no bodyguards or security officers in attendance.  Apparently, Sweden was thought to be safe enough to not have to guard the leader of the government, at least by Olof Palme who had tried to live a simple and normal life as Prime Minister without the trappings of office.  Palme had been shot in the back and was quickly assisted by a taxi driver who radioed for help and a pair of passing female motorists.  A passing ambulance was stopped and the stricken Palmes were loaded up and taken to the hospital.  Arriving at the hospital minutes later, Olof was declared dead on arrival.  Lisbet was only slightly wounded and later identified Petterson as the attacker.

Citizens later reported observing the Palmes walking to the metro station, noticing that the pair was without escort.  The Palmes met their son and his girlfriend at the theater, and after the film the 2 couples went their separate ways.  As the elder Palmes walked back to the metro station, the assassin approached from behind, fired 2 shots, and took off running.  Initially, there were no suspects and no physical evidence left at the scene other than the bullets that had been fired.  The assassin had used a .357 Magnum revolver, which of course does not eject spent shell casings automatically, so no shells were found at the scene.  The murder ammunition was later found to be Winchester brand 158 grain “metal piercing” ammunition.  The revolver was determined to be a Smith & Wesson product.  That information about the murder weapon provided the impetus for the investigation to determine the owners of any such revolver. 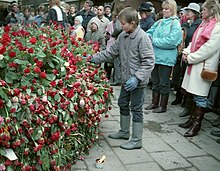 Mourners at the assassination site.  Photograph by Holger.Ellgaard.

Swedish police conducted a tedious examination of several hundred Smith & Wesson revolvers to determine which model had fired the shots, and eventually zeroed in on 10 such hand guns that had been reported stolen.  Of those 10 suspect weapons, 9 were accounted for and the remaining revolver was found to have been stolen in 1977, eventually ending up in the possession of a convicted drug dealer, Sigvard “Sigge” Cedergren, who later claimed while on his deathbed that he had given the gun to Christer Pettersson only 2 months prior to the murder.  Seems pretty convincing, eh?  Not so fast!

Another Smith & Wesson revolver, this 1 stolen in 1983, was found to have been used in a non-related robbery.  That particular pistol was stolen along with 91 of the same type of cartridges used in the Palme shooting.  Scientific analysis of the bullets found the murder bullets and the stolen bullets to be identical in composition, meaning they had been manufactured in the same lot, but not necessarily came from the same box purchased by a consumer.  This revolver had been recovered from the bottom of a local lake, its location given to police by an anonymous tipster.  Frustrated investigators found it impossible to confirm if that particular revolver fired the fatal shot at Palme due to the rusty condition of the gun.

Memorial plaque at the place of the assassination, reading: “Here, Sweden’s Prime Minister Olof Palme was murdered, on 28 February 1986.”  Photograph by Stern.

The shooting had been witnessed by over 2 dozen people, of which at least 25 gave accounts of what they had seen.  The gunman was described as 6 feet to 6 feet 2 inches tall and wearing a dark coat.  Some said he walked with a limp or at least a “clumsy” gait.  Ages ascribed to the offender ranged from 30 to 50 years old.  Other witnesses described the killer as smooth moving, and the accounts of the limping or stumbling assassin only became “remembered” after Petterson had been arrested.  No description of the killer’s face was given by any credible witness.

Once Petterson had been acquitted of the crime, the other suspects in the case became the subject of conspiracy theories about the assassination.  Petterson’s acquittal was based on the lack of a murder weapon, no known motive, and irregularities in the police lineup in which Lisbet Palme had picked out Petterson.  Over the years since the acquittal, other criminals have claimed to “know” that Petterson was indeed guilty, but without providing any usable evidence.  Petterson even “confessed” to the crime, but not in a manner consistent with bringing fresh charges.  One theory presented claims that Petterson had actually intended to kill the very same drug dealer that had loaned Petterson the revolver, mistaking Palme for the criminal in bizarre case of mistaken identity.  Conspiracy theorists later claimed, without proof, that many police had been monitoring the same area in which Palme was murdered and had mysteriously disappeared shortly before the shooting. 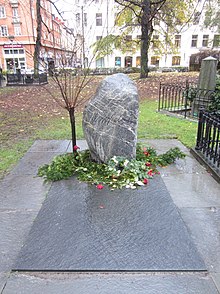 Other conspiracy theories about the Palme assassination include blaming Yugoslavian secret service, Swedish extremists (including the brief arrest of such an individual known to oppose Palme and his policies), South Africans angered over Palme’s disfavor of apartheid policies in South Africa, a Swedish police conspiracy, a plot by dealers of Swedish weapons dealing with India,  a Chilean fascist extremist, Kurds living in Sweden involved in the PKK (Kurdistan Workers’ Party), Freemasons from Italy, the American CIA, a Swedish insurance company, and perhaps the US in retaliation for Palme’s disapproval of the Iran-Contra scandal.

The investigative report, still ongoing, has already generated over 700,000 pages!  This incredible volume of information may be the most extensive criminal investigation in world history.  A reward for information leading to the solving of the case stands at about $7 million (US dollars). 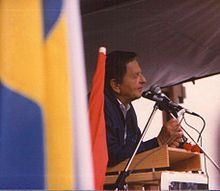 Question for students (and subscribers): What other unsolved assassination can you think of?  Do you believe any of the conspiracy theories?  Do you believe Lee Harvey Oswald is the only assassin involved in the President John F. Kennedy assassination?  Please let us know in the comments section below this article.

Freeman, Ruth. Death of a Statesman: Solution to the Murder of Olof Palme. Robert Hale Ltd, 1989.

Neroth, Pelle. The Life and Death of Olof Palme: A biography. Independently published, 2017.

The featured image in this article, a photograph by SCANPIX SWEDEN from gp.se of Olof Palme giving a speech on a truck, where is unclear (the Almedalen park in Visby has been suggested, but that is highly unlikely, as the background does not match (there are no pine trees in Almedalen, and the current park is from the 1870s), is in the public domain in Sweden because one of the following applies: