On June 5, 1829, the British ship, HMS Pickle, a 5 gun schooner, captured an armed slave ship, the Voladora, off the coast of Cuba.  This vessel was not the first British ship named “Pickle,” and in fact, it was the third British Navy ship with that name.  Indeed, there have been 8 Royal Navy ships with that goofy name!  With all the cool and bad ass sounding names you could give a warship, why settle for some goofy name?  Well, there are a bunch of goofy named warships, and here we list 10 of them.  (Our family boat was named “Bass-ette Hound” a play on chasing Bass and the fact that we had 2 Basset Hounds.)

As noted above, 8 Royal Navy ships have borne this name, although there is currently no ship saddled with this moniker.  The first HMS Pickle was at the Battle of Trafalgar and was chosen for her speed to rush back to London and inform the Admiralty of the great victory, so the name does come with some credentials.  I could find no reference to why the ships got this name. 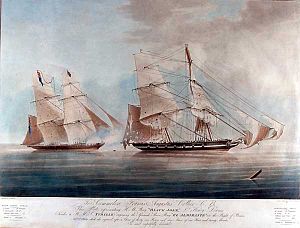 After the captain of the HMS Pickle (the one from Trafalgar fame) grounded his ship on a reef and destroyed it, he was given command of yet another ship bearing an odd name, the Black Joke.  I mean, come on! As if we do not have enough racial tension, they have name a ship “black joke?”  Why would they do that?  Was there already an “Italian Joke,’ or a “Polack Joke?”  “Jewish Joke?”  Did the crew look around before mentioning the name?  What gives?  To top it off, there have been either 2 or 3 (2 of them may actually be the same ship) HMS Black Joke’s.  At least there haven’t been any ships with this name since 1832.  By the way, the last one to bear the name was a renamed captured slave ship that was used to combat the slave trade, so perhaps there was some sort of inside joke.

The US Navy got the bright idea to name submarines after fish, and with the uber successful Gato class of subs (77 built) of World War II fame they must have started running out of cool sounding fish names and started giving the hapless ships dorky fish names, that is, named after mundane non-exciting non-dangerous fish.  The wahoo is a sleek and toothy predatory fish, but the name itself sounds goofy, like, why not name the ship “Yippee!” or “Hooray?”  At least it wasn’t “Yahoo.”  Some of the other poorly chosen fish (or other oceanic animal) names for US Navy submarines include USS Intelligent Whale (better than Stupid Whale),USS Drum, USS Grampus, USS Carp, USS Grouper, USS Bonefish, USS Bluegill, USS Flasher, USS Hoe, USS Croaker, USS Puffer, USS Chubb, USS Dugong, and the ever scary sounding USS Pogy.  Perhaps you will find other US fish named subs even goofier than these.

Another unfortunately named submarine, this time of the Royal Navy.  Seriously, why name a sub after an over grown rat?  A marsupial at that!  Was “Woodchuck” already taken?

This coal hulk was originally named SS Rufus King, a World War II era Liberty ship that was broken in two when it ran aground off Australia during World War II, with only the front half saved for salvage.  The “ship” was then used as a floating machine shop, later converted to a coal hulk.  Owner of the Half Rufus was the US Army.

Not surprising this ship is the only US Navy vessel ever named “Asphalt!”  She was, ironically enough, a concrete barge that was destroyed by running aground during a storm off Saipan in 1944. This oddly named ship is a RORO, or “roll on, roll off” cargo vessel built in 1979.  It is registered in Panama, but given the English name, I would think the owners are from an Anglophone country.  We had no idea why they changed the name from Aires, and then found the owners were Ducky Sovereign Shipping.  (This ship is our only ship listed that did not serve with the military.

Yet another submarine!  The name means “body of Christ” which offended thousands (or millions, who knows? ) of  Americans, mostly Christians.  Due to the intense protest, the US Navy changed the name of the ship to the USS City of Corpus Christi, honoring the city in Texas by that name.

Come on already!  There are lots of cool deadly or amazing animals to name a ship after and they picked “Porcupine?”  This poorly named ship was an oiler of the Armadillo Class.  Honorary Mention:  USS Armadillo!

No less than 3 US Navy minesweepers have had this name sure to draw taunts toward the crew from other sailors from better named ships.  Some names just invite jokes and teasing, and with all the nifty birds of prey or exceptional beauty or flying capabilities, or even of oceanic nature, why pick lame names such as this?  Other crummy bird names US ships have been saddled with include USS Quail, USS Hornbill, USS Crow, and USS Bunting.  The list could go on and on.  By the way, the USS Swallow was built in Cleveland, Ohio in 1944.

Question for students (and subscribers): What goofy named ships would you add to the list?  Please let us know in the comments section below this article.