Wednesday, June 3
Trending
You are at:Home»Society»Crime»June 21, 1919: Bloody Saturday in Winnipeg

On June 21, 1919, the reactionary establishment of the city of Winnipeg, the province of Manitoba, and the federal government of Canada overreacted to a peaceful labor strike and attacked striking workers (largely war veterans) with the Royal Northwest Mounted Police.

While World War I raged,  many Canadian young men left their families and jobs and went to fight in the war.  Upon their return, they found businesses had profited immensely from the war, and a flood of immigrants had taken their jobs.  Compounding the problem was the “Spanish” Influenza epidemic that made huge portions of the population sick. 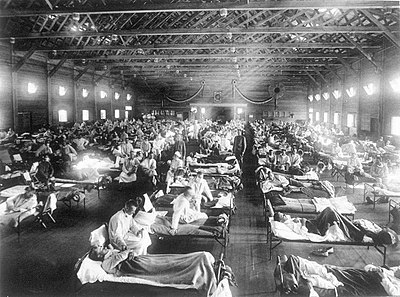 Soldiers from Fort Riley, Kansas, ill with Spanish influenza at a hospital ward at Camp Funston

In an effort to organize workers into a labor union to include all sorts of trades, the One Big Union was formed with a labor committee of 8 men.  A general strike was declared in Winnipeg, resulting in a huge percentage of workers walking off the job, even police and firemen.  (Firemen soon returned to work with the blessing of the labor committee.)  The police were given an ultimatum to return to work and sign a pledge not to join any union.  Most of them stayed off work and were promptly fired, being replaced with untrained “constables.”

When about 25,000 of the striking workers peacefully demonstrated, the Mounties were sent in to attack in a cavalry charge, killing 2 workers and injuring many others.  Mass arrests were made, including some eastern European men accused of being Bolsheviks.  It seems the business and government people were afraid the union and strikers were revolutionaries in the model of the Russian Bolsheviks(communists) and presented a threat to the status quo if not the stability of the country.

These fears of revolution were unfounded, but that did not stop the rich and powerful from calling the protesters names such as “Bohunks” and “alien scum,” which was done in an effort to sway the other citizens against the labor force.  The 8 labor leaders were arrested, with 5 of them being convicted and jailed from 6 months to 2 years.  One was deported, and another had his deportation cancelled on appeal.  Even the publishers of the strikers newspaper were arrested for reporting on the events!

After the state initiated violence and arrests, the strikers (some of them) got a slightly reduced work week with no pay raise and lost pension benefits.  Workers taken back on the job were started over at bottom salary and seniority.  Obviously the violence and unsatisfactory outcome deepened the division between owner/management and workers.  With a fourth of the workforce being women, the local female population was fiercely on opposite sides as well, with strikers on one side and “scabs” willing to take their jobs on the other side. 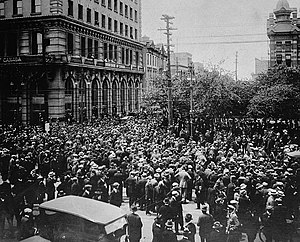 Somehow Canada and Winnipeg survived and workers rights are no longer cause for alarm.  In almost all countries where a labor movement has taken place workers have had a hard struggle to get protection under the law.  Question for students (and subscribers): What do you think about unions?  Feel free to share your opinions in the comments section below this article.