On June 1, 1918, the Battle of Belleau Wood began in France near the River Marne.  The United States Army 2nd and 3rd Divisions reinforced by a brigade of US Marines consisting of the 5th and 6th Marine Regiments (with smaller units of French and English soldiers) faced off against 5 German divisions determined to continue their advance into Belleau Wood.  This action produced real evidence that United States soldiers and Marines had the guts to fight on the biggest stage in the world.

The Germans were determined to advance as far as possible into Allied territory before American forces, including equipment, could be brought up to sufficient strength to effectively fight on the Western Front.  The German offensive had been going relatively well for Germans, with 50 extra divisions released from duty in the Eastern Front due to the Russian armistice.

Map of the final German offensives, 1918

When German attacks overran French positions, Marine reinforcements were deployed to plug the hole in Allied lines, which they did.  The Marine Brigade under the command of Army General James Harbord refused French orders to pull back to make new trenches, and held their ground against new German attacks.  Using only bayonets to dig in, the Marines made shallow depressions to lay in and fight off determined German attacks.  In the face of overwhelming force, the French commander again ordered a retreat, causing Marine Captain Lloyd Williams to retort, “Retreat?  Hell, we just got here!”  For the next few days, the Marines held against repeated attacks by superior German forces, finally going on the offensive on June 6th.

Despite murderous machine gun and artillery fire on Marines advancing across open fields, the bayonet wielding Devil Dogs successfully reached their objectives.  The Germans called Marines Devil Dogs due to their incredible tenacity in this and other WWI battles.

Gunnery Sergeant Ernest Janson (actually serving under the pseudonym, Charles Hoffman) earned both the Army and Navy Medal of Honor in this action, while Marine Gunner (warrant officer) Henry Hulbert (possibly the first ever Marine promoted to the rank of Gunner) earned the Distinguished Service Cross.

In another attack, legendary Marine hero Gunnery Sergeant Dan Daly uttered the immortal words, “Come on you sons of bitches, do you want to live forever?”  Daly won a Navy Cross in this battle to go with the 2 Medals of Honor he had won in Haiti and China.  (Daly also won the Distinguished Service Cross and the Croix de Guerre.)   Daly is famous for twice turning down commissioned officer status, saying he would rather be an outstanding sergeant than just another officer.

The Marines would continue to encounter murderous fire from the Germans during a total of 6 attacks on Belleau Wood before the US forces finally took the Wood on June 26th.  Fighting had often been hand to hand, clubbing with rifles, stabbing with bayonets, and literally fighting with their fists!  Marine battalion commander Major Maurice Shearer sent the terse message, “Woods now US Marine Corps entirely.”  Over 2500 Marines had died with another 1060 missing, and about 9000 Germans gave their lives in this bloody battle.

Incredulous and shocked German soldiers ground down by the incredible bravery and ferociousness of the US Marines called those Marines “Hollenhunde” (Hell hound) and “Teufelshunde” (Devil dogs).  In an official report, Germans called the Marines, “vigorous, self-confident, and remarkable marksmen.”  The French re-named Belleau Wood, Bois de la Brigade de Marine and awarded the 5th and 6th Marine Regiments the French Fourragere, a rope like award worn to this day over the left shoulder of Marines serving in those regiments.  General JJ Pershing, the top US Commander in Europe said, “The deadliest weapon in the world is a US Marine and his rifle.”  He was right! 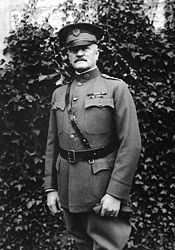 As a question for my students (and subscribers), did you know that two US Navy ships have been named in honor of the Battle of Belleau Wood?  They were the USS Belleau Wood (CVL-24), a World War II light aircraft carrier, and the USS Belleau Wood (LHA-3), an amphibious assault ship.  If you know of anything else that has been named for this battle, please let us know in the comments section below this article.

Catlin, Albertus W.  “With the Help of God and a Few Marines”: The Battles of Chateau Thierry and Belleau Wood.  Independently published, 2016.