Perhaps you are familiar with the German invasion of the Soviet Union in 1941, a plan the Germans called “Operation Barbarossa” in honor of one of their greatest kings. Like the Third Crusade, Operation Barbarossa was a major bad idea and largely was responsible for the downfall of the Third Reich. Along with the famous military operation, many other people (real and fictional) and things have been named “Barbarossa,” which means “red beard” in Italian. There have been songs and record albums bearing this regal name, as well as literary and movie characters, movies, games, and even cities and ships, both real and fictional.

Born in 1122, in the Swabia region of what is now Germany, Friedrich was first the “Herzog von Schwaben” (Duke of Swabia) before he joined his uncle, King Conrad III of Germany on the Second Crusade to the Holy Land. Returning to Europe, Conrad died in 1152, and according to Friedrich, named Friedrich as the heir to his throne, even over the normal succession of the King’s own son, who was only 6 years old at the time of Conrad’s death. Instead, again according to Friedrich, Conrad allegedly named his own son as heir to the Dukedom of Swabia.

The kingdom that Friedrich was crowned to rule was not a unified country that we think of as Germany today. Instead it was a polyglot of 1600 minor principalities and the like, a situation Friedrich tried to remedy by uniting Germany. The throne he inherited was a largely ceremonial office with little power and wealth, and Friedrich was dead set on changing that situation. In his quest for power Fred (we can call him Fred, ok?) tried to ditch his wife and obtain a bride from the court of the Byzantine Empire, but was unsuccessful in that pursuit. Friedrich courted the Pope with promises of fealty in order to gain Papal blessing of his crown, and this time the effort was a success. King Fred turned to Italy as a rich source of power and wealth and proceeded to conduct 6 invasions of that land that was by this time largely under Norman control. By 1155, Friedrich had moved all the way to Rome where he was received by the Pope and after negotiations was given a Papal Coronation as Holy Roman Emperor. 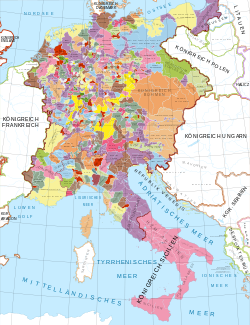 The Hohenstaufen-ruled Holy Roman Empire and Kingdom of Sicily. Imperial and directly held Hohenstaufen lands in the Empire are shown in bright yellow.

The next 3 decades were spent pacifying the various states, cities and principalities in German and continued attempts at hegemony in Italy. Italy during this period was wracked by fighting between the Germans, the Normans (mainly in the South) and Italians, with insurrections in the major cities as well as land and power grabs by outsiders. In 1159 a crisis in the Catholic Church developed when 2 different Popes were named, each with their own supporters. In 1163, Friedrich failed in his attempt to take over Sicily, although he later managed to marry off his son to the heiress of the Kingdom of Sicily in 1186, so in some way Friedrich did achieve his goal of controlling Sicily. By 1183, the Peace of Constance treaty including Friedrich and the Church finally gave some stability to the Italian front, though in Italy and Germany both the countries were never truly united with any sort of modern type of nationalism. During his reign, Germans did muster a sort of nationalism in that lands to the East peopled by the Slavs became an area desired for German settlement, a precursor to the situation in 1939-1945. In 1178, Friedrich was crowned King of Burgundy (France) which further strengthened his hold on the reins of power in Europe, but the constant struggle just to maintain the status quo was clearly wearing out and frustration the King and Emperor.

Friedrich “took up the cross” in 1189 after promising to do so to Pope Gregory VIII in 1188 as part of the pas de duex between the 2 leaders. This Third Crusade (1189-1192) was a massive European effort to stabilize the European (mainly Frankish) hold on the Holy Land in the face of the Islamic forces of Saladin. King Philip Augustus of France and King Richard the Lionheart of England likewise mobilized great armies to grab their own piece of the action (and presumably spoils of victory). The Third Crusade would be the last great event of the life of Friedrich Barbarossa, as he fell off his horse while crossing a stream in Anatolia (today Turkey and Armenia) and either drowned or died of a heart attack when he landed in the cold water. The water, of the River Saleph, was said to be only about waist deep, but weighed down by heavy armor Friedrich may not have been able to rise in time to survive. The Third Crusade did not go well for the Europeans, though of course the leaders pretended to have achieved success, setting a precedent for politicians to live up to even today. The Islamic leader, Saladin, a Kurd, gained great fame and notoriety from his success against the Crusaders. 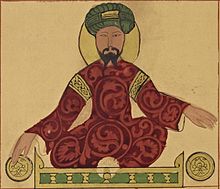 A possible portrait of Saladin, found in a work by Ismail al-Jazari, circa 1185

The untimely death of Barbarossa furthered the chaos in the German army in the Middle East, and though his son tried to take the body of the King to Jerusalem for burial, the attempt to preserve the body in vinegar failed. (We wonder what exactly they mean when writers report “failed” …) You may or may not be shocked to know that the bones of Barbarossa were interred at Tyre, his flesh at Antioch, and his heart and other organs in Tarsus! (Medieval ways may seem mysterious to us modern types!) The failure of the Third Crusade resulted in a Muslim take over of Jerusalem.

Barbarossa fathered 11 children with his second wife and became a sort of legendary figure after his death. In life he was charismatic and certainly managed to impress people, but his legend is almost assuredly far in excess of the reality of the man. All sorts of legends and myths surround the accounts of Barbarossa, and apparently by 1941 the legend of Barbarossa was entrenched in the German psyche enough to lend his name to what was planned to be the greatest invasion in history. Alas, even a name as illustrious as Barbarossa cannot make up for being outnumbered by men and tanks.

A golden bust of Frederick I, given to his godfather Count Otto of Cappenberg in 1171. It was used as a reliquary in Cappenberg Abbey and is said in the deed of the gift to have been made “in the likeness of the emperor”.

Question for students (and subscribers): Would it have been better for history had Barbarossa survived to continue leading the Third Crusade?  Please let us know in the comments section below this article.

The featured image in this article, a photograph by Numisantica of a penny or denier with Emperor Frederick I Barbarossa, struck in Nijmegen, is licensed under the Creative Commons Attribution-Share Alike 3.0 Unported license.