Saturday, June 6
Trending
You are at:Home»January»January 4»January 4, 2007: First Woman Speaker of the U.S. House! Are Women Also Fit to be President of the U.S.?

We previously ran an article titled “Are Women Fit Enough for All Jobs?” and today we discuss the same question, but narrowed down to the highest offices in our land.  Having served as Speaker for 2 previous terms of 2 years each (Representatives are elected every 2 years, usually holding an election for Speaker of the House on the first day of the new Congress), Pelosi has enough political credibility to have earned a second shot at being so close to the Presidency after 8 years out of the job that in her case we would have to say a firm, “Yes.”  Additionally, in 2016 the Democratic Party nominated Hillary Clinton, former First Lady of the United States, former US Senator (from New York), and former Secretary of State of the United States.  Clinton also boasts a Juris Doctor degree from Yale, one of the nation’s most prestigious law schools.  Although unsuccessful in her bid for the Presidency, Clinton garnered a plurality of the popular votes for President by an impressive margin of about 3 million votes more than the winner, Donald Trump, who triumphed in the Electoral College while failing to win the popular vote.  Clinton got more votes than any presidential candidate in US history other than Barack Obama, so apparently many millions of Americans believe that particular woman is qualified to be President of the United States.

Hillary Clinton at an event in Phoenix, Arizona in March 2016.  Photograph by Gage Skidmore.

In 2008, the Republican Party nominated Sarah Palin, the then Governor of Alaska, as their nominee for Vice President on a ticket with John McCain, a ticket that lost the election but did receive millions of votes, again indicating that millions of Americans believed that particular female candidate was also fit to be a single heartbeat away from being President of the United States.  Likewise, in 1984, the Democratic Party nominated Geraldine Anne “Gerry” Ferraro to run for Vice President on a ticket with former Vice President Walter Mondale against incumbent President Ronald Reagan.  Ferraro, holder of a Juris Doctor degree from prestigious Fordham University, and Mondale lost the election, but again, millions of Americans voted for the Democratic ticket, implying approval of Ferraro as a potential Vice President.

In addition to the support women have in recent decades received for potentially becoming President or Vice President (Senator Elizabeth Warren is one of the current front runners for the Democratic nomination for President in 2020), it must be pointed out that 4 women have served as Associate Justice of the Supreme Court of the United States, 3 of them currently serving, all having served with distinction.  Lately, Justice Ruth Bader Ginsburg has been in the news for her brushes with medical problems, especially insofar as her incredible ability to bounce back from those problems and remain a sharp legal wit and displaying remarkable energy for her age (85 years old).

A poster depicting Ginsburg as “the Notorious R.B.G.” in the likeness of American rapper The Notorious B.I.G., 2018.  Photograph by Montanasuffragettes.

Women have also made tremendous strides in the world of corporate leadership, as evidenced by our article, “General Motors Placed in a Woman’s Hands for Proper Management.”  The appointment of Mary Barra to head GM in December of 2013 was a groundbreaking moment in the automobile industry, as she became the first woman to take the helm of a major automobile producer.  While the number of women executives has been steadily increasing over the years, the high water mark for females as corporate executives was 2017 (32 female chief executives of major American companies) while 2018 has started as an anomaly with a reduction in that number to 24 female chief executives of major American companies.  (We suspect this is a normal blip in the ups and downs of corporate America.)  If monster companies rely on a woman to run the show, it is reasonable to assume a woman is quite capable of running the United States, especially in light of the performance of other female heads of state in recent decades, such as Margaret Thatcher (UK), Indira Gandhi (India), Angela Merkel (Germany), and Benazir Bhutto of Pakistan, the first female to serve as leader of a Muslim majority nation.

Another indication of the fitness of women to handle the mental demands of being President of the United States is the fact that the November 2018 announcement of the 2019 class of Rhodes Scholars counts 21 women among the 32 scholars named, a healthy majority!  Yesterday an all-time record number of women have been sworn in as US Representatives to the House of Representatives of the US Congress, 102 to be precise, easily eclipsing the previous record of 84 female Representatives to Congress.  The US Senate also has a new record number of female Senators, now numbering 25, a slightly higher percentage of females than the House.  The United States military counts 18% of their enlisted personnel as females, while 16% of the officer corps are women.  Additionally, as of 2013 there were 69 women serving as American generals and admirals (of the 965 officers of flag rank).  Certainly, these women flag officers are capable of fulfilling the duties of Commander in Chief.

BGEN Anna Mae Hays, US Army, was the first woman in the U.S. Armed Forces to be promoted to a General Officer rank; in 1970, she was promoted to the rank of Brigadier General.

In the face of the above evidence, we must conclude that, yes, women are fit to be President of the United States.

Question for students (and subscribers): Do you agree with our assessment of women as viable Presidential candidates?  If not, why not?  What current woman would you think could make a good President?  What prominent women that may become Presidential candidates do you believe are not ready for the big job?  Please let us know in the comments section below this article. 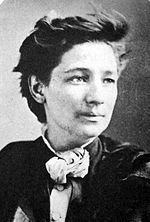 In 1872, Victoria Woodhull became the first lady presidential candidate.  Her candidacy preceded suffrage for women in the U.S.  Photograph by Matthew Brady.

The featured image in this article, DoD photo by U.S. Air Force Staff Sgt. Marianique Santos of Donald Trump with Nancy Pelosi during the 58th Presidential Inauguration in Washington, D.C., Jan. 20, 2017 from https://www.dvidshub.net/image/3114504/obama-hands-over-presidency-trump-58th-presidential-inauguration, is a work of a U.S. military or Department of Defense employee, taken or made as part of that person’s official duties. As a work of the U.S. federal government, the image is in the public domain in the United States.  More than 5,000 military members from across all branches of the armed forces of the United States, including reserve and National Guard components, provided ceremonial support and Defense Support of Civil Authorities during the inaugural period.