By 1944, World War II in the Pacific Theater had been raging for several years.  While the European War is traditionally dated to have begun in 1939, the Pacific Theater arguably began two years earlier with Japan’s invasion of China.  Thus, Japan had been fighting against myriad enemies for nearly seven years by the autumn of 1944.

During those seven years, Japan had rapidly established an impressive colonial empire that at its height seemed to even threaten Australia.  Nevertheless, with America’s entry into the war following Japan’s sneak attack on Pearl Harbor in late 1941, the situation for Japan would eventually become increasingly desperate as the island nation attempted to fight against too many opponents simultaneously.

Supporting the American forces in the key battles of the Coral Sea (May 1942) and at Guadalcanal (August 1942 to February 1943) was Australia’s heavy cruiser HMAS Australia.  With Americans and Australians having helped halt Japan’s offensive operations and now having begun the arduous task of retaking the territory previously conquered by Japan, Japan’s military turned to desperation tactics.

To that end, Japan hearkened back to one of its greatest national accomplishments achieved centuries before World War II when they, with the assistance of “divine wind” (which is what kamikaze means in English), successfully prevented the Mongols from adding Japan to their massive empire.  Now, in the mid-twentieth century, Japan appealed to the memory of the brave men who resisted the Mongols in 1274 and 1281 and their “divine” aid.  Japanese pilots would be asked to expend their own lives in the service of the Emperor and of Japan in suicide attacks against American and Allied ships and airplanes. 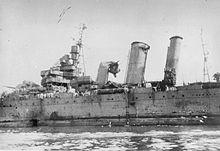 When the Japanese plane struck the HMAS Australia it did significant damage, killing thirty on board, including the ship’s captain, while wounding double that number.  Yet, even this incident may have been the initiative of the Japanese pilot rather than an officially ordered attack.  Regardless, the relatively successful assault was only the beginning and demonstrated just how willing Japanese were to sacrifice themselves in defense of what they believed a worthy cause.  As the war in the Pacific wound its way to its inevitable conclusion, relentlessly tightening the noose around the neck of Japan, more and more Japanese fighting men would be asked to give their lives in suicide attacks that became more frequent and of greater magnitude as the end approached, notably at the Battle of Okinawa (April to June of 1945).

Japanese soldiers, sailors and airmen were fiercely loyal to the Emperor and to Japan, willing to not only risk their lives, but to purposely give their lives in attacks by airplane, manned torpedo, speedboats laden with explosives, or by running up to tanks with explosives in their hands.  Their courage and devotion made them fearsome opponents for the Allied military that faced them, but in the end, their efforts and sacrifice was in vain.  Still, Kamikaze attacks managed to sink around 57 Allied ships and damage another 368, and in the process killing about 4800 Allied sailors and wounding a similar number.   Although it took 2800 Kamikaze sorties to inflict such damage, it can be argued that conventional attacks might have scored even less effective damage and lost just as many Japanese planes and men, another subject for debate.

Question for students (and subscribers): Would you be willing to spend your own life in a suicide attack for your country?  Let us know in the comments section below this article.

For further information, please read this article.  For questions of whether or not this incident really deserves recognition as the first kamikaze attack, please also examine this article.  We would be interested in reading in your comments whether or not you agree that the events of October 21, 1944 were in fact World War II’s first instance of a kamikaze assault on an Allied vessel or if you find the arguments in favor of another incident more convincing.