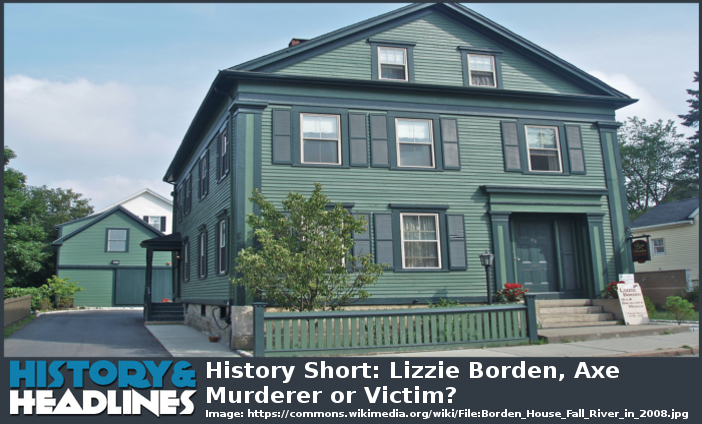 On August 4, 1892, the father and stepmother of 32 year old Lizzie Borden were brutally murdered, hacked to pieces with an axe!

Borden, born in Fall River, Massachusetts, was charged with murder in a sensational case that achieved national attention.  Despite public opinion that Lizzie had committed the gruesome crime, she was acquitted at trial 10 months after the crime.  Contributing to her defense was another axe murder that took place in Fall River only 5 days before her trial.

Lizzie lived in Fall River the rest of her life, though she was nearly always ostracized and looked at with suspicion.  She lived fairly comfortably on her inheritance and died in 1927 of pneumonia following gall bladder surgery.  Popular culture has repeatedly convicted her through the years in film, television, and literature, making her an almost mythical monster.

Question for students (and subscribers):  Do you believe Lizzie was guilty or innocent?  Please let us know in the comments section below this article.

Miller, Sarah. The Borden Murders: Lizzie Borden and the Trial of the Century. Yearling, 2019.

The featured image in this article, a photograph by DkEgy of the Borden’s House in Fall River, Massachusetts in 2008, has been released into the public domain worldwide by the copyright holder of this work.