Tuesday, October 27
Trending
You are at:Home»October»October 8»October 8, 1871: Worse than the Great Chicago Fire, The Peshtigo Fire

On October 8, 1871, the shores of Lake Michigan were the scene of 4 major fires, including the Great Chicago Fire, perhaps the most famous fire in American History. (Other fires took place in Manistee, Michigan and Holland, Michigan.) Unfortunately, on that same day, the Peshtigo Fire in the woods around Peshtigo, Wisconsin also occurred, killing between 1500 and 2500 people! This death total, even the lower estimate, makes this the deadliest wildfire in history, and the deadliest fire of any type in American history. In addition to these 4 fires, there was other unrelated fires the same day at Port Huron and White Rock, Michigan combined to mark this date as an incredibly unlucky date in the annals of American fires. Only 4 days later the city of Windsor, Ontario suffered a terrible fire as well.

To contrast these 2 great fires, the Great Chicago Fire killed about 300 people and burned out about 3.3 square miles of Chicago, a massive and deadly fire indeed. On the other hand, the Peshtigo fire killed at least 5 times as many people and burned out an astonishing 1875 square miles! That is about 600 times more area than the Chicago Fire and if you are counting in acres, is 1.2 million acres (or double the size of Rhode Island).

Extent of wildfire damage in October 1871

The Peshtigo Fire was so big and so vigorous that it produced a “firestorm,” a tornado like circular wind that sucked in people, animals and objects as big as rail cars! (This is the sort of horrible fire induced by American bombing in Japan and Germany late in World War II.) We know what caused the World War II firestorms, but we do not know what caused the Peshtigo Fire and most of the other fires on October 8, 1871. The tale of the Chicago Fire starting in the O’Leary barn is probably true, although we have no way of knowing if Mrs. O’Leary’s cow kicking over a lantern actually started the fire.

Speculation that a comet striking the area and sparking the fires was offered back then and more recently in books on the subject, although scientists claim the comet pieces could not cause a fire on Earth as meteorites are cool when impacting Earth, no longer hot and glowing as when we see them as shooting stars. More likely the extremely dry conditions that summer led to areas highly susceptible to being ignited by any number of means. Apparently other, smaller, fires were already burning in Wisconsin, Michigan, and Illinois before and during October 8 as well.

Note: As referred to earlier, the Allied bombing of Dresden and Tokyo also produced firestorms that sucked people and objects into the conflagration, but something you might not be aware of is Allied bombing planners actually studied the Peshtigo Fire to help plan the horrible firestorms created by Allied bombers! Those bombing raids actually exceeded the death and destruction caused by the first 2 atomic bombs.

Question for students (and subscribers): Have you ever had to escape from a fire?  If so, please explain the circumstances in the comments section below this article. 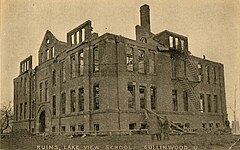 The Lakeview School after the Collinwood school fire of March 4, 1908 in Ohio.

Charles River Editors.  The Peshtigo Fire of 1871: The Story of the Deadliest Fire in American History.  CreateSpace Independent Publishing Platform, 2014.

Gess, Denise and William Lutz.  Firestorm at Peshtigo: A Town, Its People, and the Deadliest Fire in American History.  Holt Paperbacks, 2003.

The featured image in this article, showing people seeking refuge in the Peshtigo River by G. J. Tisdale, taken from Harper’s Weekly, 1871, page 1037 as reproduced at the Peshtigo Fire Museum, is in the public domain in the United States because it was published (or registered with the U.S. Copyright Office) before January 1, 1923.