On May 12, 1864, as part of the Battle of Spotsylvania Courthouse (Virginia) Union and Confederate forces fought in the “Bloody Angle” resulting in thousands of casualties on both sides, just part of what was by far the bloodiest and most horrific war in American history.  ( Note: Numbers vary with sources.)

Part of the Overland Campaign, Spotsylvania (spelled Spottsylvania at the time) the battle pitted the Union Army of the Ohio (IX Corps of the Army of the Potomac) against Robert E. Lee’s Army of Northern Virginia.  About 100,000 Union troops faced about 52,000 Confederate troops who had the opportunity to quickly entrench before the battle.  Union forces tried mightily to breach Southern defenses, resulting in massive casualties, as had many Civil War battles.  Tactics had not quite caught up with rapidly improving modern arms, resulting in such carnage. 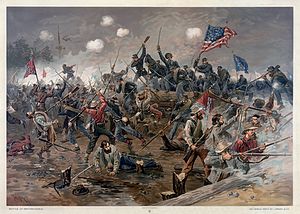 The Union forces and Confederate forces combined, Americans all, lost about 4200 killed, 19,000 wounded and another 8000 missing or captured (third bloodiest battle of the war). Although not usually considered one of the really famous battles of the Civil War (such as Gettysburg, Antietam, or Shiloh), to put the toll on American fighting men in perspective, compare the 30,000+ casualties in just a few days to some more famous American battles.

George A. Custer lost only 268 killed in one of the most famous “massacres” in US Army history.  The great debacle at Pearl Harbor resulted in only 2403 killed and 1178 wounded Americans, and the massive invasion of Europe known as D-Day resulted in 4414 Americans killed and perhaps 6,000 wounded.  At Okinawa, the largest battle of the Pacific in World War II, the US lost  11,000 soldiers, sailors and Marines killed and another 40,000+ wounded, but that was with over half a million Americans participating. 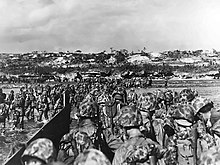 US Marine reinforcements wade ashore to support the beachhead on Okinawa, April 1, 1945.

Our recent wars fought with much smaller numbers of troops using much higher technology has thankfully resulted in much lower American casualties than some of the past wars.  Can you imagine losing 2.3% of our population of over 300 million in a war today?  That would be 7 million American dead!  Hopefully, that will never happen, but it does give some perspective on the suffering our nation did back in the Civil War.  After all, Americans were fighting the smartest and bravest foes they ever have, other Americans.