June 11, 323 BC: Mysterious Death of Alexander the Great 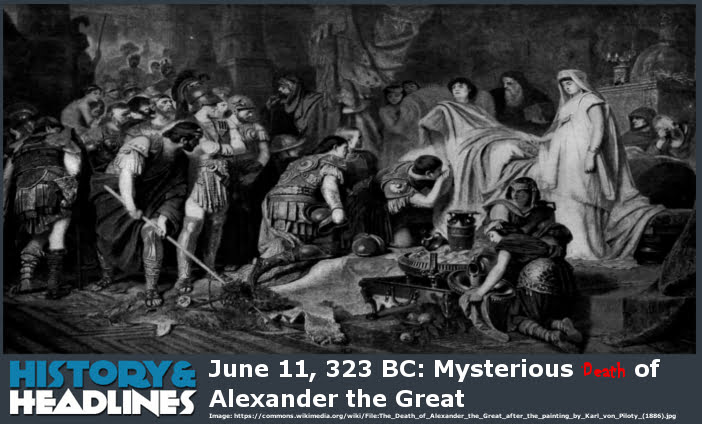 On June 11, 323 BC, one of History’s greatest conquerors and generals died at the age of 32, not on the battlefield where he had spent so much time putting his life in danger, but in bed in the Palace of Nebuchadnezzar II in Babylon.

The facts surrounding the death of Alexander the Great are somewhat muddled for so great a personage, but the reality is that the written historical accounts we have of the Macedonian King date from many decades after his death.  How much of his legacy is fact and how much is legend is impossible to determine, although of course we know for sure that he lived and who he was from coins and other physical evidence.

Some accounts have Alexander, a hard living heavy drinking man, drinking himself into a stupor from which he never recovered, becoming ill and dying a couple weeks later from a fever.  Others speculate that the great man was actually poisoned, usually by naming Antipater (a Macedonian general who had fallen out of favor) as the chief conspirator.  Besides revenge for being demoted, another possible motive could be the desire of Alexander’s men to stop expanding the empire through endless war and to get down to enjoying the spoils of war they already had.

Some scholars have dismissed the idea of poison being Alexander’s undoing, citing the unlikelihood that poison could have taken the two weeks of agony it took Alexander to die.  Proponents of the poison theory cite the existence of a poison derived from White Hellebore that may have been given to Alexander in his wine over the prolonged period leading to his death.  Other possible assassins that have been named include the King’s wine pourer and the philosopher Aristotle who had been Alexander’s mentor throughout his life.

Of course, people in those days had little idea of the causes of parasitic or microbial illnesses and Alexander may have died from what was then common natural illness such as Malaria, meningitis, Typhoid Fever or even West Nile Virus!  Infection, disease or illness of an internal organ (such as pancreatitis, diverticulitis, cancer, etc) may have also been the culprit, as could the accumulative effects of his previous injuries, illnesses and general hard living.

Although we will never know with certainty what caused Alexander’s death, we do know he failed to arrange for a smooth succession to the throne, leaving the Macedonians with a contentious period of struggle to produce “the strongest” which is the only clue Alexander gave as to who his preferred heir was to be.  Without Alexander’s firm leadership the Empire was divided into squabbling subdivisions. Although it is likely some proposed the child of Alexander’s wife, Roxanne, be made king, the generals and public officials wanted the throne for themselves and there would be no lineal succession.  Whatever the final instructions Alexander gave for the administration of the Empire and his final wishes are lost to history (though some cite an unverifiable “testament” left by Alexander) and in any case probably not followed.

Alexander died like any other mortal man dies, not as a deity as he would like to have been remembered.  Still, his tremendous accomplishments have left an imprint on our world that persists to this day, one of the most influential people in History.

Question for students (and subscribers): What do you think was the most likely cause of Alexander’s death?  Please let us know in the comments section below this article.

Chugg, Andrew.  The Death of Alexander the Great (A Reconstruction of Cleitarchus Book 5).  AMC Publications, 2013.

Romm, James.  Ghost on the Throne: The Death of Alexander the Great and the Bloody Fight for His Empire.  Vintage, 2012.

The featured image in this article, a drawing of The Death of Alexander the Great after the painting by Karl von Piloty (1886), is in the public domain in its country of origin and other countries and areas where the copyright term is the author’s life plus 70 years or fewer.