On February 27, 2018, the entire world celebrates International Polar Bear Day, a day to appreciate Ursus maritimus, the large white bear of the North. The largest land carnivore, Polar Bears are cute and cuddly looking, especially when young, but are probably the most dangerous of bears to humans. Needing ice from which to hunt their main prey (seals and other sea mammals), the loss of Polar Ice is threatening these magnificent animals.

Created by Polar Bears International, a Montana based non-profit organization dedicated to the education, research and action needed to save Polar Bears from possible extinction, International Polar Bear Day was created to encourage people to turn their summer cooling thermostat up 2 degrees and their winter heating thermostat down 2 degrees in order to greatly reduce the human impact on increasing greenhouse gasses in the atmosphere, gasses responsible for Global Warming and the subsequent reduction in sea ice vital to Polar Bear survival.

Unlike other bears that are largely omnivorous, Polar Bears subsist almost entirely on animal protein and fat (Which could include you or me if we are not careful! Do not be fooled by the cuddly bears in the Coca Cola commercials.), mostly seals, but including walruses, sea otters, Beluga whales, Narwhals, and other small porpoise and whale type animals. Polar Bears will also readily dine at the carcass of a dead larger whale species. The big white bears will also climb cliffs to get at sea birds nesting, eating the birds and their eggs, and will also catch and eat fish while swimming underwater.

Related to the Brown/Grizzly bears, Polar Bears are capable of cross breeding with their cousins, one more way the Polar Bear is in danger of disappearing, since under normal conditions the two species do not interact, but with the loss of sea ice and global warming forcing the two species together, hybridization could mean an end to our only white bear.

Weighing only a pound at birth, Polar Bear males can grow to 1500+ pounds and stand 10 feet tall on their hind legs. They live to around 25 years old, though possibly longer in some cases. Males are larger than females, and all Polar Bears are well insulated swimmers, oblivious to cold water and cold weather, sometimes swimming continuously for days or weeks at a time! They are so well insulated, that protracted running on the surface of land or ice can cause them to quickly overheat, no matter how cold it its. Their skin is actually black, with their hair being a transparent shade and not really white, in order to transfer sunlight to their dark skin to help keep them warm. They have a black nose that stands out in the polar whiteness of snow and ice, but the story about them covering their noses with their paws to aid in concealing themselves from prey is a myth.

Polar Bears are considered to be a “Vulnerable” species, a ranking just below “Endangered” and “Critically Endangered” within the “Threatened” category. Of course, human intrusion into the Arctic regions in search of oil and gas, or in pursuit of fish and sea mammals has eliminated some Polar Bear habitat, especially insofar as placing hunters in proximity to Polar Bears. The main threat to the continued existence of Polar Bears is Climate Change that reduces the amount of sea ice available from which the bears can hunt their food. There are about 20,000 to 25,000 Polar Bears left in the wild. 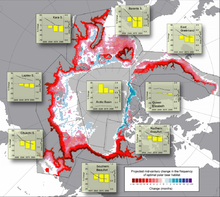 Question for students (and subscribers): How are you going to celebrate International Polar Bear Day? Will you adjust your thermostat to save energy? Will you go for an icy dip in freezing water? Visit your local zoo? Enjoy a Coke with a friendly Polar Bear? Or perhaps visit Churchill, Manitoba, the self-proclaimed Polar Bear Capital of the World?  Please let us know in the comments section below this article.

The featured image in this article, a photograph by Susanne Miller of a polar bear keeping close to her young along the Beaufort Sea coast in Arctic National Wildlife Refuge, is licensed under the Creative Commons Attribution 2.0 Generic license.  This image was originally posted to Flickr by USFWS Headquarters at https://www.flickr.com/photos/50838842@N06/5124077764. It was reviewed on 10 November 2010 by FlickreviewR and was confirmed to be licensed under the terms of the cc-by-2.0.  This image or recording is the work of a U.S. Fish and Wildlife Service employee, taken or made as part of that person’s official duties. As a work of the U.S. federal government, the image is in the public domain. For more information, see the Fish and Wildlife Service copyright policy.