On February 27, 1902, a British firing squad carried out the execution of convicted war criminal, Australian Lt. Harry “Breaker” Morant.  A rare thing indeed for the British Army to prosecute one of their own for war crimes in those days, Morant and fellow soldier Lt. Peter Handcock stood accused of the murders of several South African (Boer) prisoners of war and civilians.

The Second Boer War between the British and Dutch settlers of South Africa (Boers) started in October of 1899 and was near its end when Morant and Handcock were tried and executed.  The nearness to the end of the war led many sympathizers to believe Morant and Handcock were executed for political reasons to mollify the Boers instead of for good moral and legal cause.  This sentiment has grown through the years, leaving the memory of Breaker Morant as a martyr to Australians.  The presentation of Morant, Handcock, and a third defendant as victims of circumstance was depicted in the 1980 major motion picture, Breaker Morant, starring Edward Woodward as Morant.

In real life, Morant and his pals had gone on a killing rampage following the death of their commander in combat, killing at a minimum a Boer prisoner of war and 8 civilian school teachers and hospital workers.  They were also accused of killing missionary Rev. Carl August Daniel Heese, a South African ministering to the sick and injured at the Elim Hospital.  Heese threatened to expose the murders Morant and Handcock had committed at the hospital, presumably resulting in his murder to keep him quiet.  The 2 lieutenants were acquitted of the murder of Heese, but were tried, convicted and sentenced to death for the other 9 murders.  In fact, the convicted soldiers had left written confessions in their cell prior to being shot.

Despite the convictions, confessions, and barbarity of their crimes, Morant (especially) and Handcock have attained status as folk heroes, a scenario aided by the film that implied the men had been executed as scapegoats.  Today efforts to clear the names of the convicted murderers continue, and activists have sought pardons for the long dead soldiers.  Film director Bruce Beresford has stated that he regrets his film has helped perpetuate the myth that the Australians had been framed for murder.  Still, the film falsely shows Kaiser Wilhelm II of Germany as demanding the death penalty, and British collusion to ensure conviction and execution take place as a political necessity.  The film fails to mention that there were a total of 6 defendants, and that Morant and Handcock had the opportunity to gain immunity from prosecution if they would testify against their commanding officer for ordering a “no prisoners taken alive” policy. 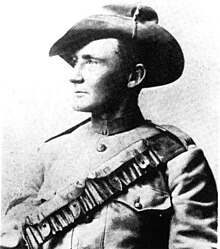 The case of Breaker Morant et al centered on what has become known as the “Nuremberg Defense,” the defense accused Nazi war criminals used after World War II when they excused their crimes by claiming they were only “following orders.”  This defense has been legally discredited by the rejection of that theory by the Nuremberg Trials Allied justices.

Question for students (and subscribers): What do you think of the “Nuremberg Defense?”  Are soldiers immune from crimes committed while under orders to do so?  Is the coercion of being ordered to partake in a certain activity with the possibility of prosecution and perhaps execution enough to make a reasonable person follow the illegal orders and commit the crimes?  Please share your thoughts on the subject in the comments section below this article. 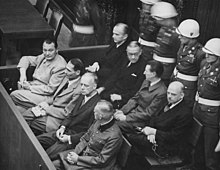 Defendants in the dock at the Nuremberg trials

The featured image in this article, a photograph by Harry ‘Breaker’ Harbord Morant (1864- February 27, 1902), circa 1900, from http://www.lighthorse.org.au/images/breaker.JPG, is of Australian origin and is now in the public domain because its term of copyright has expired. According to the Australian Copyright Council (ACC), ACC Information Sheet G023v17 (Duration of copyright) (August 2014).