Tuesday, February 25
Trending
You are at:Home»February»February 11»February 11, 1812: What is Gerrymandering?

On February 11, 1812, Elbridge Gerry, the Governor of Massachusetts, was accused of manipulating voting districts in a bizarre, uneven way in order to tailor voting demographics to suit his own political benefit. The resultant agonizingly ridiculously shaped voting districts resembled a dragon or salamander, giving rise to the term we know of today as “gerrymandering” when drawing voting districts. On March 26, 1812, the term “gerrymander” first made it to print in the Boston Globe.

The efforts of Governor Gerry were somewhat successful, and a new form of political chicanery was born. Ever since, the party in power with the opportunity to re-draw voting districts has often abused their public trust in order to enhance the welfare of their own party. Natural borders and historic regions are totally ignored as districts are drawn to water down the influence of one party while maximizing the influence of the other. This political sleight of hand is accomplished by attempting to overload a district or district with the opposition party’s voters in order to leave the other districts as majority in-power party enclaves. Another technique is to arrange voting boundaries so that the opposition is spread so thinly as to have no majority districts at all. Either way, the opposition party invariably cries “Foul!”

Some states have laws to protect opposition parties from ridiculous partisan efforts to manipulate voting maps, but often these measures fall victim to the ruthlessness of those politicos in power. There seems to be no depth of depravity politicians are willing to descend to in order to preserve their own power! In order to eliminate pesky liberal Congressman Democrat Dennis Kucinich in the 2012 election, Ohio Republicans redrew the 9th Congressional district in a blatant, absolutely ludicrous manner to stretch from Cleveland all the way to Toledo to put Kucinich in the same Congressional district as Marcy Kaptur, another prominent Democratic Representative. Only one of those nemeses of the Republican Party could remain in Congress, a political coup for the GOP.

In some cases, incarcerated prisoners are counted among the population, and districts are manipulated to include prisons (when prisoners cannot vote) in order to provide adequate evenness in population of districts but in reality, creating uneven numbers of actual voters. There is a slew of such tactics to manipulate voting power! 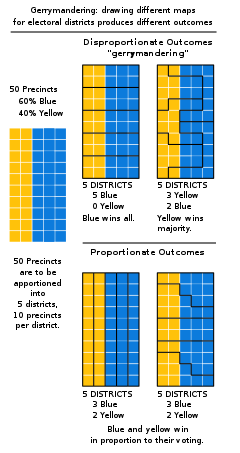 In the news in 2018 are several cases of gerrymandering that have gone to court as Democrats and Republicans spar over the drawing of voting districts. Sometimes the courts uphold the challenge, and sometimes they don’t, but either way, 2018 seems to be a particularly contentious year for such challenges.

(Note: Gerrymandering is not to be confused or conflated with “malapportionment,” which is improper district drawing resulting in numerically uneven districts by total population.)

Question for students (and subscribers): Do you have any tales of ridiculous instances of gerrymandering? If so, please share those tales with us in the comments section below this article.

Griffith, Elmer.   The Rise and Development of the Gerrymander.  Scott, Foresman and Co., 1907.