Friday, June 5
Trending
You are at:Home»December»December 8»December 8, 1854: What is The Immaculate Conception? (How About the Immaculate Reception?)

On December 8, 1854, Pope Pius IX issued his Apostolic constitution, Ineffabilis Deus, in which he established Catholic doctrine that the Virgin Mary, mother of Jesus, had been conceived without the ‘original sin’ that every other human is born with.  This bit of dogma is not to be confused with the Doctrine of Incarnation, which is the Virgin Birth of Jesus.  December 8th is thus celebrated each year as The Feast of the Immaculate Conception, a Catholic “holy day of obligation,” and even a national holiday in some predominantly Catholic countries.

Mary, daughter of St. Anne, is claimed by the Catholic Church (as of 1854) to have been conceived in the normal biological way, but that God acted upon Mary’s soul at conception so that she was born without ‘original sin,’ the only human born this way. 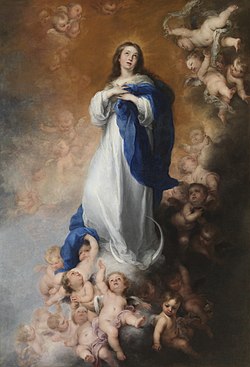 The Catholic Church makes no claim that Mary was conceived of a virgin herself.  Original Sin is a Catholic concept that all humans descended from Adam and Eve are stained with the “original sin” committed by those first two humans in the Garden of Eden when they disobeyed God and ate the fruit from The Tree of Knowledge.   Original Sin is also known as “ancestral sin,” something humans inherit as being fundamentally flawed from conception, a form of collective guilt, although with the opportunity to atone for that inherited sin.  This idea is opposed to “personal sin,” which stems from the acts (or thoughts) of a person as an individual during their life.

The concept of the Immaculate Conception is often conflated with the Doctrine of Incarnation regarding the conception and birth of Jesus to a woman (Mary) that was a virgin, untouched by a man (sexually).  Christian/Catholic doctrine states that Jesus Christ was formed in the womb of Mary by God himself, making Jesus fully human and also fully God at the same time in what Catholics call a “hypostatic union.”  The First Council of Ephesus in 431 established the Doctrine of Incarnation.  Some other Christian denominations refer to the condition of Jesus being God and Man as “oneness.”  The Doctrine of Incarnation is celebrated within the Catholic Church by the Christmas Mass and also by the Feast of the Annunciation, the anniversary of the day that the angel Gabriel told Mary of God’s plan to impregnate her with his Son.  Gabriel told Mary to name her son “Yeshua,” a Hebrew name that was later Anglicized to become “Jesus.”

Note:  An interesting, though some may think tasteless, cultural reference to the Immaculate Conception came in an NFL football game in 1972 during a Divisional Playoff game between the Pittsburgh Steelers and the Oakland Raiders.  With the Raiders leading the score with only 30 seconds left in the game, Steelers quarterback Terry Bradshaw threw a 4th down desperation (“Hail Mary”) pass from his own 40 yard line to running back John Fuqua.  The pass hit Fuqua, and possibly Raiders safety Jack “Bonecrusher” Tatum, and was scooped up by running back Franco Harris barely an inch or so off the turf.  Harris ran with the ball for a game winning touchdown, causing Pittsburgh sportscaster Myron Cope to dub the play “The Immaculate Reception,” an obvious pun of the term Immaculate Conception.  Whether the title of this play is disrespectful or not, the term “Immaculate Reception” gained wide acceptance into American football lore, and the NFL has itself deemed the play the Greatest Play in NFL History.

This “miraculous” pass play is also perhaps the most controversial play in NFL History, as critics (ie., Raiders fans) claim the ball never hit Jack Tatum, meaning the reception by Franco Harris was not a legal reception since the offense is not allowed to catch a ball that is first hit by another offensive player unless a defensive player touches the ball in between offensive players.  Additionally, some claim the ball actually hit the ground before Harris scooped it up.  Either way, the play was electrifying and stunning.

The featured image in this article, a photograph by Ciao411 of the procession of the Quadrittu of the Immaculate Conception taken on December 7 in Saponara, Sicily, has been released into the public domain worldwide by the copyright holder of this work.