On December 19, 2018, we take the opportunity to review the latest blockbuster DC Universe superhero film, Aquaman, a major motion picture that opens across the United States on December 21, 2018.  As you may know from previous reviews on this site, we usually only see movies we are likely to like, and like this movie we did!  Seen in Real D 3D, the film is lots and lots of eye candy.  The packed theater test audience included a better than usual representation of kids, and to say the kids got into the movie would be an understatement.  In fact, audience reaction was perhaps the best we have seen yet, which makes the likelihood of the film recouping its enormous $200 million budget (box office from early release is already $280 million!) and then some.  In our humble opinion, Aquaman is probably the most entertaining DC movie yet.

Note: Watch this website for an upcoming list of our favorite movies of 2018 (from the around 30 or so we have reviewed.)

Directed by James Wan, the guy that brought us horror movies such as Insidious, Insidious: Chapter 2, The Conjuring, The Conjuring 2, and Dead Silence, as well as the vigilante action thriller Death Sentence, Wan has a pretty good track record for directing movies we like.  With a running time of 143 minutes, you might think the kids might get fidgety or you might need a bathroom break, but do not worry!  The action is fast and furious, and the film seems much shorter when you watch it in real time.

Jason Momoa, the big muscular Khal Drogo from Game of Thrones, provides the right blend of big bad tough guy superhero while maintaining enough humility to avoid being cocky.  A favorite with the ladies (and men want to be him), Momoa is a hot star rising and is well cast in the role of Aquaman.  The big Hawaiian can be gruff, tender, funny, and coldly deadly, the entire gamut of emotions and personalities.  Nicole Kidman as Aquaman’s mother Atlanna from Atlantis is fetching while belying her 51 year old age (presumably 50 when the movie was filmed), seeming so much more innocent and younger than a woman her age has a right to be.  A former Best Actress Oscar winner, Kidman is a really, really good actress.  Aquaman’s female counterpart, Mera, is played by Amber Heard, a role she previously played in Justice League.  Heard plays a no-nonsense tough-girl superhero worthy Atlantean princess with flaming red hair and a fire inside to match.  Dolph Lundgren, Willem Dafoe and Patrick Wilson provide more star power to the big budget production.  One of the main villains is played by Yahya Abdul-Mateen II as Black Manta, a pirate.  He is a veteran of the Baywatch movie and The Greatest Showman.

Without providing spoilers, suffice to say the plot is about Aquaman being pressed into service to save the world from a ruinous war between the sub-surface dwellers and the surface dwellers.  The film is definitely in the fantasy realm, as the creatures and fantastic underwater universe is not easily explained by our brand of science.  The special effects are for the most part eye popping, making you wonder, “How do they do that?”  Many of the underwater creatures are truly epic and frighteningly real looking, while at time the film seems somewhat cartoonish.  Most often the eye popping trumps the cartoonish. 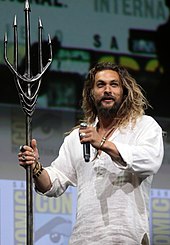 While throwing in the usual comic-book type of humor, the movie does have people and critters getting killed, but even the youngest audience members seemed unfazed by that fact.  Our observation of the audience was universal acceptance and a group having an enjoyable experience.  We admit that at time the dialog was a little stilted and corny, but no more so than any other comic-book based movie we have seen.  You can think of the film being described in a few words, namely, action, heroics, tension, relationships, action, heroics, treachery, and more action.  Oh, and a bit of a love story thrown in… awwww!  The audience is also treated to a bit of the background story of Aquaman as well.

If you are prepared to immerse yourself in comic-book fantasy action and adventure, then Aquaman is for you.  Be prepared to be dazzled by a highly visual movie that moves right along.  Bring the kids, as we could see no reason not to, as the violence depicted is not really the type we would expect any but the most extremely sensitive to find objectionable.  (The film is rated PG-13.)  We strongly recommend this movie for fans of the DC Universe and Marvel Universe type films, and even those (think Grandma and Grandpa even) that are unfamiliar with the characters will probably find the movie exciting and thrilling.  The movie review site Rotten Tomatoes finds 68% of reviews to be positive.

Question for students (and subscribers): Have you read any Aquaman comics?  Are you a fan of DC Comics?  Have you seen any of the other DC based movies (Superman, Batman, Wonder Woman, Justice League, etc.)?  Do you prefer to see movies in 2D or 3D?  Please let us know in the comments section below this article.

Avila, Mike. The Art and Making of Aquaman. Insight Editions, 2019.

The featured image in this article is a poster for Aquaman from http://www.impawards.com/2018/aquaman_ver11_xlg.html.  The poster art copyright is believed to belong to the distributor of the film, Warner Bros., the publisher, DC Entertainment, or the graphic artist.  It is believed that the use of scaled-down, low-resolution images of posters to provide critical commentary on the film, event, etc. in question or of the poster itself, not solely for illustration qualifies as fair use under the copyright law of the United States.  The image is used for identification in the context of critical commentary of the work, product or service for which it serves as poster art. It makes a significant contribution to the user’s understanding of the article, which could not practically be conveyed by words alone.  Use for this purpose does not compete with the purposes of the original artwork, namely the creator providing graphic design services, and in turn the marketing of the promoted item.  As film poster art, the image is not replaceable by free content; any other image that shows the same artwork or poster would also be copyrighted, and any version that is not true to the original would be inadequate for identification or commentary.  All DC Comics characters and the distinctive likeness(es) thereof are Trademarks & Copyright © 2018 DC Comics, Inc. ALL RIGHTS RESERVED.