Monday, April 6
Trending
You are at:Home»Society»Crime»A Dark Ages Genocide: When Danes were Once Not Welcome in England

On November 13, 1002, English king Æthelred II the Unready ordered the killing of all Danes in England, known today as the St. Brice’s Day massacre.

When Æthelred became King of the English in 978, his realm had experienced repeated incursions by Danes.  The situation was so bad that the English king even had to pay tribute to Denmark’s king starting in 991.  Not surprisingly, Æthelred would eventually want some kind of way out of these humiliations.  So, he decided to take decisive action on the feast day of a fifth century Bishop of Tours. 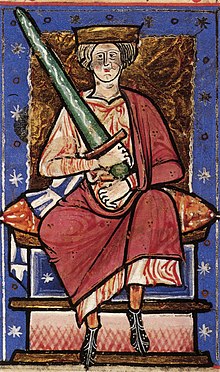 Æthelred in an early thirteenth-century copy of the Abingdon Chronicle

On that day, the English king ordered what we might in effect call the genocide of all Danish men in England.  We historians do not know the total number of Danes slain in the massacre, but the remains of 34 to 38 men aged 16 to 25 found in 2008 may be what is left of some of the victims.  Possible named victims also include the sister of Denmark’s king along with her husband.

Two years later, the English king attempted to justify the massacre while calling for the rebuilding of Saint Frithuswith‘s Church: “For it is fully agreed that to all dwelling in this country it will be well known that, since a decree was sent out by me with the counsel of my leading men and magnates, to the effect that all the Danes who had sprung up in this island, sprouting like cockle amongst the wheat, were to be destroyed by a most just extermination, and thus this decree was to be put into effect even as far as death, those Danes who dwelt in the aforementioned town, striving to escape death, entered this sanctuary of Christ, having broken by force the doors and bolts, and resolved to make refuge and defense for themselves therein against the people of the town and the suburbs; but when all the people in pursuit strove, forced by necessity, to drive them out, and could not, they set fire to the planks and burnt, as it seems, this church with its ornaments and its books.  Afterwards, with God’s aid, it was renewed by me.” 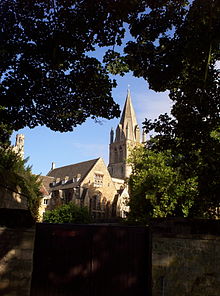 As can be imagined, killing the Danish king’s sister among other notable Danes might not necessarily result in a Viking monarch just turning the other cheek.  Instead, this king, Sweyn I Forkbeard, conducted further raids against the English over the next decade culminating in an invasion that oddly enough occurred almost exactly 1,000 years ago in 1013.  In fact, Sweyn’s invasion was so successful that he managed to force Æthelred into exile in Normandy, while Sweyn was crowned King of England on Christmas Day of 1013.  Sweyn died just five weeks later in February of 1014.  Æthelred then returned for a short second reign, dying in 1016.  In that same year, Sweyn’s son, Cnut the Great would reconquer England for the Danes and rule a northern empire that included England, Denmark, and Norway.  Thus, Æthelred’s attempt to purge England of Danes was a failure that only invited more intense Danish incursions on English soil.

Questions for students (and subscribers): Was Æthelred justified in his attempted purge of Danes from England?  Why or why not?  Please let us know in the comments section below this article. 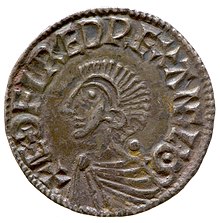 For more on the above incident in the broader context of English history, please check out the following book:

Tout, T. F. (Thomas Frederick).  An Advanced History of Great Britain From the Earliest Times to the Death of Queen Victoria: With 63 Maps and Plans, by F.T. Tout … (1909).  Cornell University Library, 2009.

The featured image in this article, a gold mancus of Æthelred wearing armour, 1003–1006, photographed at the British Museum by PHGCOM, has been released into the public domain by the copyright holder of this work worldwide.