Catholic on Catholic Violence, or Losing Sight of the Whole Point of the Crusades! 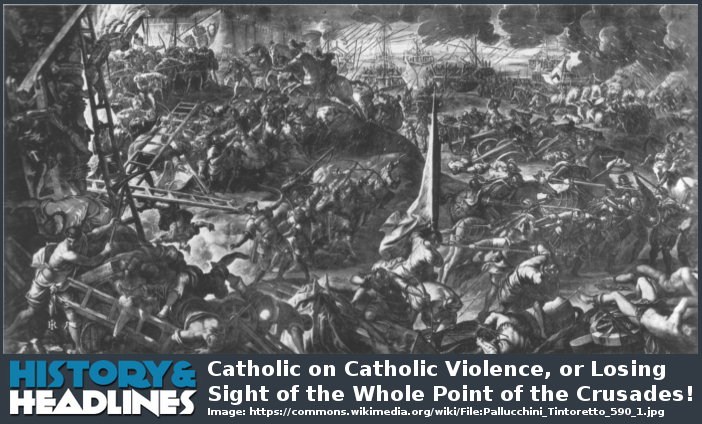 On November 10, 1202, despite letters from Pope Innocent III (a much more popular pope than Guilty III) forbidding it and threatening excommunication, Catholic crusaders on the Fourth Crusade began a siege of the Catholic city of Zara (now Zadar, Croatia).

Whereas the First Crusade successfully restored Jerusalem to Christian rule and laid the basis for the Kingdom of Jerusalem, subsequent crusades were far less productive for the crusaders.  Jerusalem was lost after the failed Second Crusade.  Nor would it be regained during the Third Crusade, even with the participation of Europe’s three most powerful (and badass nicknamed!) monarchs: Holy Roman Emperor Frederick Barbarossa (“red beard”), French King Philip Augustus “the God-given”, and English King Richard “the Lionheart”.

The Fourth Crusade occurred over 100 years after the First Crusade and by then times had changed considerably.  At least the first three crusades went for the Holy Land and were about undoing the wrong (as perceived by Christians) done in 637 when Muslims captured Jerusalem from the Byzantine Empire.  The Fourth Crusade, by contrast ultimately did not even go to the Holy Land, but instead resulted in the Sack of Constantinople in 1204 and the partition of the remnants of the Byzantine Empire among the leading crusaders.

If that is what the Crusaders did to fellow Christians in one of Christendom’s greatest cities, well, let us just say that what happened to Zara two years earlier was not much better.  In November of 1202, the crusaders, allied with Venice, challenged Hungary and Croatia for control of the Zara, a rival town to Venice.  The crusaders launched the attack on the Catholic city in order to receive Venetian support for their crusade.  The combined crusader and Venetian force took the city in just under two weeks.

Pope Innocent III had envisioned the crusaders undertaking an attack on the Holy Land via Egypt, which the crusaders would have had to seize as their first objective.  He did not plan anything along the lines of Catholics battling fellow Catholics.  His response was to then excommunicate the crusading army and their Venetian allies.  He wrote, “Behold, your gold has turned into base metal and your silver has almost completely rusted since, departing from the purity of your plan and turning aside from the path onto the impassable road, you have, so to speak, withdrawn your hand from the plough […] for when […] you should have hastened to the land flowing with milk and honey, you turned away, going astray in the direction of the desert.”  The crusaders, now excommunicated from the Catholic Church, instead of heading to Egypt continued onto the Christian Byzantine Empire, in effect destroying it until its restoration several decades later.

The Crusades would ultimately end in failure less than a century after the siege of Zara and even the eventually restored Byzantine Empire was now weakened beyond salvation.

Question for students (and subscribers): Were the Crusaders justified in their attack on Zara?  Please let us know in the comments section below this article.

Given the amount of daring, betrayal, and adventure associated with the Fourth Crusade, it is not surprising that it has encouraged many an author to tell some of its tales.  Some notable examples include these books:

Bartlett, W. B.  An Ungodly War: The Sack of Constantinople & the Fourth Crusade.  Sutton Publishing, 2000.

Share. Facebook Twitter Pinterest LinkedIn Tumblr Email
Previous ArticleThe Only Instance of a Municipal Government Being Overthrown in United States History
Next Article World War I did not really End on the Eleventh Hour of the Eleventh Day of the Eleventh Month…of 1918!