On January 26, 2020, the United States and the entire world was shocked by the news feed that basketball legend, Kobe Bryant, age 41, had died in a helicopter crash in California.  Initial reports said a total of 5 people, including Bryant, had died in the crash, while later reports indicated 9 people had actually been aboard, and that there had been no survivors.  Among those killed was reported to be the 13 year old daughter of Bryant.  (Other victims were unnamed until proper notification of relatives could be made.)  Losing a sports legend as important as Kobe Bryant is thankfully a rare thing, especially at so young an age.  Bryant was immensely popular, both for his off the court good works, his engaging personality, and his on the court heroics, which we will discuss here in a list of his greatest accomplishments.  While a stunned nation mourns, we take a look at many of Kobe Bryant’s achievements and highlights.  (Not including probably his greatest accomplishment, his 4 wonderful daughters.)

Kobe was named the 1996 Naismith Prep Player of the Year, denoting his status as the finest high school basketball player in the United States.  Of course, he was also named a First Team Parade All-American as well.

8. Played all 20 years with the Los Angeles Lakers. 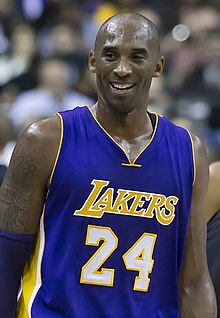 Bryant with the Los Angeles Lakers in 2015.  Photograph by Keith Allison from Hanover, MD, USA.

In the modern age of professional sports finding a premier player that spends his entire career with the same one and only team is a rarity to say the least.  Yet Kobe Bryant played his entire career before his adoring fans in Los Angeles.  (If only LeBron James would have done the same!)

At least he was until LeBron James passed Bryant’s career tally of 33,643 points scored, trailing only Kareem Abdul Jabbar and Karl Malone.  During his 20 year career, he poured in points at the rate of 25.0 per game.  He had become the youngest NBA player ever to score 30,000 points when he reached the milestone.  He led the entire NBA in scoring in 2006 and 2007, scoring 35.4 and 31.6 points per game respectively. 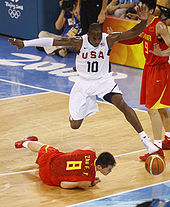 Bryant avoiding a collision in a game against China at the 2008 Summer Olympics.  Photograph by Eric Draper.

Not many players have earned 5 Championship rings, but with Kobe on the team the Lakers were perennial threats to run the table.  In fact, his Lakers teams won 3 Championships in a row, in 2000, 2001 and 2002.  Kobe won the NBA Finals MVP Award for the 2009 and 2010 seasons.  Kobe played on and starred with the Gold Medal winning 2008 and 2012 US Olympic Basketball teams.

Kobe first made the All Star team in 1998, and then ran off a streak of 17 more selections to the elite status from 2000 to 2016, an NBA record, including his final year when he was battling the accumulated injuries of his long and active career.  In 1998 Kobe was elected by the fans as the youngest NBA All Star in history.  Almost as a side comment, Kobe also took home the All Star MVP Award 4 times which ties the NBA record.

On January 22, 2006 while playing against the Toronto Raptors Kobe achieved another measure of greatness by scoring 81 points in that single game, the second highest point total scored by an individual player in NBA history.  (The record is 100 points by Wilt Chamberlain.)  His scoring line was 28 of 46 shooting overall, with 7 of 13 made from the 3 point line.  He also shot a blistering 18 of 20 foul shot attempts.

For the 2007-2008 season Kobe soared to the top of his profession by snagging the coveted Most Valuable Player Award, in recognition for his fine season and leadership of his team.  Although he did not lead the league in any single category, his overall performance was magnificent across the board, boasting a 28.3 points per game scoring average with 6.3 rebounds and 5.4 assists per game, along with 1.8 steals per contest. 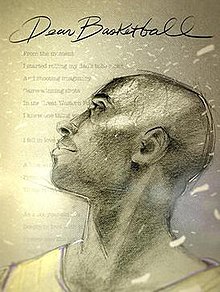 In 2017, Bryant wrote and narrated an animated short film, Dear Basketball, which won the Academy Award for Best Animated Short Film for that year.  The film was based on his letter in late 2015 announcing his intention to retire when the 2015-2016 season ended.

Kobe Bryant had suffered the injuries and wear and tear you would expect a 20 year veteran of the NBA to experience when playing most of every game for 2 decades.  Unlike most players that finish as a worn out husk of their former self, Bryant finished with his characteristic flair, scoring an incredible 60 points in his final NBA game!  April 16, 2016 playing against the Utah Jazz, Kobe poured in his 60 points, marking the highest scoring game by any player in the NBA that season.  Could he have played another year?  What do you think?

Question for students (and subscribers): Who is your favorite all-time NBA player?  Please let us know in the comments section below this article.

Thompson, Patrick. Kobe Bryant: The Inspirational Story of One of the Greatest Basketball Players of All Time! Independently published, 2019.

The featured image in this article, a photograph by Rico Shen of Kobe Bryant (center-left) participating in the NIKE Taipei Flagship Store Launch Ceremony at his 2007 Asia Tour, is licensed under the Creative Commons Attribution-Share Alike 3.0 Unported license.