On August 29, 1350, the English naval fleet under King Edward III defeated the Castilian fleet at the Battle of Winchelsea in the English Channel after the Castilian fleet had previously attacked and captured English trade ships.  Although not establishing naval dominance over the Spanish for good, this battle showed that the English took naval threats seriously and would meet the enemy head on to protect its ships and coastlines.  The Battle of Winchelsea precursed what would become a massive English victory against the Spanish Armada in 1588.

As mentioned in the introduction, the Battle of Winchelsea did not yet establish English naval dominance; however, after the defeat of the great Spanish Armada, the exploits of legendary English sailors such as Sir Francis Drake and Sir Walter Raleigh made the English a naval force to be reckoned with, both in terms of exploration and colonization as well as in their offensive and aggressive handling of Spanish ships encountered on the high seas.

During the Napoleonic Wars, around the time that England formally joined with Ireland and Scotland to form the United Kingdom of Great Britain and Ireland, what kept the British in the war at all was their mastery of the seas.  Try as they may, the French just could not dominate the Royal Navy and were unable to isolate the British Isles.  Lord Admiral Nelson’s victories at the cost of his arm and then his life make him arguably the greatest fighting sailor of all time.

In the 19th century, ships went from being built from wood to being built from steel, and they went from being powered by wind to being powered by steam.  In 1906, the Royal Navy unveiled the HMS Dreadnought, a warship whose design became the new state of the art for all nations.  In fact, battleships during this time were then called dreadnoughts.

At the Battle of Jutland in World War I, the Royal Navy failed to destroy the German Imperial Fleet; however, they succeeded in sending the German ships home where they sat out the remainder of war, unable to challenge for naval supremacy.  The U-Boat war waged against Britain also failed because of the intrepid British seamanship (and some help from the U.S. Navy…).

When Germany again tried to dominate the seas during World War II, the Royal Navy was once again up to the task, destroying the mighty Bismarck and other heavily armed and armored German ships, and once again the Royal Naval would not let itself be defeated by U-Boats (and once again with help from the U.S. Navy). 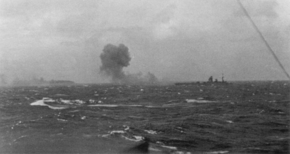 HMS Rodney firing on Bismarck, which can be seen burning in the distance

Although still masters at seafaring, the early part of the war in the Pacific finally saw the end of British naval dominance.  The Japanese had worked diligently to build a mighty fleet of their own which included submarines and aircraft carriers, and British ships suffered embarrassing defeats.  Once the U.S. Navy built up its own strength, the Allies were again in charge, but to this day it has been the U.S. Navy and not the Royal Navy that rules the oceans.

The Royal Navy is still a potent fighting force but no longer strives for domination of the seas.  The disbanding of the British Empire makes such a task irrelevant today, but one can be reasonably certain that the Royal Navy is ready for any conflict that might develop.  Just ask the Argentinians!

Question for students (and subscribers): Who do you think had the greatest navy in history?  Please let us know in the comments section below this article.

Herman, Arthur.  To Rule the Waves: How the British Navy Shaped the Modern World.  Harper, 2004.

The featured image in this article, a photograph by Classical Numismatic Group, Inc. (http://www.cngcoins.com) of a gold noble coin of 1354, the obverse showing Edward III seated in a cog, figuratively “ruling the seas,” is licensed under the Creative Commons Attribution-Share Alike 3.0 Unported license.