On April 24, 2013, Communist China proved to be less than tolerant of ethnic dissent when authorities attempted to crush suspected ethnic Uyghur “terrorists.”  Violence broke out in response to perceived heavy handed police action, and at least 21 people were killed, 15 of which were reported to be policemen and authorities.  Previously in our article “10 Oppressed Minorities Around the World” we discussed the problem the Uyghurs have with the Chinese government, especially insofar as the predominant religion of the Uyghurs is Islam in a country that is officially atheistic.

The April 2013 violence occurred in Bachu County, Xinjiang, China, when 3 government officials observed a “suspicious group of men” hanging around a house on the outskirts of the city of   Kashgar.  Apparently, the officials told the police the men were armed with knives, and the police immediately suspected the group to be a pack of terrorists.  As the officials called in the suspicious men to the police, those men and more that had been inside the house surrounded the officials and killed them.  The killing, provoked only by the officials calling the police, elicited a predictable government response of vigorous police action to arrest the perpetrators. 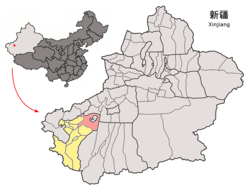 Location of the county (red) within Kashgar Prefecture (yellow) and Xinjiang.  Map by Croquant.

Local police, only some of which were armed, responded to the scene to investigate and were greeted by angry Uyghurs that immediately set upon the hapless cops, setting off a battle that saw 3 police officers and 3 of the belligerent citizens killed.  Another 9 of the surviving policemen holed up in the subject house, which was set on fire by the irate Uyghurs.  The 9 cops inside the house were also killed, running the total of police and government officials killed to 15.  A total of 6 of the Uyghur dissidents were also killed before order was restored.

Among the police/government people killed a total of 11 were ethnic Uyghurs from the local province.  The other 4 government people killed were ethnic Han Chinese.  Police arrested 19 suspected dissident Uyghurs, with 2 convicted of murder and sentenced to death.  Another 3 suspected “terrorists” were given sentences between 9 years and life in prison. 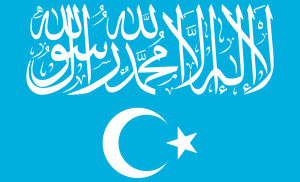 The flag the of Turkistan Islamic Party.  Image by MrPenguin20 based on flag by Gazkthul seen here.

Obviously, the violence arrests, and 1 day trials provoked an angry response from Uyghurs, an ethnic minority that has thirsted for their own homeland (about 8 to 9 million Uyghurs reside in China).  In the next couple months, riots resulted in the deaths of 27 more people, at least 10 of which were shot by police.

Xinjiang Province is the Westernmost of China’s provinces, with the Uyghurs comprising the ethnic majority (45.8% of the population).  The diverse population of  Xinjiang Province includes 40.5% Han Chinese, with the remainder divided between various Central Asian groups. The Uyghurs are a Turkic people and are overwhelmingly members of the Islamic faith, almost all Sunni Muslim, but with varying degrees of adherence and particular practices.  At least 5 ethnic Uyghurs have found their way into confinement at the US terrorist prison at Guantanamo Bay, Cuba.

A Camp Delta recreation and exercise area in Guantánamo Bay, Cuba. The detention block is shown with sunshades drawn on 3 December 2002.

Questions for Students (and others): Should Uyghurs be allowed their own country?  If so, what about the other minorities in the region?  Should those others be forced to live in an Uyghur country?  Is the Uyghur cause worth support from the United States?  Please let us know in the comments section below this article.

Bovington, Gardner. The Uyghurs: Strangers in Their Own Land. Columbia University Press, 2010.

The featured image in this article, a map by TUBS

showing the Xinjiang region in China, is licensed under the Creative Commons Attribution-Share Alike 3.0 Unported license.