On April 24, 1184 B.C., at least according to traditionalists, the city of Troy fell to Greek invaders, thus bringing about the end of the epic Trojan War that began some ten years earlier in 1194 B.C.

The story of this war has been repeated and altered many times since whatever actually occurred in history.  A consistent element of the ever-evolving story, however, is that it all began with perhaps the most beautiful woman of her era: Helen of Troy.

Helen of Troy by Evelyn De Morgan (1898, London); Helen admiringly displays a lock of her hair, as she gazes into a mirror decorated with the nude Aphrodite.

Before the war began, the beautiful Helen was married to King Menelaus of Sparta, brother of King Agamemnon of Mycenae, who was married to Helen’s sister.  The two brother’s ruled over two of the most powerful city-states in Ancient Greece and thus had influence over many of the other Greek city-states of the time.

A crisis arose when Prince Paris of the also powerful city-state of Troy arrived in Greece, fell in love with Helen, and took her back with him from Europe to Troy, a city located in Asia Minor across the Aegean Sea.   The outraged brothers, Menelaus and Agamemnon, rallied their fellow Greeks to war against Troy for what they saw as treachery by a Trojan prince who had come to them as a diplomat and departed with a Spartan queen.  The ensuing war dragged on for some ten years and only concluded with what is probably the most famous act of deception in military history.

Unable to breech the formidable walls of Troy, the Greeks came up with a brilliant trick, the brain-child of the wily King Odysseus of Ithaca.   A giant hollow wooden horse, an animal that was sacred to the Trojans, was built from the wood of a tree grove sacred to god Apollo, with the inscription: “The Greeks dedicate this thank-offering to Athena for their return home,” but the Greeks did not actually return home.  Instead, the hollow horse was filled with soldiers led by the legendary hero Odysseus.  The rest of the army burned the camp and sailed for Tenedos, an island where they could hide their fleet while Odysseus and his men carried out their mission in Troy.

When the Trojans discovered that the Greeks were gone, believing the war was over, they joyfully dragged the horse inside the city, while they debated what to do with it.  Some thought they ought to hurl it down from the rocks, others thought they should burn it, while others said they ought to dedicate it to Athena.

Both Cassandra (a daughter of the king and queen of Troy) and Laocoön (a Trojan priest) warned against keeping the horse.  Nevertheless, the Trojans decided to keep the horse and turned to a night of mad revelry and celebration.  During that night, an Achaean spy, signaled the fleet stationed at Tenedos when it was midnight and the clear moon was rising and the soldiers from inside the horse emerged and killed the guards and opened the gates to the city. 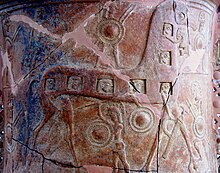 The earliest known depiction of the Trojan Horse, from the Mykonos vase c. 670 BC

Troy was then sacked by the rampaging Greeks in a horrific episode of rape and pillage.  The number of men, women, and children who were ruthlessly raped or murdered is unknown, but among the victims were King Priam of Troy who was slain and his daughter Cassandra who was raped.  Priam’s infant grandson was thrown by the Greeks down from the walls of Troy! 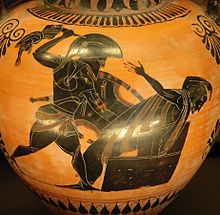 As for Helen, the woman with the face that launched the thousand ships to begin the war, her former husband Menelaus intended to kill Helen, but, overcome by her beauty, threw down his sword and took her to the ships. 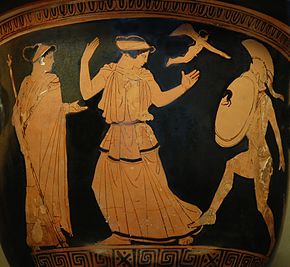 Helen and Menelaus: Menelaus intends to strike Helen; captivated by her beauty, he drops his sword. A flying Eros and Aphrodite (on the left) watch the scene. Detail of an Attic red-figure krater c. 450–440 BC (Paris, Louvre)

Thus concludes a great, classic story, albeit at times rather terrifying, but did it actually happen?  Unfortunately, our primary sources of this conflict are filled with all kinds of supernatural occurrences that modern scholars doubt really took place.  The gods and goddesses of Ancient Greek mythology are major characters in the original accounts of the Trojan War, frequently intervening in the various events described above.  So, if these divine beings and their interventions are not real, then how much of the rest of the story is also fiction?  Was there really a Helen of Troy and an Odysseus or is their appearance in the stories of the Trojan War akin to Indiana Jones or Captain America battling the Nazis in more recent popular culture?  We know there were Nazis, sure, but we also know they did not face off against these modern heroes.  Imagine, however, some kind of disaster occurring where our only available sources of the 1930s and 1940’s were the Indiana Jones and Captain America films.  That possibility is essentially what we have with the regards to the Trojan War and our sources about it.

Question for students (and subscribers): What do you think?  Archaeological evidence suggests that Troy existed, but is there any truth to the traditional accounts of the war itself?  Do you think Helen, Odysseus, etc. were real people?  Please let us know in the comments section below this article.