Tuesday, August 4
Trending
You are at:Home»April»April 2»April 2, 1911: Too Many People in the World (Population Bomb is Exploding!)

On April 2, 1911, the Australian Bureau of Statistics conducted their first ever national census. Most countries conduct some sort of periodic census, and we here in the United States do so every 10 years, a critical process that results in how many representatives to Congress each state gets (and electoral votes) and how Federal funds are distributed. In 2018, the Trump Administration announced the 2020 Census questionnaire would include a question asking if the respondent was a citizen or not, a volatile and contentious issue being debated at this time.

That first Australian census showed a population of 4,455,005 people living in Australia, but only those “exclusive of full-blooded Aborigines.” Today, Australia has a population (including people of Aborigine descent) of 24+ million, not a lot of people for such a large country (7.5 people per square mile). While still a not heavily populated country (#53 in the world), the fact that over 8 million of the Australian population was born outside of the country means other countries are producing a surplus of people. In fact, Australia’s population has grown by over 25% since 2002 in spite of a decreasing birth rate (#164 in the world).

The title page of the first Commonwealth Census in 1911.

As we have said repeatedly in other articles, there are too many people in the world and the human population is growing way too fast! While the growth rate shows signs of slowing down, the additional people are straining the ability of the Earth to provide air, water, and food for all these people. More people = More pollution, and the ability of the Earth to absorb that pollution is not unlimited. Fossil fuels are finite, and more people means more burning of fossil fuels, further aggravating climate change and depleting fuel resources. More people means more houses, roads, parking lots, and other forms of structure that eliminate natural percolation of water into the ground to replenish ground water. Aquifers (especially in the US) are draining and not being refilled, making a water crisis and future Dust Bowl almost a certainty. More people means more domestic animals, and those cows and pigs produce incredible quantities of methane, as well as use up vast amounts of crops as feed. More people means deforestation, resulting in declining Oxygen production and natural means of cleansing the air. More people means more farming which means more run off of soil, further muddying and silting up our waterways. 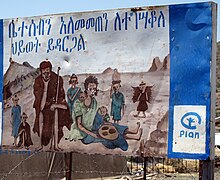 A family planning placard in Ethiopia. It shows some negative effects of having too many children.

The population of India is expected to grow by about 200 million people between 2015 and 2042, an enormous number of people considering there are only 5 countries in the world today with a population of 200 million or more. By 2100, estimates of the world population are as high as 17 billion people (7,4 billion today), a number sure to strain the ecology and our infrastructure to the breaking point. 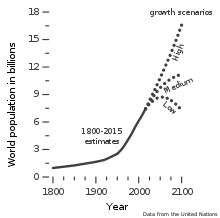 Back in the 1960’s and 1970’s the ballooning human population was a hot topic, and received a lot of attention, but has somewhat died down since then. In fact, overpopulation threatens the well being and future of mankind more than any other factor. Could population strains result in wars? Maybe. Famines? Almost for sure. Ruined environment? Absolutely. In 1960, Mexico had a population of just under 35 million people, while today that population is a staggering 124 million, an increase of nearly quadruple the amount of people! No wonder so many Mexicans are desperate to immigrate to the United States.

Most European countries have lowered birth rates to the point of little or no growth, and can experience growth only through immigration. What would it take for the rapidly reproducing countries, mostly poor countries without the ability to absorb and feed the additional population, to curb their population growth? The answers are not easy, as throwing around words like “eugenics” are sure to result in heated debate. Limiting the number of children allowed by law is another topic many find distasteful. So what do we do? Make birth control drugs and devices available at no cost? Make abortion and “morning after” pills available at no cost? Any of these proposed solutions will attract virulent opposition on religious or “moral” grounds.

Question for students (and subscribers): What do you think of the population growth of humans in the world? Do you have any suggestions as to how we can control our destructive population growth? (Tell us if you do.) Or is the best policy to do nothing about population growth and let nature take its course? Share your thoughts and opinions with us in the comments section below this article.

Malthus, Thomas. An Essay on the Principle of Population. Oxford University Press, 2008.

The featured image in this article, a geological map of Australia from the 1911 edition of the Encyclopædia Britannica, is in the public domain in the United States.