Grace Kelly, already a famous movie star before meeting Prince Rainier of Monaco in 1955, was the product of a 3 time Olympic Gold winning oarsman and the first female head of the physical education department at Penn State.  With bloodlines like that, it was no surprise when her short acting career (age 20 to 26) earned her an Academy Award (Oscar) and Golden Globe awards, among others.  Starring with A-list leading men like Clark Gable, Jimmy Stewart, William Holden and Gary Cooper, Frank Sinatra, and Bing Crosby, the beautiful young Grace met Prince Rainier, the monarch of the tiny country of Monaco in Cannes in 1955.

At the time, the handsome prince was rumored to be looking for a wife, as a treaty dating back to 1918 ruled that Monaco would revert back to being part of France and lose its autonomy if the Prince failed to produce an heir!

In one of the most famous marriages in history, referred to at the time as “The Wedding of the Century,” Grace Kelly became Princess Grace when she wed Prince Rainier.

Grace provided Rainier with 3 heirs (Albert, Caroline, and Stéphanie), safely keeping Monaco in the hands of the Grimaldi family.  Grace acquired 142 titles upon marrying Prince Rainier, and all 142 were recited at the wedding ceremony!

Rainier, Albert, Caroline, Stéphanie, Nancy Reagan and Robert McCormick Adams at the presentation of a portrait head of Princess Grace at the National Portrait Gallery in October 1986

Although Grace was still interested in acting, the dignity of her position precluded a continued acting career, although she did participate in poetry readings and narrating other films.  Grace was honored with a star on the Hollywood Walk of Fame in 1960 and in 1999 was named 13th on a list of greatest actresses (by the American Film Institute).

Despite being married to the head of state of a foreign country, Princess Grace kept her American citizenship as a dual citizenship with Monaco.  The word denoting something is of Monaco is “Monegasque!” 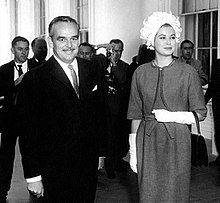 Prince Rainier III and Princess Grace arrive at the White House for a luncheon, 24 May 1961

Alas, the fairy tale did not have a happy ending, for on September 14, 1982 Grace apparently suffered a stroke while driving with her daughter, Princess Stephanie, and died in the ensuing crash.  The world was stunned and saddened (much like when Princess Diana died in a car wreck) at the loss of such a beautiful and gracious person. Notable attendees at her funeral were Nancy Reagan, Princess Diana, movie stars, European Royalty and heads of state.

Rainier was heartbroken and never remarried, dying in 2005 and buried with his beloved princess.  Grace Kelly and her family had to provide Rainier with a dowry of $2 million to allow the wedding to happen!

Princess Grace has been remembered and honored with being the first actress to “grace” a US postage stamp, her image on the 2 Euro coin, a 1983 made for television film about her (Starring Cheryl Ladd), as well as museum showings of her wedding dress and other mementos and various buildings and foundations named for her.  Of course, she can be seen forever young and beautiful in the 11 major motion pictures she starred in! 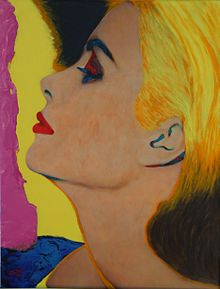 Question for students (and subscribers): What is your favorite Grace Kelly movie?  Tell us in the comments section below this article.

Taraborrelli, J. Randy.  Once Upon a Time: Behind the Fairy Tale of Princess Grace and Prince Rainier.  Grand Central Publishing, 2003.