A Look at Holidays with a Dark Origin: Things You Did Not Know 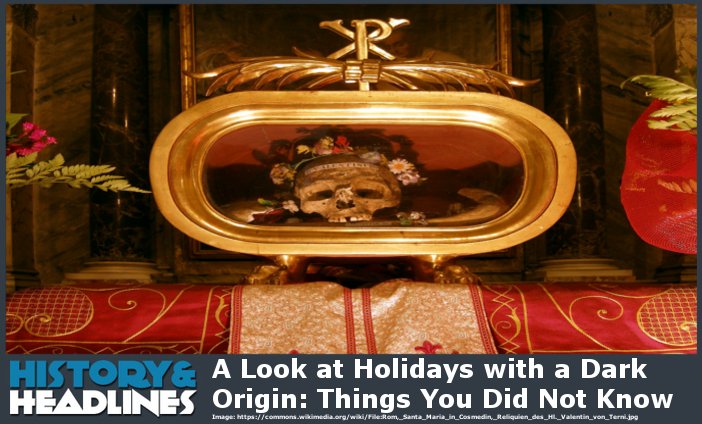 As Christmas approaches, we ask, “Who doesn’t like the holidays?” In general, holidays are viewed as fun and relaxing, as people have a chance to exchange presents and eat scrumptious food. They get to do fun things like enjoying free spins at casinos, watch fantastic parades, and take a break from their daily routine, but although holidays have a positive connotation nowadays, it was not always the case. Some holidays were born out of hideous events that took place centuries ago, and with time, people forgot what had led to the celebrations in the first place.

Before the winter holiday season, you can take a look at a few holidays that you did not know had horrendous stories attached to them.

While a lot of Americans think of Thanksgiving as a day that celebrates the beginning of the harvest seasons, some people refer to it as the “national day of mourning”.

While in the past, New England Colonists celebrated military victories on this particular day, Native Americans were fighting for their survival.

In 1637, for example, after a long feud between settlers and the Pequot tribe over supplies, a militia force blocked the village’s exits and set it on fire. Anyone who tried to escape was killed. It was estimated that 400 to 700 Pequot villagers died that day.

Many people wonder whether celebrating this holiday, with the bloody history that is associated with the country’s growth, is appropriate.

Not everyone celebrates the day dedicated to love and affection, but overall, it is considered as one of the most positive days of the year. Not many people stop to think about who St. Valentine was – because the truth is not pretty.

According to stories, in the year 269, the emperor of Rome banned marriage, as a family man was less inclined to leave his home and fight brutal battle, but one person, St. Valentine, refused to stop marrying couples. He was tortured and executed for his beliefs and practices on February 14, but according to legends, a different Valentine also died on the same day. According to stories, he helped Christian prisoners to escape from Roman prisons, and after he was found out, he was executed.

Another gruesome event took place on the same day, hundreds of years down the line. The story goes that in 1929, the feared Al Capone and his gang executed seven men, attaching another horrifying event to the day that celebrates love.

Although St. Patrick’s days is a religious celebration, commemorating the arrival of Christianity in Ireland, a lot of people think of this day as merely a reason to get drunk. But who was St. Patrick anyway?

According to historical records, his life was full of hardship. At the age of 16, St. Patrick was kidnapped and sold into slavery. Later on, he escaped and decided to convert the pagan Irish to Christianity. After his death, which it is said occurred in the year 461, two factions fought for the rights to the corpse. As a result, a bloody battle broke out, taking place near a river. Oddly enough, both sides believed they left the battlefield with the body of the beloved saint, which ended the feud (according to the “Annals of the Four Masters”).

So much more can be said about all three holidays, but what matters is that we recognize they all have one thing in common: a tragic past.  While it is important to move forward and stay positive, we cannot ignore the hardships and wrongdoings that occurred as history was made.

Question for students (and subscribers): What is your favorite holiday?  Please let us know in the comments section below this article.

The featured image in this article, a photograph by Dnalor 01 of a relic of St. Valentine in the church of Santa Maria in Cosmedin, Rome, Italy, is licensed under the Creative Commons Attribution-Share Alike 3.0 Austria license.