8 Evil Actions of the Islamic State 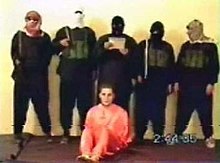 Abu Musab al-Zarqawi (October 30, 1966 – June 7, 2006), a militant Islamist from Jordan who ran a paramilitary training camp in Afghanistan, became known after going to Iraq and being responsible for a series of bombings, beheadings, and attacks during the Iraq War.  He formed al-Tawhid wal-Jihad in the 1990s, and led it until his death in June 2006. In late 2004 he joined al-Qaeda, and pledged allegiance to Osama bin Laden. Afterwards, al-Tawhid wal-Jihad became known as Al-Qaeda in Iraq (AQI), and al-Zarqawi was given the Al-Qaeda title, “Emir of Al Qaeda in the Country of Two Rivers”.  This group is what eventually became the Islamic State of Iraq.

As the leader of Iraq’s most notorious terrorist group, al-Zarqawi personally beheaded Nicholas Evan Berg, a businessman who went missing on April 9, 2004. His widely publicized beheading was shown in a video May 11, 2004.  Next, al-Zarqawi personally beheaded Owen Eugene Armstrong, a contractor for the construction firm Gulf Supplies Commercial Services of the United Arab Emirates.  Armstrong was kidnapped on September 16, 2004 and beheaded on September 20, 2004.

This sickening practice has continued in a variety of forms, one of the most disturbing of which being the Tweeted photograph of Australian Jihadist Khaled Sharrouf’s son — a child, 7, raised in the suburbs of Sydney — struggling with both arms to hold up the decapitated head of a slain Syrian soldier.  Next, on August 19, 2014, American journalist James Wright Foley, kidnapped in 2012, was reportedly beheaded by the Islamic State on video tape. 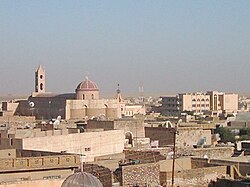 The attack on the Our Lady of Salvation Syriac Catholic cathedral of Baghdad, Iraq took place during Sunday evening Mass on October 31, 2010. The attack left at least 58 people dead, after more than 100 had been taken hostage. The al-Qaeda-linked Sunni insurgent group the Islamic State of Iraq claimed responsibility for the attack; while Shia cleric Ayatollah Ali al-Sistani, Shia groups, and Iraq’s highest Catholic cleric condemned the attack.  Such attacks on Christian holy sites continued in Summer 2014, when Islamic militants  seized a monastery in northern Iraq, kicking out its Christian monks as well as Christian residents of Mosul.  On August 7, 2014, IS fighters took control of the town of Qaraqosh in the province of Nineveh in northern Iraq, which forced its large Christian population to flee.

By the end of August 2014, the Islamic State’s anti-Christian audacity reached a new extreme when they apparently even threatened the Pope of the Roman Catholic Church!

On May 1, 2014, ISIS carried out a total of seven public executions in the city of Ar-Raqqah, northern Syria.  Pictures that emerged from the city show how ISIS had been carrying out public crucifixions in areas under its control.  In most of these crucifixions, the victims were shot first and their bodies then displayed, but there were also reports of crucifixions preceding the victims being shot or decapitated. In one case a man was said to have been crucified alive for eight hours, but there was no indication of whether he died. 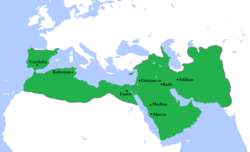 On July 2, 2014, Abu Bakr al-Baghdadi, the self-proclaimed caliph of the new Islamic State, said that Muslims should unite to capture Rome, a city that has never been under Muslim control, in order to own the world.  He called on Muslims the world over to unite behind him as their leader.  Thousands of people from Europe and North America have responded to the call and are now fighting with the Islamic State in Iraq and Syria.  Meanwhile, the Islamic State has further threatened to “liberate” Istanbul, a city once known as New Rome and later as Constantinople. 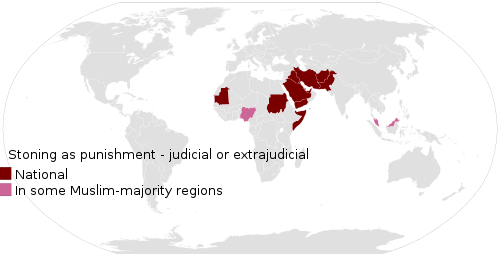 While I am not fan of adultery, I suspect many in the civilized world will regard stoning as an outdated way to punish perpetrators of this sinful act.  Yet, that does not seem to be the case in ISIS controlled territory.  On July 20, 2014 and August 11, 2014, media reports revealed that ISIS was responsible for at least two stonings of young women alleged to have been adulteresses.

Conflicting reports (see here versus here) suggest that ISIS may be trying to enforce the brutal and sickening practice of female circumcision in territory under their control. 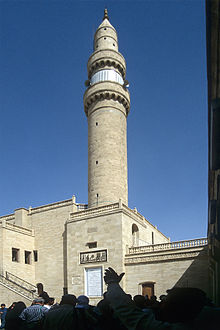 On July 24, 2014, ISIS blew up the Mosque and tomb of the Prophet Yunus (Jonah) in Mosul, with no reported casualties.  Residents in the area said that ISIS had erased a piece of Iraqi heritage.  Then, on July 26, ISIS blew up the Nabi Shiyt (Prophet Seth) shrine in Mosul. Sami al-Massoudi, deputy head of the Shia endowment agency which oversees holy sites, confirmed the destruction and added that ISIS had taken artifacts from the shrine to an unknown location.

On August 5, 2014, Al Jazeera reported that an IS offensive in the Sinjar area of northern Iraq had forced 30,000–50,000 Yazidis to flee into the mountains fearing they would be killed by the IS. They had been threatened with death if they refused conversion to Islam.  On August 6, The Islamic State kidnapped 400 Yazidi women in Sinjar to sell them as sex slaves.  On August 8, The United States of America (US) asserted that the systematic destruction of the Yazidi people by the Islamic State was genocide.  Just two days later, The Huffington Post reported that Islamic State militants have killed at least 500 members of Iraq’s Yazidi minority, burying some alive.  On August 14, Britain’s Daily Mail reported that the Islamic State might even be trying to impregnate Yazidi women in order to destroy that ethnic group’s blond bloodline!

Elsewhere, other genocidal activities included The Islamic State executing 700 members of a Syrian tribe, mostly civilians, reportedly for refusing to convert to Islam on August 17, 2014.

In mid-August 2014, The Islamic State banned the study of philosophy and chemistry in schools in the northern Syrian city of Al Raqa and established an Islamic curriculum for students thereby taking a closed minded approach to learning.

Question for students (and subscribers): What do you consider to be the most evil action of the Islamic State?  Please let us know in the comments section below this article.