On March 3, 1951, music history was made when the first song deemed to be “rock and roll” was recorded.  Called “Rocket 88,”  the lively song was recorded by Chess Records at Sam Phillip’s studio in Memphis and is credited to Jackie Brenston and the Delta Cats who were actually Ike Turners’s band, the Kings of Rhythm.  In fact, the song was written by Brenston and Turner, though Turner was not originally credited.

Based on the 1947 hit “Cadillac Boogie” and influenced by the instrumental hits “Rocket 88 Boogie” parts 1 and 2,” “Rocket 88” was also about the popular Oldsmobile model,  the Rocket 88.  Done in a style of jump blues combined with swing, it was also given a raw, biting edge and featured a new technique called “fuzz guitar,” making it something new.  Despite being different in sound, it was a hit and reached #1 on the R&B charts.

Popular among the African-American community, “Rocket 88” also caught the attention of the white public, and Bill Haley and the Saddlemen (later Bill Haley and his Comets of “Rock Around the Clock” fame) did a cover version of the hit within a few months of its release.

Of course, several other songs have a claim to being the first Rock and Roll release, and many serious historians do not narrow it down to a single song but to important, influential records that defined the genre.  Of those, “Rocket 88” is certainly one of the most significant.  Sam Phillips, however, who had founded Sun Records, named it the first Rock and Roll release. 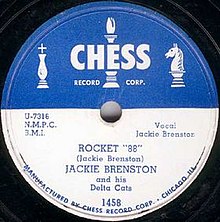 Brenston would go on to become an alcoholic and died only aged 49 without having achieved any further musical accomplishment, while Turner went on to even more success, especially with his wife, Tina Turner, with whom he is an inductee to the Rock and Roll Hall of Fame.  Turner was also nominated for 5 Grammy awards and won 2 of them!  He died in 2007 after years of drug addiction and trouble with the law.  Rock and Roll, however, lives on and is healthier than ever.

Question for students (and subscribers): Do you have a favorite rock and roll song?  Please let us know in the comments section below this article.

You may also share the story with your friends on any of the below-listed social media.

Guitars were rare and expensive back then, but nowadays they come in all shapes, sizes and forms. You can read this article to learn more about them if you are interested in getting one for yourself: https://guitarsquid.com/best-acoustic-guitars/

The featured image in this article, a photograph by Carol M. Highsmith (1946–) of Sun Records Studio, Memphis, Tennessee, where reputedly the first rock-and-roll single, Jackie Brenston and his Delta Cats’ “Rocket 88” was recorded there in 1951 with song composer Ike Turner on keyboards, leading the studio to claim status as the birthplace of rock & roll, is available from the Carol M. Highsmith Archive collection at the United States Library of Congress‘s Prints and Photographs division under the digital ID highsm.04870.  According to the library, there are no known copyright restrictions on the use of this work.  Carol M. Highsmith has stipulated that her photographs are in the public domain.