10 Women On Top of Their Field

On May 21, 1932, Amelia Earhart landed her airplane in Northern Ireland, becoming the first woman to fly non-stop solo across the Atlantic Ocean.  Earhart was an aviation pioneer, not just as a woman, but as a pilot, period.  Here we list 10 women who were right at the top of their respective fields.

Whether you like her style of poetry or not, it cannot be argued that she is on top of her field, having recited her poems at the inauguration of Presidents Clinton and Obama.  (It had been 32 years since a poet recited at an inauguration when she did so in 1993.)  Having a resume that includes working as a prostitute, journalist, and actress as well as writer, she is also a college professor.  Earning 3 Grammy awards and having been nominated for a Pulitzer Prize (poetry) and a Tony Award (acting), this Presidential Medal of Freedom winner is quite accomplished. 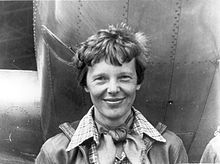 As detailed above, Earhart was a pioneer and record setting aviatrix, one of if not the most famous aviator of her time (after Charles Lindbergh). Her disappearance during her around the world flight in 1937 has intrigued aviation and history buffs ever since.

Possibly the greatest tennis player of all time and absolutely the greatest female tennis player, Marina’s records are unmatched by male or female players.  From 1975 to 1994, 20 straight years, she was ranked in the world’s top 10 in singles tennis, which no other player of either sex has matched.  Her other records are too numerous to list here.

A Democratic congresswoman from California, Pelosi is the only woman to ever serve as Speaker of the House of Representatives of the United States, the highest position any legislator can hold, male or female.  As such, from 2007 to 2011 she was 2nd in line to be president (if the president and vice president became unable to perform their jobs.)  If the Republican majority in the House is lost in 2016, it is likely Pelosi will again become Speaker.

This American duo won the 2004, 2008, and 2012 Olympic Gold Medal in their sport and are considered the greatest beach volleyball team of all time.  Immensely popular, they have both appeared on television shows.

This incredible athlete swam from Cuba to Florida, a distance of 110 miles, without a break and without a shark cage in 2013, the only person to have done so.  Oh, and she was 64 years old at the time!  Some of her other interesting swims include swimming all the way around Manhattan Island, swimming from the Bahamas to Florida (102 miles), and being the 13th ranked squash player in the world.  This athlete is also an accomplished author, radio hostess, and has appeared on television.  Her 1979 swim from the Bahamas to Florida was a distance record not just for women, but also beat any man’s effort in history.  Unfortunately, she did come in last place on Dancing With The Stars in 2014.  Maybe if it had been water dancing…

Her television show ruled the airwaves and her book club could make or break a new book.  The first African-American billionaire, Oprah was so dominant that she could deliver millions of votes to a political candidate with her endorsement.  Somehow, she even found time to star in movies.

Being the first woman to win a Nobel Prize is good, being the only person to ever win a Nobel Prize in 2 different fields is better!  Awarded the prizes in Physics and later Chemistry, Madame Curie broke new ground in science, discovering Radium and Polonium, the first 2 known radioactive elements.  She had to do her work in Paris because her native Poland still did not take female scientists seriously around 1900.

Question for students (and subscribers): Which women would you add to the list?  Please let us know in the comments section below this article.