On May 14, 1973, the United States launched Skylab, America’s first space station. During the era of space exploration there have been significant milestones reached by the US, Russia, and other countries. We list 10 of those here, hopefully the most interesting ones if not the most important. So many milestones! The list to cover them all would be huge.

If the Soviets were insensitive to killing millions of their own people, it is no surprise that they sent a dog into space with no plan of retrieving her alive. Laika was a female mutt, and died within a few hours of lift-off from extreme heat. Her spacecraft was named Sputnik II.  Ever conscious of their public image, the Soviets did not tell the world how Laika really died until 2002. Prior to that the story was she ran out of oxygen.

Carried into space by a Space Shuttle, the Hubble Telescope has been sending us fantastic pictures of deep space that could never be achieved by earthbound telescopes (because of impurities in the atmosphere). The telescope was designed to continue to function until some time between 2014 and 2021.

Considering that only the Soviet Union/Russia, The United States, and China have launched manned spacecraft, it is commendable that people from 38 different countries have flown into space courtesy of the US and Soviet Union/Russia. Cosmonauts from Poland, East Germany and Bulgaria quickly followed Remek into space on Soviet spacecraft. As a technical note, Pavel Popovich, born in the Ukraine, went into space in 1962 and by some measures could be considered the first non-American and non-Russian, but of course at that time Ukraine was part of the Soviet Union.

Launched into space by the Soviet Union, Tereshkova, though born in Russia, is actually of Byelorussian descent. Another first for her is that she was not a member of the military at the time, making her the first civilian in space as well.

Retired in 2011, there were 5 operational Shuttles made and used, with a prototype test vehicle made first that never went into space. Unfortunately, 2 of the Shuttles were lost in accidents killing their entire crew each time. 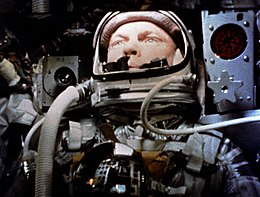 Although Glenn was not the first American in space and Gagarin had already orbited the Earth, this Marine Corps fighter pilot veteran became an American hero, riding his fame to a long career as a US Senator from Ohio.

Shepard’s milestone flight was a big step for the US, but was a sub-orbital flight and failed to match the Soviet Gagarin’s orbiting of the Earth. Still, it was a big deal to Americans at the time.

This humble little satellite flying around the Earth and over the US threw Americans into a frenzy of Space Race Fever, feeling scared and inadequate that their Cold War arch enemies could be ahead of them in the Space Race. If the Soviets could launch a satellite into orbit, it meant they could launch a bomb (presumably nuclear) to any point on the globe, a sobering fact.

Finally, the US eclipsed the Soviets in the Space Race! Neil Armstrong, of Wapakoneta, Ohio stepped onto the surface of the moon and into history as the first man on the moon. His partner on the moon landing, Buzz Aldrin, became the second man to walk on the moon. Lately, things have not been so impressive with the American space program, and we currently have no rockets and spacecraft that can launch people into space. Incredibly, if we want to send people we have to ask the Russians to do it for us!

It is hard to realize today just how exciting and dangerous it was for Gagarin to make his milestone flight. At the time, his flight was one more Soviet victory in the Space Race, much to the consternation of Americans.

Question for students (and subscribers): Which ones would you list?  Please let us know in the comments section below this article.

Bell, Jim.  The Space Book: From the Beginning to the End of Time, 250 Milestones in the History of Space & Astronomy (Sterling Milestones).  Sterling, 2013.