On August 18, 1920, the United States ratified the 19th Amendment to the Constitution.  This move gave American women the right to vote, also known as women’s suffrage.  Women have always struggled to be treated as equals to men, both under the law and in common practice.  Here we list 10 of the laws, inventions or events that have helped bring equality to the sexes.  The emphasis is on American history.  In case you think anything is missing, please mention it in the comments section.

Not only was this Ohio college the first to admit women on a regular basis, in 1835 it also became the first to admit African-Americans as well.  Though founded in 1833 by Presbyterian ministers, the college currently has no religious affiliation.  History and Headlines Note:  With a tuition starting at $61,000 a year, Oberlin is the most expensive college or university in Ohio.

Of course, a woman has not yet been elected president of the United States of America, but if that ever happens, it would indeed constitute a tremendous achievement for American women.  The U.S. has already had a woman as Speaker of the House and women who served as Secretary of State.  Twice women have run as the party nominee for Vice-president, so if a woman does not get elected President first, perhaps a lady will become our Vice-president.  Before the 2016 Presidential election concluded, it seemed more than likely Hillary Clinton would be nominated as the Democratic candidate for President and go on to win the national election.  Of course we now know that although Clinton made history by becoming the first woman major party nominee for President of the United States, she did not win the general election and did not become our first female President.

As part of the Education Amendments of 1972 to the Civil Rights Act of 1964, this law prohibits anyone being denied equal access to any federally-funded education program or its benefits as a result of their sex.  Since most institutions of higher learning are, to some extent, supported by the Government, this law has given women and girls access to equal educational opportunities.

These two unrelated acts are combined in this section because they both serve to greatly enhance the standard of living for elderly widows or single women who are not receiving a survivor’s pension or who do not have continued health insurance from a deceased or non-existent husband.  Even girls who have become orphans and young widows benefit from Social Security, as do disabled women.  Although these programs help men as well, they are particularly beneficial to women.

Created in support of the 14th Amendment to the Constitution that guarantees due process of law to all Americans, the Civil Rights Act ensures that no one in the U.S. is discriminated against because of race, color, religion, sex or national origin.  Since President Lyndon B. Johnson signed the Act into law, this law has been used repeatedly to look out for the rights and welfare of women.

This commission was formed to act as a law enforcement agency for the Civil Rights Act of 1964 and for any other laws that cover issues relating to gender, race and religion.  In this capacity, the Commission files suit against employers who violate the various anti-discrimination laws.

Sometimes called “The NAACP for Women,” NOW is an organization that looks after the rights and welfare of women and girls across the U.S.  Ready to pounce when local, state or federal governments do not adhere to anti-discrimination laws, NOW has given the needs of women a national voice and has encouraged women to seek higher education and professional-type jobs instead of the clerical and service-type jobs that they traditionally had held.  NOW also seeks to empower minority women such as African Americans and lesbians, while encouraging American women in general to run for elected offices.

(Note: Although the author is fully aware of the religious and moral arguments against abortion, he is commenting on women’s empowerment only.)  This landmark Supreme Court Decision basically made abortion legal in the U.S. and gave women the final say in their reproductive capabilities.  Women would no longer be forced to bear unwanted children, allowing them more personal freedom.

Its approval for use in the U.S. in 1960 gave women almost total control over whether they wanted to become pregnant or not.  Sex without the need for condoms to prevent pregnancy liberated both women and men and has also redefined and reshaped the attitude of women toward sex, making it more fun for them. 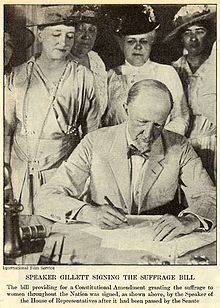 Since women outnumber men, the right to vote is the most important law affecting them.  If they wanted, women could come together and work to pass just about any law they deemed fit.  Of course, like any other grouping of people, women do not think or vote as a unanimous mob, but there have been many elections that were clearly decided by a women’s majority.

For more interesting events that happened on August 18, please see the History and Headlines articles: “Virginia Dare is Born” and “Would you Like Your Witches Fried or Boiled?“