Earlier, we posted an article about the greatest bomber in history, but you may be wondering what else rounds out the top ten…

With 18,400 built, it remains to this day the most prolific American warplane ever produced.  Slightly faster than the B-17 and capable of carrying more bombs farther, the B-17’s superior ruggedness keeps this airplane from scoring higher.  The Liberator was operational with the Indian Air Force until 1968!

The German Gotha was the premier bomber of World War I with a range of over 500 miles and a ceiling above 21,000 feet.  Used mostly as a night bomber, its capabilities increased throughout the war with each new variant, raising its top speed from 87 mph to 112 mph.  The Gotha defended itself with 1 to 3 7.92 mm machine guns.

The biggest, fastest, highest flying bomber of World War II the B-29 was the first strategic bomber to have pressurized crew compartments and remote control gun turrets.  B-29’s were the world’s first nuclear bombers and dropped the only 2 nuclear bombs used in combat.  It was also used by the RAF and the Soviets copied an interned B-29 in order to make cloned copies!  It was used by the USAF until 1960 as a bomber and even longer in other roles. 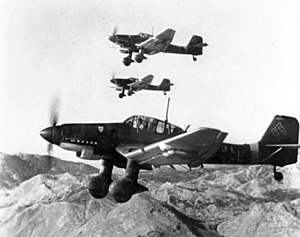 The premier dive bomber of its day with sophisticated systems that allowed it to deliver bombs more accurately than other dive bombers of World War II, the main drawback of this rugged airplane was its low top speed.  Still, the 6500 built for the German Luftwaffe struck terror in its victims with its characteristic dive whistles!  The Stuka was able to blow off a landing gear if the other was damaged to allow it to make a survivable belly landing! 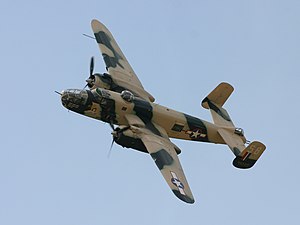 The only US warplane named after an actual person, the B-25 was the premier medium bomber of World War II and served until 1979 with the Indonesian Air Force!  Carrying as many machine guns as the larger B-17 and B-24, no other light bomber could defend itself like the Mitchell.  Superb in the low altitude ground attack role, some B-25’s were equipped with the ability to fire 16 .50 caliber machine guns forward for strafing! In addition, some models were equipped with a forward firing 75 mm howitzer, the heaviest forward firing armament on any plane ever!  The almost 10,000 B-25’s saw service with all branches of the armed forces and was famous as the bomber used in the “Doolittle” raid on Japan.

The only bomber on the list with a crew of one, the F-117 is not a fighter despite its misleading designation.  The first operational stealth warplane invisible to radar, the F-117 successfully led the attacks in both Gulf Wars using precision guided bombs to destroy enemy air defenses allowing other non-stealthy planes to make their attacks. The F-117 was made obsolete by the fielding of the F-22 Raptor stealth fighter in 2008.

The biggest and fastest turboprop bomber ever made, the Bear is roughly the Soviet equivalent of the B-52, but a little smaller and with less capacity.  Still in use today with the Russian Air Force, the Tu-95 has been built in several variants for multi-purpose use.  If the US would ever have been bombed by bomber aircraft, they would have been Tu-95’s.

Not able to fly as high or any faster than the B-17 and B-24, the Lancaster was certainly a rugged counterpart to the American 4 engined bombers of World War II.  Although not as heavily armed, with a normal complement of 8 .303 caliber machine guns, being flown at night reduced some of the need for self-defense.  Capable of carrying bigger bombs than any other bomber of the War, the Lancaster dropped monster bombs weighing 22,000 lbs, 12,000 lbs, and 9,250 lbs! A truly great bomber, the Lancaster last saw service in Canada in 1963.

The biggest, fastest, most heavily armed bomber when first introduced, the B-17 is what people picture when told to think of a World War II bomber.  A dozen .50 caliber machine guns gave this plane its name. Incredibly rugged, this aerial battleship was the mainstay of the bombing campaign against Germany and the star of movies such as Memphis Belle and 12 O’Clock High.  The B-17 was the first of the line of legendary Boeing built bombers, followed by the B-29, the B-47 and the B-52.  Boeing apparently knows how to make bombers! 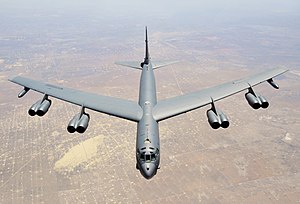 First flown in 1952, this massive 8 engined jet bomber was the backbone of America’s nuclear deterrent during the Cold War and has dropped untold thousands of tons of conventional bombs on Viet Nam, the Persian Gulf and Afghanistan.  Incredibly, this workhorse will be on active duty until at least 2040 (barring the Apocalypse…)!  Older than the people who fly them, the B-52 remains one of the most intimidating weapons of any type.

Question for students (and subscribers): Have you ever flown in a bomber plane?  Please let us know in the comments section below this article.

Crosby, Francis. The World Encyclopedia of Fighters & Bombers: An Illustrated History of The World’s Greatest Military Aircraft, From the Pioneering Days of Air … and Stealth Bombers of the Present Day. Southwater, 2010.