In line with Black History Month, which in the United States and Canada is February, and as part of our series celebrating women famous for being naked, we highlight 10 black women whose nudity was historically, culturally or socially significant.  If you can come up with any other black women who fit the criteria of this list, please mention them in the comments section below.  Please keep all responses respectful.  History and Headlines Note: In the headline of this article, the women are being referred to as “black” and not African-American because black women from all nationalities were considered and not just Americans.

Sarah Baartman was probably born a slave in South Africa.  She became known as the “Hottentot Venus” because Hottentot was then another name for the Khoi people from whom she came.  At around the age of 20, this poor woman was sold to Europe where she was put on display in a freak show for her ample “assets;” she had elongated labia, and her rear end was so big and protruded so far out, that one could nearly balance a cup on it.  The indignities did not stop after death,  and she was dissected to explore the differences between races, and her skeleton, body cast and preserved genitals were put on display at the Natural History Museum in Angers, France.  With the advent of the sexual revolution, feminists then complained that the exhibit degraded women, and it was removed in the 1970s.

In 1896, National Geographic became one of the first magazines of repute to show a woman’s breasts.  The breasts belonged to a South African Zulu bride who was photographed on her wedding day standing next to her bridegroom.  Though shocking for prudish Victorian times, it was deemed acceptable as it allowed for the unadulterated study of an indigenous culture.  Of course, this might bring up the question of racism as the magazine would surely never have dared to show a photograph of  bare-chested white woman, even if taken in her natural setting. (It must be pointed out, however, that except for nudists, there are no predominantly “white” cultures, countries or colonies that go out their daily business in their birthday suit.)

In Africa, on the other hand, to this day, women in many African tribes go topless, sometimes even fully naked, and for them nudity is neither sexual nor pornographic but something entirely normal.  The Zulu bride probably never realized how groundbreaking the picture of her would be and just how many people would see it. 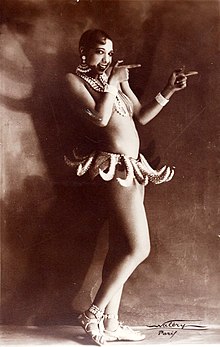 This African-American born woman who later became a citizen of France took Paris by storm in the 1920s where she became known for her comedic appeal, erotic dancing and for practically appearing nude onstage, something she could not have done in prude America.  In her own words, “I wasn’t really naked.  I simply didn’t have any clothes on.”  Though she wasn’t Chiquita Banana, her most famous outfit consisted solely of 16 bananas being strung around her waist.  Whereas in France and Europe she was treated like a superstar, later attempts at success in America failed because American audiences rejected the thought of a black woman being just as sophisticated as high-class Frenchwoman.  In addition she refused to entertain in venues that practiced segregation, having initially left the United States to avoid racism.  As a result, American audiences missed out on a performer Ernest Hemingway, who also lived in Paris at that time, described as, “…the most sensational woman anybody ever saw or ever will.”

Jennifer Jackson has the distinction of being Playboy magazine’s first black Playmate of the Month.  While a Playboy Bunny working in a Playboy Club, she was selected to be the main model/centerfold for the March 1965 issue.  Though highly controversial at the time, Jennifer Jackson’s name and face soon fell into obscurity, and she is barely remembered for her “first.”  Not just a pretty face with a sexy body, she was then able to become a college graduate and before retiring, worked for the University of Washington and as a social worker protecting abused children.

For its October 1971 cover, Playboy magazine had the courage to let a single black model grace the cover.  Though not the first black woman to be on a Playboy magazine cover, this distinction going to Jean Bell who was on the January 1970 Playboy magazine cover with 4 white models, Darine Stern was the first black woman to be “entrusted” with carrying the magazine.  Perhaps it was provocation on the part of Playboy, perhaps it was a sign of the times that America was ready for it after the magazine had tested the waters with Jean Bell, but it was the right move, and the cover has since become a classic.  Of all famous Playboy covers, it was Darine Stern’s pose that cartoon character Marge Simpson decided to imitate when she herself “posed” for the magazine!

In the early 1970s, Blaxploitation, the exploitation of blacks in stereotypical roles on film, though primarily for an urban black audience, was popular in theaters.  When coupled with “sexploitation,” Pam Grier was one of the biggest stars to emerge from it.  In her first leading role as Coffy, she portrayed a liberated, empowered black female action star who meant business while making use of her ample assets.  Pam made many such movies, but rather than merely being demeaning, what can be said for them is that they celebrated the black female; for example, as Coffy, Pam wore her hair naturally in an afro.  In the 1990s, Quentin Tarantino renewed interest both in her and in blaxplation by giving her the lead in Jackie Brown, a role for which she received a Golden Globe nomination.

Famous singer, actress and former beauty queen Vanessa Williams famously lost her Miss America crown when it was discovered that she had posed for nude photographs.  In her capacity as Miss America, Vanessa Williams was also culturally significant because she was the first African American woman to win this title.  Penthouse magazine, however, rained on her parade and published nude and sexually explicit photographs she had posed for a year earlier while she was working for a photographer.  Playboy had initially turned down the photographs because they did not want to jeopardize the reign of the first black Miss America, especially since she was already being targeted with death threats and hate mail, but Penthouse had no such qualms.  Less than a year after being crowned, Vanessa Williams had to resign from her position; she obviously no longer represented the wholesome image expected of a Miss America, but she was allowed to keep her tiara and scholarship money.  She was “succeeded” by runner-up Suzette Charles who was also African American.  Vanessa Williams still went on to have a successful career as a singer and actress.  Perhaps the scandal was just the kick-start her career needed; as an actress she has had roles on stage, television and film, and her cover of the Academy Award-winning song “Colors of the Wind” from the movie Pocahontas was especially popular.  The hit single “You Go and Save the Best for Last” has become her signature song. Despite all the controversy generated by the photographs and contrary to common belief, Vanessa Williams is still officially recognized by the Miss America Organization as “Miss America 1984.”

Explained away as a “wardrobe malfunction,” Janet Jackson’s infamous “Nipplegate” episode during halftime at Super Bowl XXXVIII in 2004 had possibly been staged in an effort to create controversy and to generate better ratings.  Instead viewers were shocked and enraged because many children had been watching the family event.  In total as many as 140 million people saw the “mishap” live.  As a result, a five-second delay was imposed for all broadcasts, and the music channel MTV was banned from any future involvement in American football halftime performances.

For her Oscar-winning role in Monster’s Ball, Halle Berry bared nearly all in an iconic sex scene which has become one of the most popular sex scenes to look up on the internet.  The first black woman to win the Academy Award for an Actress in a Leading Role, Berry has had no qualms about exposing herself for the development of her characters or for the increase of her pay; for her part in Swordfish, she earned an extra $500,000 for her first topless scene.

This supermodel of the 1990s was famously on a PeTA advertisement with other models declaring she would rather go naked than wear fur.  Then, in 2014, she sparked fury (not furry!) by posting on Instagram a picture of a Christmas gift that appeared to be a real fur.  Now considered a hypocrite, many surely wonder to what extent celebrities truly stand behind the products or concepts they endorse.  This was not the first time Naomi Campbell had let the People for the Ethical Treatment of Animals down; in 2009 she modelled a sable coat… naked!

Byrd, Ayana and Akiba Solomon.  Naked: Black Women Bare All About Their Skin, Hair, Hips, Lips, and Other Parts.  TarcherPerigee, 2005.