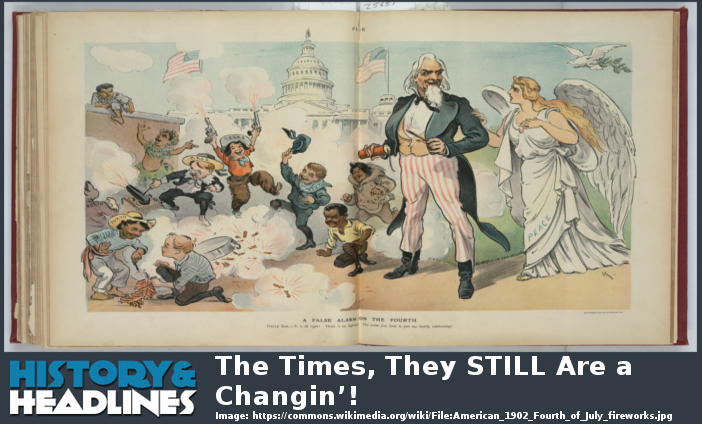 On July 4th, 2022, Americans celebrate their Independence Day, a holiday that signifies their freedom.  During the month of June 2015, Americans experienced a host of developments in the expansion of this freedom, so we of course featured an article about those changes.  In any case, to paraphrase Bob Dylan, the times sure were a-changin’ in June 2015, and here in 2022, those times STILL are a changin’!

Since 1991, when the Soviet Union collapsed and it seemed as if the Cold War was over, we have all lived under the belief that nuclear war or any sort of world war was highly unlikely.  Not so fast!  On February 24, 2022, Russian dictator Vladimir Putin ordered the irresponsible and uncalled for invasion of the neighboring country, Ukraine, pushing the conflict between Russia (the second most powerful country in the world militarily, and having the second largest nuclear arsenal) and the West, led by the United States and its NATO allies, to a highly charged and tense standoff, with Putin and his lackeys threatening nuclear war or “World War III” if the US or NATO “interfered” a little too much with Russia’s war of aggression.  We have gone from the giddiness of peace to the threat of global annihilation.  Thanks Putin!

Of course, groundbreaking, titanic changes strike closer to home (the USA) with a couple recent decisions by the Supreme Court of the United States (SCOTUS), a court packed with hard corps conservative judges appointed by the former president, Donald Trump.  One of those decisions have made local and state laws restricting the carrying and ownership of firearms, especially concealed weapons, more or less moot. (See New York State Rifle & Pistol Assn., Inc. v. Bruen).  Another momentous decision by the Supreme Court has decisively struck down the landmark 1973 decision in Roe v. Wade, the decision that made the right for a woman to have an abortion a constitutionally protected right.  With the new interpretation of the Constitution regarding abortion, each state will be free to make whatever laws they see fit to govern access to abortion.  In practical terms, this decision means many states will be outlawing abortion altogether, a factor that has already generated heated protests and at least a small number of violent incidents.  Look for this subject to continue to divide Americans and possible result in more violence.  While these Supreme Court decisions may be seen as good things or bad things, depending on your perspective, these changes are certainly major ones.

The world of sports and athletic events has also been a newsworthy factor in recent days, including the incredibly ill-considered move by the Cleveland Browns to trade for quarterback DeShaun Watson from the Houston Texans.  The Browns gave up an incredible 3 first round draft choices for the dynamic Watson, normally not such a ridiculous price for what could well be one of the best quarterbacks of this era in the NFL.  But, things are definitely NOT normal!  Watson comes with the baggage of at least 2 dozen complaints of sexual misconduct against him, making the price paid by the Browns seem waaaayyyy too steep considering the strong possibility that Watson will be forced to serve a long suspension (at least an entire season) or even possibly a ridiculously long suspension such as 2 complete seasons or even a lifetime ban.  Complicating things even more for the hapless Browns, there remains the possibility of even more women coming forward with civil or criminal complaints which could stretch out the time frame before Watson may be reinstated for duty on the field.  Over all this sordidness, is the fact that the Browns gave Watson an unprecedented guaranteed contract for $230 million over 5 years, the biggest pay day for ANY NFL player EVER, and with that cursed guaranty to boot!  Browns fans are not happy with the callous treatment of former Browns quarterback, Baker Mayfield, who was once the very first selection in the NFL draft and has been the face of the Browns since.  Mayfield played in 2021 despite having a broken bone in his left (non-throwing) shoulder, demonstrating toughness and extreme dedication to the team.  The blundering Browns have failed to trade Mayfield (as of June 28, 2022, when this article was written) and are likely stuck with paying half or more of his $18 million salary for whatever team Mayfield ends up with.  Wow!  What blunders!  Of course, Browns fans are not exactly happy about the team hiring a possible sexual predator to lead them, and many are not happy with the poor treatment of Baker Mayfield.  Other teams around the NFL are incensed at the Browns lavishing such a rich, guaranteed contract on Watson, a move the disrupts contract negotiations throughout the league.

The other incredibly dividing factor in sports is that of whether or not to allow transgender athletes to compete in the (new) gender they identify as, specifically biological males that have transitioned (to whatever degree) to “female” being allowed to compete in girls/women’s sports.  Recent months have seen the controversy over college swimmer Lia Thomas, born a male, that has been destroying female competition at the college level and has expressed the desire to compete in the Olympics.  After winning an NCAA Championship, Lia has since been (at least for the time being) made ineligible for competing against women.  The subject of whether or not to allow transgender athletes to compete in their chosen athletic gender division is not likely to be resolved soon, and not before even more vitriol and animosity is generated during the debate. Another such situation in the recent news was of a former man, 29 years old, now identifying as a woman, winning a girl’s skateboarding championship, decisively defeating the 13 year old girl that came in second…

Yet another unprecedented event is currently taking place, that being the multiple criminal investigations into the conduct of the former President of the United States, Donald J. Trump.  The ex-prez faces a congressional inquiry into his involvement in the US Capitol riots of January 6, 2021, and numerous other criminal and civil investigations into his conduct (and that of his supporters) regarding attempts to subvert the results of the 2020 presidential election.  Additionally, Trump faces even more criminal and civil investigations into his business practices and administration of his election campaign.  No other US president has ever faced such daunting legal battles upon leaving office.  In addition to the former president, Trump’s family members also face legal scrutiny (and possible jeopardy) as well as his many other associates and political allies, again, a totally unprecedented scenario.  Will this mean other presidents and their allies will also face such legal peril upon leaving office?  Time will tell…

Finally, “the times” have certainly changed for the worse when it comes to the price of gasoline.  Americans are paying the highest prices they have ever paid, and by a wide margin to boot!  While most places have seen the price per gallon recently dip below $5 per gallon, some places such as California could only dream of being so “lucky.”  Does this mean the long era of Americans feeling free to travel the road is over or coming to an end?  Will prices go back down to previous levels, or are we in an new age of exceedingly expensive travel by cars?

We finish our long lament about how times have changed and are changing with the fervent hope that next year we can report much happier changes have taken place or are in the works.  What do you think next year will bring?

Question for students (and subscribers): What social change or changes would you add to this list?  Please let us know in the comments section below this article.

Borysov, Davyd. Russia – Ukraine Conflict Made Simple: A Guide to Understanding the History of Ukraine and Russia, the Roots and Crisis that Led to the War of 2022.  Independently published, 2022.

The featured image in this article, a 1902 American cartoon about celebrating the Fourth of July, is in the public domain in the United States because it was published (or registered with the U.S. Copyright Office) before January 1, 1927.