On June 7, 1962, a right wing French Nationalist terror group, the Organisation Armée Secrète, usually referred to as the OAS, set fire to and burned the library at the University of Algiers in Algeria, destroying half a million books.  Calling themselves “counter-terrorists”, “self-defense groups” or simply “the resistance,” the aim of these French nationalists was to prevent the independence of Algeria, forcing the country to remain part of France.  Usually we think of terrorist groups as rebels or an independence movement, but in this case the group was trying to keep “France” as they saw it intact.

The post-World War II world was one in which many nations were clamoring for, demanding, and receiving their independence from colonial powers.  Indonesia, India, the Philippines, African countries, the Middle East (including the formation of Israel) and others were seriously independence minded and for the most part, the Western world saw self-determination as a national right, breaking with the long-standing colonial traditions.  Alas, not all Western thinkers saw the light, and a dedicated portion of Western people chafed against the changes in the status quo, changes that they saw as lessening the importance and power of the former colonial powers.

Western European colonial empires in Asia and Africa all collapsed in the years after 1945.  Map by en:User:Aris Katsaris.

The French had invaded and captured Algiers in 1830, incorporating Algeria as a French territory for the next 130+ years.  Many French people grew to accept Algeria as an integral part of France, part of the homeland.  Unfortunately, native Algerians did not necessarily agree!  Indigenous Algerians were mainly of the Berber people, and have been supplemented by Phoenicians, Romans, Greeks and other invaders, notably the Ottoman Empire (1516-1830) and the French (1830-1962).  Native Algerians mainly speak Berber (the national language) and Arabic, and are predominantly of the Islamic faith, about 98% of the population.

France, a mostly Catholic Christian country that speaks French and is of a different ethnic stock, is not surprisingly seen as outsiders to most Algerians.  During the long occupation of Algeria by France, many White French and other European people moved to Algeria.  When those European immigrants raised children, the Pied-Noir as they were called, developed a quasi-Algerian identity all their own. While Algerians saw other countries gaining independence from colonial powers from 1945 through 1962, France stubbornly held on to their African territory.  A guerilla war waged by independence-oriented rebels, some of which committed acts of terrorism, which coupled with the acts of terrorism by the OAS made for a bitter and gruesome civil war.  Resentment persisted after independence, and many (perhaps 900,000) of the Pied-Noir were expelled or fled from the newly independent Algeria. 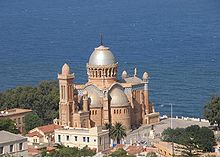 Notre Dame d’Afrique, a church built by the French Pieds-Noirs in Algeria.  The original uploader was Mehnimalik at French Wikipedia.

The independence freedom fighters of Algeria were brutal in their tactics to achieve independence and may have murdered as many as 150,000 Europeans in reprisals after independence.  For its part, the French government was also known to conduct reprisals against Algerians for terrorist acts committed by rebels during the war.  Both sides used torture as a means of obtaining intelligence and punishment.  By 1962 the war had taken hundreds of thousands of lives and had maimed hundreds of thousands of other people, almost all in Algeria itself, though some terror activity did take place in France.  In France, 91% of the electorate voted to give Algeria independence, and in Algeria well over 99% voted to accept independence.

The OAS was a group of people that just did not accept the inevitable course of events that would lead to Algerian independence.  Targets of their attacks included Algerians and also Frenchmen that supported Algerian independence, including politicians and private citizens.  Even French President and World War II hero Charles de Gaulle was a target for assassination by the OAS.  About 3000 OAS members were responsible for about 2000 murders during the one year period of April 1961 to April of 1962, a futile effort to stem an unstoppable tide of independence.  The Algerian War for Independence was fought in the shadow of the French-Indochina War, 1946-1954, which saw France humiliated at Dien Bien Phu in Vietnam in 1954.  French national pride was at stake and OAS members saw the loss of Algeria as a last straw type of situation. 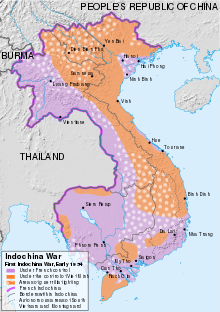 French nationalists still remember the OAS with a degree of fondness, especially in light of the recent tide of immigrant refugees to France and Europe from the Middle East which has reignited the fires of nationalism throughout Europe as well as France.  Will such feelings result in a rebirth of the OAS with its accompanying terrorist activity against immigrants and those that would perpetrate such immigration?  We shall see.

Questions for Students (and others):  Were you familiar with the OAS?  What other right-wing nationalist terror organizations do you know of?  Should Europe accept refugees from far off lands or deny such immigration?  Please let us know in the comments section below this article. 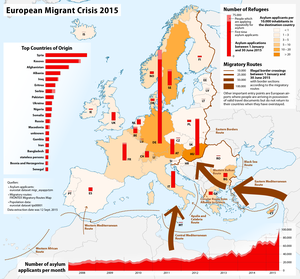 Shepard, Todd. The Invention of Decolonization: The Algerian War and the Remaking of France.  Cornell University Press, 2008.

The featured image in this article, en:OAS (Organisation armée secrète) underground organization emblem, has been released into the public domain worldwide by the copyright holder of this work, Germo (talk).