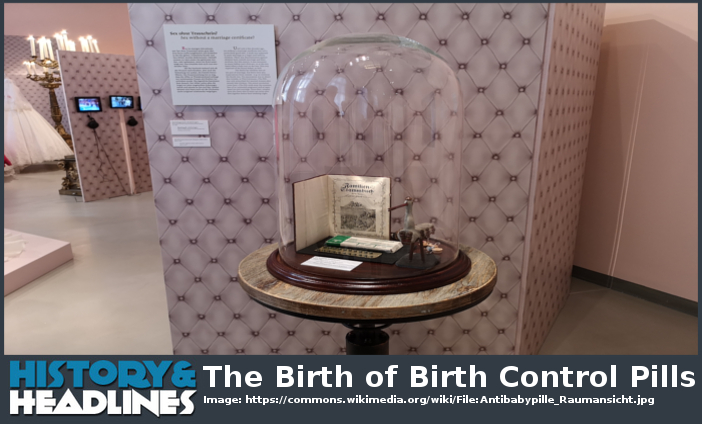 On May 9, 1960, the Searle manufactured drug, Enovid, was approved by the Food and Drug Administration of the United States as a birth control measure, making Enovid the first oral contraceptive pill approved for use by any nation.  While most American women rejoiced at the sexual freedom afforded by this “miracle” drug, not everyone was happy about the approval and to this day, such birth control drugs remain controversial.

A major boon to the Women’s Liberation Movement, American women largely celebrated the advent of this empowering drug that permitted women to avoid the “tyranny” of the threat of pregnancy every time they had sexual intercourse.  (See some of our many articles about women and women’s issues.)  In fact, a hit song was released by country mega star Loretta Lynn, “The Pill” though the song would not appear until 1975.  Even by 1975, the topic of contraception was still controversial enough in the repressed United States that the song was banned from the radio!

The long standing opposition to contraceptives by the Catholic Church and other religious organizations is fairly well known, but a pervasive groundswell of “moral” outrage over contraceptives, especially one controlled entirely by the female involved has remained, as evidenced by the late conservative radio host, Rush Limbaugh, who derided women that sought medical (health) insurance to pay for contraceptives as “sluts.”  (Consider this coming from a guy that was married 4 times and had no known children.  Did he and/or his wives engage in the use of contraceptives?  Heaven forbid, did he and his wives secretly believe in abortion?)

While opposition to oral contraceptive birth control has largely been based on religious and moral grounds, there are also medical factors involved in some of the opinions against such drugs.  Based on female hormones, oral contraceptives have been accused of leading to hypertension, deep vein thrombosis, stroke, tumors, cancers, blood clots, pancreatitis and other maladies.  Additionally, adverse drug interactions and adverse interaction with cigarette smoking have also played a role in the campaign against the use of oral contraceptives.  Weight gain with the early, high dose iterations of contraceptive drugs was a commonly reported side effect, though modern versions of the drugs contain lower doses of hormones and pose little risk of unwanted weight gain.  In fact, some health benefits have been observed, including lowered risk of uterine cancer and ovarian cancer, while incidence of pelvic inflammation is also reduced.  Even acne might be somewhat alleviated through the use of oral contraceptives, and “easier” menstrual periods are often a result of such use.

Today, in 2022, the reproductive focus of the United States is on the questions concerning abortion, with reports of a pending Supreme Court decision that will overturn the landmark Roe v. Wade case.  The implications of the possible overturning of Roe v. Wade may affect birth control pills as well, so watch carefully for developments in the abortion case for ramifications for birth control as well.

Regardless of your opinions about birth control in general and oral contraceptives in particular, the facts are that these topics have important implications, both legally and emotionally on the American public and may well affect you and or your family and friends.  While we do not pretend to tell our readers what is best regarding birth control, we do encourage our readers to research the topic and learn as much as possible about the subject before making any firm opinions.  (Such a policy is probably good advice concerning any important subject.)

Question for students (and subscribers): Should the US government supply birth control to all women and girls free of charge?  Why or why not?  Please let us know in the comments section below this article.

Brighten, Jolene. Beyond the Pill: A 30-Day Program to Balance Your Hormones, Reclaim Your Body, and Reverse the Dangerous Side Effects of the Birth Control Pill. HarperOne;, 2020.

The featured image in this article, a photograph by Medea7 of the first contraceptive pill in the Museum of European Cultures in the Wedding Dreams exhibition, is licensed under the Creative Commons Attribution-Share Alike 3.0 Unported license.