Saturday, January 25
Trending
You are at:Home»September»September 25»September 25, 2014: American Airports Have Lost Their Mojo!

On September 25, 2014, O’Hare Airport in Chicago regained its status as the World’s Busiest Airport, taking the title back from Atlanta’s Hartsfield-Jackson Airport.  Or not, depending on which source you cite.  The Atlanta airport had been the busiest in the world for all of the 21st Century up until either 2014 or up to the present.  The United States once had many of the busiest airports in the world, and some of the most modern and highest tech airplane launching sites but have slipped in recent years as other countries have built modern, higher technology airfields that often put US airports to shame.  How did we let this happen?

Cleveland, Ohio was once on the cutting edge of airport technology and operation, with the first ever flight control tower (1930), the first airport lighting system (1930), and was the first to have a ground-to-air radio control system (1930).  Opened in 1925, Cleveland Hopkins Airport (so named since 1951) was the first municipality owned airport in the world and was the first airport in the world to have a rapid transit system directly to the airport.  In 1968 Hopkins Airport became the first airport terminal to boast 2 levels.  Afterwards, like many American airports, Cleveland’s airport declined as the city lost population and sources of income.  Other American cities became the up and comers in airport design and operation, such as Atlanta and Denver, while the biggest American cities garnered more and more of the air traffic (New York, Chicago and Los Angeles).  In 1999 Hopkins handled over 13 million passengers, a number that has declined to a comparatively paltry 9.1 million by 2017, leaving Hopkins as the 43rd busiest airport in the United States, a far cry from its heyday as the preeminent American terminal.  There does appear to be hope for Amercian airports, as Cleveland Hopkins was named by the Airports Council International in 2018 as the Most Improved North American Airport.

Somehow along the way many of the traditionally busy American airports become old and dingy, run down embarrassments that lacked the sparkle and panache of airports in nouveau riche  oil producing countries and Asian airports.  These foreign jewel-like airports are truly international hubs, while American airports handle mostly American passengers.  President Trump, who for many years has traveled thousands of miles per year in and out of airports has referred to the airports that serve New York City as “third world.”  While many American airports are owned by cash strapped cities or counties, many foreign airports are owned and operated by the central governments as a national asset, or are wholly or in part privately owned.  Foreign airports derive 3 to 6 times as much of their revenue from at the airport concessions and stores compared to American airports.  The lack of decent shopping opportunities often stuns foreign passengers to American airports, and disappoints Americans that are subjected to outrageous prices and a lack of selection.  These spectacular foreign airports provide stunning architecture and works of art in shiny new settings, not so easy to accomplish with American airports limited in size by built up urban areas and a tradition of not letting the government run roughshod over the people (homeowners and such).

A major difference between American airports and foreign airports is parking.  Americans want to drive to the airport and park their cars, while most other locations in the world have a fraction of the private parking and instead rely more heavily on mass transit and shuttles.  The American airports that rank as the best (for passenger convenience and pleasant experience) serve cities that have recently grown considerably, far outstripping the older cities that used to dominate the highest population lists.  (Cleveland was the 5th most populous American city when its airport was the best, and Cleveland now ranks 51st in the US by population!)  Phoenix, Portland, San Diego, Salt Lake City and Honolulu top the list of “best” American airports in 2016, and in 2018 a serious shakeup of the rankings  saw Las Vegas, Orlando, Detroit, Denver and Dallas/Fort Worth become the top 5 (according to JD Power).  Detroit?  There IS some hope for older airports and older rust belt cities!

Detroit’s colorful Light Tunnel, with displays choreographed to music, connects Concourse A with Concourse B and C

So, improving American airports is possible, but of course those improvements cost money.  Where should that money come from?  Should the government owned airports be privatized?  Partially privatized?  Should the Federal Government take over the operation of airports, at least the major ones?  The United States still leads the world in number of airline passengers annually, almost double the number of China in second place. 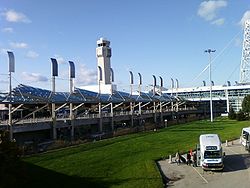 A view of the terminal at Cleveland Hopkins International Airport. The upper level is ticketing and the lower level is baggage.

Eiselin, Stefan, Laura Frommberg, and Alexander Gutzmer.  The Art of the Airport: The World’s Most Beautiful Terminals.  Frances Lincoln, 2016.

The featured image in this article, a terminal map of O’Hare Airport, 2008, has been released into the public domain worldwide by its author, User: (WT-shared) Peterfitzgerald at wts wikivoyage.