On August 21, 2019, we eagerly await the next NFL season.  Having already completed 2 of the 4 pre-season/exhibition games, many teams are already firming up the sort of team they expect to field when the hitting counts.  So who is going to win the big enchilada?  Read on for our picks for the NFL 2019-2020 season.

If you are interested in NFL Futures 2019-2020, Las Vegas gambling mavens like the Patriots.  We like the Patriots, too, but not enough to put them in the Super Bowl, let alone win the NFL Championship (again).  We predict Tom Brady is just about out of magic at the age of 42.  While he is still probably one of the better quarterbacks in the NFL, we just have a sneaking suspicion that his age will make him prone to injury and not so prone to rapid healing.  Despite being the odds-on favorite, we do not agree.  The Patriots will probably not even win their division. Brady is signed for this year and next season for an incredible $70 million!  In 2019, Brady led the Pats to Super Bowl victory, but only by the score of 13-3 over the Rams.  For the first time in 9 Super Bowls, Brady did not throw a touchdown pass.  We take this fact as a clue that the perhaps best quarterback in NFL history is on the downslide.

How about the Rams, the Super Bowl runner up?  Odds makers have them 3rd to 4th as favorites to win it all.  We agree.  The Rams are about as good a bet as any to once again go to the Super Bowl, though we do not pick them to win!  We believe the New Orleans Saints are the best bet to represent the NFC in the Super Bowl, and Las Vegas oddsmakers generally agree.  The Bears are the only other team we think that has much of a chance of taking the NFC crown and going to Super Bowl LIV in Miami on February 2, 2020.

Okay, so if the Patriots are not going to Miami, who in the AFC is going to represent?  We predict the Cleveland Browns.  Last year rookie quarterback Baker Mayfield had arguably the best rookie quarterback season in NFL history, and is healthy and eager to take it to the next level.  Adding excellent receivers (Odell Beckham, Jr for one) to an already good receiving corps and about as good a squad of running backs in the NFL implies a potent offense for the Browns.  An improving defense in 2018 is looking even better for 2019, and team chemistry is excellent.  The chips just seem to be falling the Browns way, and all we have to do is sit back and hope injuries do not spoil the season.  Las Vegas oddsmakers have the Browns as about the 3rd most likely team to represent the AFC in the Super Bowl, but we think they are missing out on the intangibles.  The Browns have never been to a Super Bowl, and despite having recently had horrible seasons loaded up the team with enthusiastic team players that are ready, willing, and probably able to make a big statement on the field.  The team has won both of its pre-season games so far and is clicking. 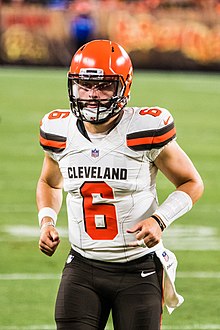 Mayfield in 2018.  Photograph by Erik Drost.

So who do you think is going to win it all?  Questions for students (and subscribers): Is Baker Mayfield ready to move up to the top tier of NFL quarterbacks? Is Tom Brady declining, or still the best?  Please let us know in the comments section below this article.

The featured image in this article, a photograph by Erik Drost of the Cleveland Browns offense going against the Washington Redskins during a preseason game on August 8, 2019, is licensed under the Creative Commons Attribution 2.0 Generic license.  This image was originally posted to Flickr by EDrost88 at https://flickr.com/photos/62091376@N03/48532448921. It was reviewed on 17 August 2019 by FlickreviewR 2 and was confirmed to be licensed under the terms of the cc-by-2.0.