Thursday, July 9
Trending
You are at:Home»August»August 2»Officer Daniel Pantaleo Should NOT be Fired!

On August 2, 2019, word of a decision by a New York City police judge to ask the Police commissioner to fire Officer Daniel Pantaleo was made public.  Pantaleo was almost immediately suspended from duty.  Pantaleo was the officer involved in the tragic case in which career petty criminal Eric Garner died shortly after being arrested for selling loose cigarettes in 2014.  The case became infamous as the “I can’t breathe!” case, with Pantaleo being accused of putting Garner in an “illegal” choke hold.  (Note: Despite the fact that you will see over and over on television and in print that the “choke hold” was “illegal,” the fact is the so called choke hold is NOT illegal, just proscribed by NY City Police procedures.)  The highly emotional case has been exacerbated by the irate family of Eric Garner, with his widow demanding “civil unrest, and it won’t be pretty” if Pantaleo is not fired.

The arrest of Garner was videotaped (by a man arrested a month later on weapons charges), and became a flashpoint across the United States, with police actions by NYPD savaged by the mass media and various web sites, including Russian internet and social media trolls seeking to inflame racial animosity in the United States.  In fact, the Russians are STILL trying to generate racial discord in the US.  US media and politicians have repeated the allegation over and over that Pantaleo used a “choke hold” banned from use by NYPD procedure on the 6 foot 3 inch 350 Garner, but State and local judicial systems decided Pantaleo had indeed used a “headlock” sort of takedown, and did not in fact use a “choke hold” on the giant criminal.  Garner was resisting arrest, and Pantaleo was compelled by his duty to arrest the man to try to subdue the guy.  Not equipped with a TASER or other less lethal option, Pantaleo struggled to physically arrest the resisting criminal, who could be heard on the video saying, “I can’t breathe.” 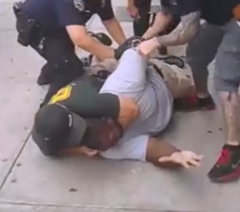 A screenshot of Garner tackled by the NYPD.  Video by Ramsey Orta.

When a choke hold is applied, the person being choked cannot state in an understandable way anything, thus it is obvious that Garner was NOT in a choke hold.  This fact, and review of NYPD procedure kept Pantaleo from being prosecuted criminally and from being prosecuted by the Federal Government for civil rights violations.  Unfortunately, the tragic death of Garner has many people demanding “justice” for Garner, especially his bereaved family, which is understandable, especially considering the misrepresentation of what had occurred by the media and politicians eager to capitalize on a tragedy.

Garner suffered from severe asthma, which almost assuredly was the main factor in his death.  He was also obese and suffered from a heart condition and other ailments.  He made the decision to physically resist arrest.  NY medical rescue people that responded to police calls for medical assistance for Garner apparently did not properly do their job, as they were later punished with suspensions for their lack of proper actions.  Garner died in the ambulance, not on the scene. 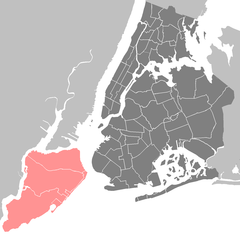 Death of Eric Garner is located in Staten Island.  Map adapted by M.Minderhoud.

The trivial nature of the crime for which Garner was going to be cited, selling loose cigarettes, also greatly aggravated the discussion of his demise.  Pantaleo and the other police on NYPD are not the ones that sit back and decide to pursue such petty crimes but are directed by politicians and high ranking police supervisors to go out and arrest these “dangerous” criminals.  The crime fighting theory of “broken windows,” under which petty crimes and vandalism are aggressively addressed is supposed to reduce more significant crimes.  Some indications are that this theory does indeed work, as does the much maligned “stop and frisk” tactic.  Both of these police tactics have been questioned as potentially racially discriminatory against persons of color.  The decision whether or not to utilize the “broken windows” and “stop and frisk” tactics is usually reserved by politicians and supervisors at the highest levels, and the police officers actually on the street ordered to implement the tactics are merely pawns in a political game, sadly, often thrown under the bus when something goes wrong.  (And by “wrong,” we mean politically damaging to the bosses and politicos.)

Eric Garner was an unhealthy person that had been arrested something like 30 times before his fatal incident.  He would not stop his petty crimes despite numerous sanctions by authorities.  When approached by Pantaleo and other police, he refused to cooperate to be cited, and then refused to be arrested.  He pushed away the police and tried to avoid being handcuffed.  In an effort to avoid serious injury, the much smaller police officer (Pantaleo) tried to take Garner to the ground while using a sanctioned NYPD technique called a “seat belt hold,” a sort of headlock.  During the physical struggle, Pantaleo’s arm was around Garner’s neck, but not in the position necessary to actually choke someone.  Pantaleo did not intentionally nor even accidentally actually choke Garner. 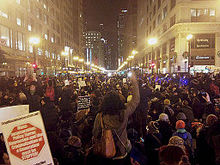 Public hysteria and strident demands that Pantaleo be charged with a crime or crimes and certainly fired, despite ignoring the actual facts of the case, do not serve the people of New York or the people of the United States.  We have procedures and a mechanism by which incidents are examined, and undue pressure on those tasked with the investigation and recommendations have no place in our system of justice.  Reckless and inaccurate claims should not wrongly influence the decision to fire or not fire Daniel Pantaleo, and that decision greatly affects the ability and desire of the NY Police Department officers (and officers across the country) to do their job.

Sure, Black Lives Matter.  No kidding.  Anything else is just stupid.  Blue lives matter, too, and by demonizing our police we are making all of us less safe and enabling those that would take advantage of the situation.  In New York, a new sport has emerged, that of dousing police officers with buckets of water or otherwise soaking uniformed cops.  Cops being attacked in this manner have been afraid to react in a normal way and have allowed the idiotic behavior to continue.  (This response is changing.)  Is this what Americans really want?  If it is what you really want, be sure to call a hooligan or vandal next time you need help. 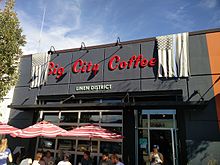 Policing in the United States is at a crisis.  In a large suburb of Cleveland, Ohio, 400 to 500 applicants used to show up to take the police test.  Now you get about 50.  And this number is for a job that offers a pension, benefits such as vacation, sick time and health insurance, and pays a decent wage.  (Top suburban police departments can easily top $60,000 per year, before overtime and allowances, etc. for patrolmen, the lowest rank of police officer on most departments.)  If we want applicants for police jobs that are intelligent, physically fit, of good character and with some education, we cannot reasonably expect to get these police recruits that we think of as ideally suited for the job by continuously undermining their efforts to do that job!  By firing Daniel Pantaleo, cops across the United States are put on notice to avoid confrontation at all costs or suffer the fallout from feckless politicians and expect to be crucified in the media, with little support from higher ups.  Quality police recruits are likely to head toward other occupations.

Question for students (and subscribers):  Do you believe Police Officer applicants should be college graduates in good shape, with exceptional intelligence and character? Are you willing to pay the price to recruit and retain such high quality cops?  Please let us know in the comments section below this article.

A photograph by The All-Nite Images from NY, NY, USA of an Eric Garner Protest 4th December 2014, Manhattan, NYC is licensed under the Creative Commons Attribution-Share Alike 2.0 Generic license.

Horace, Matthew and Ron Harris. The Black and the Blue: A Cop Reveals the Crimes, Racism, and Injustice in America’s Law Enforcement. Hachette Books, 2018.

Pegues, Jeff. Black and Blue: Inside the Divide between the Police and Black America. Prometheus, 2017.

The featured image in this article, a photograph by The All-Nite Images from NY, NY, USA of an Eric Garner protest on 4th December 2014, Manhattan, NYC, is licensed under the Creative Commons Attribution-Share Alike 2.0 Generic license.  This image was originally posted to Flickr by The All-Nite Images at https://flickr.com/photos/7278633@N04/15948996402.  It was reviewed on 6 November 2015 by FlickreviewR and was confirmed to be licensed under the terms of the cc-by-sa-2.0.